Tolkien gave his reader his version of how the Universe was created – with Music! Ainulindale might be the Catholic equivalent of San Francisco in the 60s. Joaquin Miller wrote Song of the Sierras, and Songs of the Sun-Land. I am considering a book and movie with a Western Musical Theme. The Hope and Light of the World rests Out West. I founded the Nation of Fromond to counter the Red State Neo-Confederates.

Joaquin Miller had dinner with the Pre-Raphaelites and was my grandmother’s friend. This history is being compiled for the grant I am applying for. The history of the Pre-Raphaelites has not been discarded. Miller built a monument to my kin, John Fremont, the first Presidential Candidate for the Abolitionist Republican Party, and the first to emancipate slaves, forcing Lincoln’s hand. Miller may have met William Morris who was a great influence on Tolkien.

Augustus John was the inspiration for the artist Gulley Jimson, in ‘The Horses’ Mouth’. Gulley is in search of the perfect wall for his mural. Joaquin Miller is our Washington. He earned an estimated $3,000 working as a Pony Express rider, and used the money to move to Oregon. With the help of his friend, Senator Joseph Lane, he became editor of the Democratic Register in Eugene. a role he held from March 15 to September 20, 1862. Here is Miller’s daughter.

George Miller platted the City of Florence and Fairmont. He designed a flying machine. Ali Emami’s plan to knock down walls to save the square is right out of ‘The Horses’ Mouth’. This is high drama already in progress! Above is a photo of Augustus John with James Joyce. Get rid of the One Hook Town to hang your hat. We need a Jimson reader, there, confronting passer-byes! We only got one horse on our merry-go-round. Enough! Here’s Miller with George Sterling the co-founder of the Bohemian Club and Carmel. We can reprint old copies of ‘The Augur’. 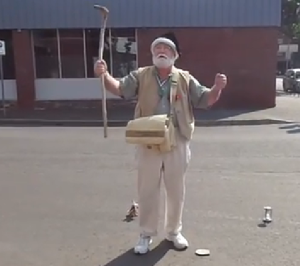 My friends and I in Oakland were doing Miller before we heard of Kesey. You got to get over the idea folks are trying to do Ken – and move on!

In November 1867, Whymper arrived back in England where his account of his travels, Travel and Adventure in the Territory of Alaska, was published in 1868. In 1869, he went back to the United States, by way of New York to San Francisco and worked on the staff of the newspaper Alta California. City directories describe him as an artist and mining engineer, and in 1871 he was a founding member of the San Francisco Art Association.

The Bohemian Club is a private club in two locations: a city clubhouse in the Union Square district of San Francisco,California, and the Bohemian Grove, a retreat north of the city in Sonoma County.[3] Founded in 1872 from a regular meeting of journalists, artists and musicians, it soon began to accept businessmen and entrepreneurs as permanent members, as well as offering temporary membership to university presidents and military commanders who were serving in the San Francisco Bay Area. Today, the club has a diverse membership of many local and global leaders, ranging from artists and musicians to businessmen.

In New York City and other American metropolises in the late 1850s, groups of young, cultured journalists flourished as self-described “bohemians” until the American Civil War broke them up and sent them out as war correspondents.[4] During the war, reporters began to assume the title “bohemian,” and newspapermen in general took up the moniker. “Bohemian” became synonymous with “newspaper writer”.[4] California journalist Bret Hartefirst wrote as “The Bohemian” in The Golden Era in 1861, with this persona taking part in many satirical doings. Harte described San Francisco as a sort of Bohemia of the West.[5] Mark Twain called himself and poet Charles Warren Stoddard bohemians in 1867.[4]

The Bohemian Club was organized in the Chronicle office by Tommy Newcombe, Sutherland, Dan O’Connell, Harry Dam and others who were members of the staff. The boys wanted a place where they could get together after work, and they took a room on Sacramento street below Kearny. That was the start of the Bohemian Club, and it was not an unmixed blessing for the Chronicle because the boys would go there sometimes when they should have reported at the office. Very often when Dan O’Connell sat down to a good dinner there he would forget that he had a pocketful of notes for an important story.[6]

The Eugene Augur was a local countercultural underground newspaper published inEugene, Oregon, United States, from 1969 to 1974. Starting with its first issue dated October 14, 1969, the Augur, produced by a cooperative of left-wing political activists aligned with the antiwar movement, appeared twice a month, offering up a mix of New Left politics and acid rock counterculture to an audience of students, hippies, radicals and disaffected working class youth in the Eugene area. The paper’s coverage ranged from antiwar demonstrations, exposing local narcotics agents, and rock festivals, to the growth of backwoods communes in Southern Oregon and the annual Oregon Renaissance Faire.[1] In August 1972, the paper cut publication to a monthly schedule. Staffers included Peter Jensen and Jim Redden, son of a prominent Oregon politician and later a reporter for the Portland Tribune.[2][3]

“I know a chap, a friend of mine, who used to paint girls for magazine covers. The best class of girls, eleven feet high with eyes as big as eggs. Well one morning he put on his best suit, called a taxi and drove to the Tower Bridge, where he tied his legs together, put ten pounds of lead in each pocket, took a pint of poison, cut his throat, shot himself through the head and jumped over the parapet. They saw through this job at once, picked him out, pumped him out, sewed him up, plugged him up, and had him back to work in six weeks.—Gulley Jimson in “The Horse’s Mouth” by Joyce Cary.

“Ali Emami, owner of the two buildings that have common walls with the plaza, says that when he heard rumors the public space might be sold and developed into apartments, he came before the Eugene City Council last week to again renew his offer to open up the walls of the buildings and make the space more inviting.

The square, also known as Broadway Plaza, is home to food carts, public art and periodic gatherings, but it also garners complaints about the unhoused youth and travelers who hang out there. A frequent criticism of the space is the tall brick walls on the south and east sides of the square that close it in.”

I see the whole square famed in durable glass that can be touched and read on the outside. One can read the job listings, or, search the internet. One pays $2.00 dollars admission and gets a paper. Seniors and the physically disabled get in for free. I see a man dressed like Joaquin pointing to his brothers flying machine suspended from the ceiling. Children are allowed to touch the old printing presses.

George J. Buys and A. Eltzroth purchased the paper in December 1869, and six months later bought out Eltzroth.[6] Buys sold the paper eight years later to John R. and Ira Campbell, who would remain owners for 30 years.[6] In 1890, the Eugene Guard became a daily newspaper.[6]

George Melvin Miller was titled ‘The Prophet of Lane County’. Lane County was named after Joseph Lane who ran with John Breckenridge for the White House.

He is said to have been the model for the bohemian painter depicted in Joyce Cary‘s novelThe Horse’s Mouth, which was later made into a 1958 film of the same name with Alec Guinness in the lead role.

John was known as a colourful personality who adopted an individualistic and bohemian lifestyle. Intrigued by gypsy culture and the Romany language, he spent periods traveling with gypsy caravans over Wales, Ireland, and Dorset. He based much of his work on these experiences, such as the painting Encampment on Dartmoor (1906). John was more modern in his approach to landscape painting, as seen in the bright palette and loose brushwork of paintings such as Llyn Trewereyn (1911–12) and The Little Railway,Martigues (1928).

1 Response to Ainulindale and Joaquin Miller