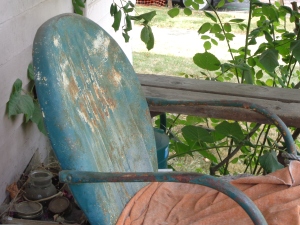 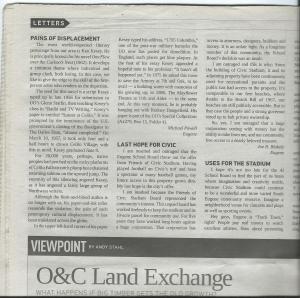 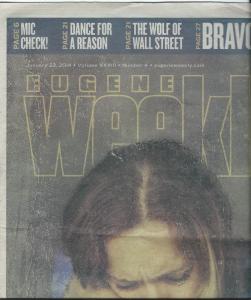 Today, after Zane Kesey questioned the accuracy of the video I posted on his Facebook, I returned to 1795 Columbia Street in Eugene where his father lived, in order to find the man the Mailman told me about back in March of 2014. To my dismay, the Kesey cottage was torn down and turned into the Wasteland that the renowned Scholar, Elzbieta Oleksy, referred to when she called Cuckoo’s Nest a modern grail legend.

I walked up to the door of this house, saw it was ajar, and gave a shout-out. I did not want to bother the cats, and turned to walk away. Michael Powell came out and greeted me. I turned to behold another Grail Knight at the end of the Quest into the Wasteland. He would soon tell me he can’t get any respect, and to be on this quest, would hurt me. We were in our bloody armor doing Rodney Dangerfield – and having a great laugh!

“Do you want to come in or sit on the porch?” Michael asked, after hearing why I was here.

“The porch. I want to look at this rusty old chair while we talk.”

Michael came out with a book about Ken Kesey, that may not be in the Kesey mural, and opened it to the page that says Ken lived at “1795 Columbia” that was torn down six months ago. We both tried to save it. In an article that appeared in the Weekly (1-23-14) Michael says if we were in England that cottage would get a blue plaque. He also said Ken asked that the Armory be saved. It was torn down. After seeing this article, I sent Jon Riuz a e-mail where I talked about my idea for those cottages. His response;

I posted my plan on Kitty Piercy’s Faceboke, then went to the Eugene Historic Revue Board, and was shocked the man who was in charge of preserving structures as historic sights, was not working anymore. Nor was he fired. He was in limbo because of funding.

I was given two numbers, and no one called me back. I then called the UofO. A young woman could not grasp what I was asking her. She said there was a Kesey archive. I had another project going, and talked to the President of Windemere. Then, it was First Friday Artwalk. I thought I would go look for a helper after one guy did not show for a lunch. I see musicians playing in Ken Kesey Square. A young woman takes my phone number. We meet for two hours, then, after she sends me her poem for my critique, I am getting death threats from homeless anarchists who are trying to take over Ken Kesey Square. What did I say! This is what Michael was talking about. The rabble will drag you off your horse and open you like a can of tuna.

“I can’t get any respect!” Says this former teacher at the UofO.

I have avoided going downtown for eighteen months. If the Keseny mural was unveiled there, I would not have gone, and would not have met Nancy, who would not have told me Erin Sullivan was one of the artists who painted the Creamery Mural, that Erin supplied the lost image of.  CONNECTIONS! SYNCHRONICITY! Hold on to your hats, folks, for the Cosmic coincidences are really going to blow.

“You’re getting it from the source.” Michael says as he shows me a quote for Ken saying he lived at 1795 Columbia.

All of a sudden my Cosmic Trigger goes off!”

“Oh. that’s it. The Horses Mouth. That was the movie going on with the Kesey mural un-veiling. Have you seen the movie with Alec Guiness?”

“My friend just recommended that movie to me – yesterday!”

My reader now has a choice of sound tracks for what you are going to read next. Here is the music used for the soundtrack of The Horses’ Mouth’.

Here is the ending of the movie The Da Vinci Code. Note the book that Langston opens ‘The Divine Feminine’ On the cover is Botticelli’s Venus, who I compared to my hostile Muse, Belle Erin Berch, with, the song St. Stephen’s Rose being sung in the background. Here is the album cover. The Sleeping Beauty in the Louvre MUSEum, is called Rozmund. What name do you hear?

Michael rises from the bench to go get what he considers to be a Literary Grail. He shows me Ken Kesey’s short story ‘Sunset at Celilo’. He reads the words Ken wrote and tells me he believes this story was the harbinger of ‘One Flew Over The Cuckoos’ Nest’. Most of the people surrounding Belle in Ken Kesey Square are mentally ill, Many of them have been institutionalized. This Bohemian scene was their break-out moment.

Michael’s cat ‘Smoky’ fell in love with me and wants me back for another visit.

“He doesn’t take to strangers. Must be something you got going he likes.”

When I got home and looked at FB, Stephanie Kesey had written;

“Faye showed me this place. It is the first place that they lived together.”

A blue plaque is a permanent sign installed in a public place in the United Kingdom and elsewhere to commemorate a link between that location and a famous person or event, serving as a historical marker.

The world’s first blue plaques were erected in London in the 19th century to mark the homes and workplaces of famous people.[1] This scheme continues to the present day, having been administered successively by the Society of Arts (1867–1901), the London County Council (1901–1965), the Greater London Council (1965–1986), and English Heritage (1986 to date).

Here was the idea I presented to several people that are running Eugene.

I was twelve when I came upon the Woodminster amphitheatre. I was put in a trance by what I beheld. I sensed I had entered the real world, the one I belonged in. Juanita Miller was the visionary for this outdoor theatre where plays inspired by her father were performed. Redwoods were planted around Woodminster. George Miller planted many trees in his visionary city, Fairmount. Nearby, my great grandfathers had picnics. Note the rifle hanging in the tree. The Stuttmeister farm lie just below this

structure that is right out of Lord of the Rings.

Yesterday I presented to Mayor Kitty Piercy my idea for the New Eugene Celebration that would be centered around the Cuthbert Amphitheater and the Mill Race that I see as flowing from the Woodminster Amphitheater Cascade. I see O Lake as a reflecting pond. I see a Japanese arch at the end of a pier where is docked a Japanese boat. Up the hill is a Zen Garden and the cottages rescued from Columbia Terrace located in the lost city of Fairmont platted by George Melvin Miller, the brother of Joaquin.

There is a Writer’s Grove planted next to the cascade. I see a similar grove planted near the Cuthbert. Where will sit the two Craftsman housed rescued from Columbia Terrace. Once house will be a Miller Brother’s Museum, and the other a Museum of Bohemian Art and Literature. Ken Kesey lived in one of the barracks that was moved from Fort White. I see a Museum to Peace, with Kesey and Hippie memorabilia. Our Mayor should contact officials I Japan to see if they see these barracks that once housed soldiers destined to go to war with Japan, of historic significance.

The Calm Waters of Peace, Poetry, and Art, flow underground all the way from Oakland California, and surface in a New Arcadia in Eugene. From brother to brother. let there be a New Cultural Unity!.

EUGENE, Ore. – Things may be coming full circle for a cluster of cottages at the University of Oregon.

The buildings – believed to have once been home to soldiers during World War II – are in the running to once again house those who served our country.

The 15 structures on Columbia Street between 17th and 19th avenues need to go to make room for the university’s new central kitchen. Twelve of the buildings made up the housing complex known as Columbia Terrace.

According to an article written by George Kramer in the Oregon Encylopedia, the cottages were moved to their current location after they provided shelter for soldiers at Camp White during World War II.  The University of Oregon bought the land 40 years ago and turned the cottages into student housing.

Students vacated the cottages last summer in anticipation of the new development.

The $8.5 million new central kitchen will replace two smaller ones currently located in Bean and Carson halls. Those two kitchens provide over 10,000 meals a day. A wood shop will also occupy the site.

The original plan was to demolish the houses, but the university is now considering alternatives.

“You know we’re very much into sustainability and recycling so if the houses can be moved in whole that would be terrific,” said Michael Griffel, Director of Housing at UO. “There’s been interest expressed by a number of parties for those properties.”

Eugene City Manager Jon Ruiz is one of the people who Griffel says asked him about the structures.  A spokesperson for the city said Ruiz would like to see the buildings repurposed as veterans housing.
Other private citizens have also expressed interested in renovating and restoring the structures for use as veterans housing, including members of the Eugene Historical Review Board.

“We are hoping very much that the properties can be reused,” Griffel said, but they won’t know for sure if the buildings can be salvaged and relocated until construction starts.  “Like many intensive projects, until they actually get into it and have engineers try to move them, they aren’t going to know for sure how they’ll tolerate it.”

1 Response to The Columbia Street Grail