Cortez Crucified Jesus while Omar stood by and watched!

I believe Evangelical Leaders like Franklin Graham stepped up their fifty year plan to Remissionize America, the day Trump swore on a Bible. There is some evidence Columbus was a Jew who helped the Sephardic Jews Colonize the New World. Omar has said the Jews were involved in Slavery. This is true! My information does not come from Farakan. The Muslims have long had good relationship with the Jews, especially in Spain. Islam protected the Jews from the Christian Crusaders.

I invite Ed Ray and his crack team of historians to investigate the murderous aggression of the Jews and the Christian Missionaries. As if I was a Prophet, I told the President of Oregon State University, that making my dead kin, Senator Thomas Hart Benton the Scapegoat, and then crucifying – will not do! I told him and his Squad to study the aggression of the Evangelicals and how they turned Jesus into a Capitalist Exploiter of just about everything! Did he smooth-talk teenagers into going to Epstein’s Island of Teen Lust? Did he stop short of doing that? Where is the voice of Jesus on this matter.

Ed and His Squad utterly ignored me – after asking for feedback! They never considered Benton had a living relative. They thought if they just ignore me – I would go away!

In one of my e-mails to Ray I said he would not mention the Christian Missionaries in the Americas lest funding from the Alumni and Rich Republicans – dry up! Coward! He knew Joseph’s Gang was heading toward the missionaries. Talk about White Supremacy, and Manifest Destiny!

Wolf on CNN just quoted Jesus to a Republican. I suggest the Democrats come up with a Bill that accepts the true teaching of Jesus, and throws out all the self-serving fiction.

I have suggested blacks in the south move to Brazil, and blacks in Brazil move to Portugal. Below are my prophetic posts on obscure issues that are now at the top of the Topical List.

I just discovered Cortez was a bartender. I wondered how she was able to handle those Republicans who are Drunk on Jesus – with mature experience!

“You’re full of shit! You’re eighty-sixed! Get out of here! Go home! Lay your delusions on your wife! I’ve had it up to here Mr. Pinocchio!”

I think the reason Trump took it back, because he realized Megan, Duchess of Sussex was watching – along with the Royal Windsor’s!

Get out of the Republican Party founded by my kindred! Get out!

A police officer in Louisiana suggested in a social media post that Representative Alexandria Ocasio-Cortez should be shot, calling the progressive Democratic congresswoman from New York a “vile idiot.”

“This vile idiot needs a round,” officer Charlie Rispoli wrote in a Facebook post referring to Ocasio-Cortez last week, according to a screenshot first reported by New Orleans news site NOLA.com on Saturday. “And I don’t mean the kind she used to serve,” he continued. Before becoming a member of Congress, Ocasio-Cortez worked in a New York City bar as a bartender.

Rispoli, according to NOLA, has been on the Gretna police force since 2005. The department’s police Chief Arthur Lawson told the local news site that the post was “disturbing” and appeared to violate the department’s social media policy. Although he said he did not believe it was an actual threat against the congresswoman, he promised the situation would be dealt with.

Two fleets set sail from Spain’s Port of Palos on August 3, 1492, floating together down the Rio Tinto. On one vessel was the final batch of expelled Jews, who, rather than repudiate their faith and become conversos (Christian converts) in the face of death if they remained in their home country, set out for an unknown fate in a new world. Leading the other ships, named the Pinta, Niña, and Santa María, was a little known explorer named Christopher Columbus.

Whether fact or legend, there are those who say that Columbus set out with the expelled Jews because he had stalled his voyage, originally set for August 2, by one day; that year, August 2 was the commemoration of Tisha B’Av, a fast day of mourning for the fall of the Jewish Temples. 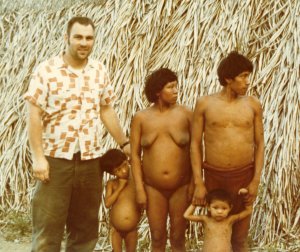 The Panare Indians (Native Americans) of the Colorado Valley had lived quiet, secluded lives for centuries. Until one day Christian missionaries came to visit them. They entered with open, loving arms in the name of Jesus and were given a respectful, friendly welcome. Unknown to the Panare, the missionaries’ intentions was to convert these “heathens” into good Christians. So, they began teaching them the bible; telling them how to get into heaven. Of course they had a hard time convincing these Natives of how sinful, and evil they were. The language barrier presented a major problem. But their primary obstacle was getting the natives to understand how Christianity functioned. There were no words in the Panare language for sin, guilt or redemption because these were a people with their own spiritual beliefs and customs that were in place centuries before the bible, Jesus Christ or Christianity ever existed.

But in order to instill a concept of redemption these Christian missionaries had to make the natives feel guilt and shame. But the Panare Tribe still wasn’t buying what these good Christians were selling. So, the missionaries decided to translate the New Testament into the Panare language. The Christian missionaries revised the New Testament, took Judas, Pontius Pilot and the Romans out and replaced them with the Panare. That’s right; they gave them a bible that now said the Panare Indians killed Jesus Christ. It included statements like: “Let’s kill Jesus Christ,” said the Panare….”They laid a cross on the ground and nailed him to it….they raised him straight up, nailed….thus the Panare killed Jesus Christ!”

Then came God’s wrath for killing his son. The revised bible said: “God will destroy the Panare. God will burn you all; burn all the animals, your children and burn also the earth. God will exterminate the Pinare by throwing them on the fire.” The missionaries told the natives that they had to pay for what their ancestors had done and their only salvation was in serving them and the church. But God is good. ‘Do you want to be roasted in the fire?’ asks God. ‘Do you have something to pay me with so that I won’t roast you in the fire?’ Demands God. One native lady yelled out “I don’t want to burn in the big fire. I love Jesus.” Hundreds of Panare indians abandoned their ancestors and took up Chritianity. That was in 1976 but these type of terror tactics were frequently employed to convert often hard to convince Natives. For years, it had been a common practice among Christian missionaries to accuse Indians (Natives) of killing Jesus Christ.

These are the exact same methods used against Africans and their children (black Americans) to this very day. Just like us, they were told the book they were given was God’s word. It was not. They committed what King James and the Jewish Scribes had been doing to persons of African descent for centuries; spiritual terrorism. No one wants to burn in “the big fire” so we all converted.

“The role of a missionary is to infiltrate a tribe, and convince or coerce them into rejecting their own spiritual beliefs in favor of the Christian Church.”

So, who won the war fought between Jesus and the Indians? Jesus! And to this day Natives and Blacks have never recovered. This is Christianity and these are the Christians.