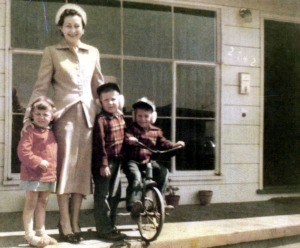 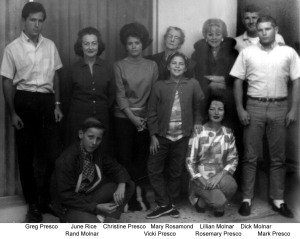 On August 2, 2020, I John Gregory Presco, recognize June and Vincent Rice as my parents of The New Life and Body I took after my Death Experience in in 1967. My aunt and uncle took care of me after I came down with Whooping Cough when I was eleven when I went to  Van Nuys California to stay with my aunt Lillian and Uncle Dick, who saved my life.

June and Vincent did not have any children. They treated me like their son. I worked for Vinnie and gave him a painting. He got me a commission to do a painting, and saved one of my early works. Vincent left our relatives a half million dollars.

Because my daughter, Heather Hanson, signed a legal agreement to be my Trustee and handle the legacy of my late uncle, she acknowledged she is my daughter, and vise versa. Vinnie showed me the Rice coat of arms on his wall.

Aunt June was the eldest of the four Rosamond girls. She took care of everyone as my grandmother made hats to support everyone. My mother got involved in crime and the Mafia and had to flee to Los Angeles. Rosemary considered putting us up for adoption. The Rice’s talked her out of it.

Recorded as Rice, Ryce, Rhys, Reasce, Reece, Rees and Reese, this is regarded as a Welsh surname but is equally English. It originates from the pre 7th century Olde English personal name Ris or Rhys, meaning “ardour or sometimes “fiery warrior”. The name first appears as “Hris” in the Anglo-Saxon Chronicles for the county of Cambridgeshire, in the year 1052, and as Rees in the Domesday Book of Cheshire, dated 1086. It was also the name borne by the last ruler of an independent Kingdom of Wales, Rhys ap Tewder, who died in 1093, after unsuccessfully opposing the Norman advance. The surname was first recorded at the beginning of the 13th Century (see below), and other early recordings include: John Rees, who appeared in the 1288 Fine Court Rolls of Suffolk, and Walter Rys, who was recorded in the Subsidy Rolls of Worcestershire, dated 1327. In 1536, Richard Rice or Price was the abbot of Conway in Wales, John Ryce appears in the Hearth Tax rolls of Suffolk in 1524, whilst on August 29th 1591, Griphin Rice and Agnes Careless were married at St. Margaret’s Church, Westminster. An interesting namebearer was Edmund Ignatius Rice (1762 – 1844), who founded the (Irish) Christian Brothers Order in County Waterford in 1808. A coat of arms of the family has the blazon of a silver shield charged with an erminois chevron cotised black between three ravens. The first recorded spelling of the family name is shown to be that of William Res. This was dated 1203, in the Pipe Rolls of Lincolnshire, during the reign of King John of England, 1199 – 1216. Throughout the centuries, surnames in every country have continued to “develop” often leading to astonishing variants of the original spelling.

My uncle Vincent Rice became my art patron when I was sixteen. I had given him a seascape I had done, that he had framed and proudly hung over his mantle. Later, he would save a painting I did when I was thirteen, and frame it. I worked at Vinnie’s warehouse one summer, and he gave me his car, the 1957 Ford Fairlane in the photo above.Vincent married Roy Reuben Rosamond’s oldest daughter, June. They had no children, and tried to make the Presco children their surrogate children, with little success. Vincent did his best to help us, he letting us live on the house on Glendon, for little, or, no rent. When he died, he left a good chunk of money to my siblings and I, and our cousin. I immediately made plans to acquire a scanner and new computer so I could publish historic letters and photographs on the internet.

Above are two photos that were on file at the University of Arkansas that I sent for. They appeared in the Otto Rayburn collection. Otto also was a good friend of my grandfather. Otto was a good friend of the artist, Thomas Hart Benton, the cousin of Garth Benton, who married Christine, Rosamond Presco, and born, Drew Benton. The Hand of Fate is at work here. Above are two letters from Rayburn that I will donate to the UofA. In 1998 I donated Rosamond’s ‘At Martha Healey’s Grave’ a small book I republished under my registered newspaper, Royal Rosamond Press Co.

The `Back to the Earth Movement’ was not invented by Hippie. In the 1930s many Americans were seeking a return to the Arcadian lifestyle
that was disappearing fast. My grandfather, Royal Rosamond, was at the vanguard of that movement, he leaving his beautiful wife and
four daughters to go live in the Ozarks where he was born where he would write four novels about the Billy Boys. He was good friends of
Otto Rayburn who bid him to find Californian poets who would contribute to his Magazine `Arcadian Life’.

The log cabin on the cover of this issue was built by Royal on his forty acres in Arkansas where he established a fishing retreat for
poets. Royal played the fiddle and collected quilts. He taught poetry in his attic studio in Oklahoma City where he died estranged
from his daughters. His wife, Mary Magdalene Rosamond, thought her husband quite the irresponsible Fool, and bid Royal not to come
home, she more capable then he of raising their children. One can say my grandfather dropped out of society. Five years ago I located
his unmarked grave and put a marker there. He was son of two roses, Rosamond, and Ida Louisiana Rose.

Lillian told me of the time she and her father went the dunes in Ventura where lived a colony of people in humble shacks. I am
wondering if this is not a splinter group of “The Dunites” that made a colony of Seekers in Oceana near San Louis Obispo. Royal called these people “his people” and visited them frequently. There was a Scotsman who played the fiddle for Lillian.

Professor Ernest Wood was a Theosophist working at the Theosophical Society in Madras, to whom Baba gave an explanation as to what he
meant by spirituality. Lillian said women from the Theosophical society befriended her mother Mary, and she thinks they contributed
to her independent nature.

It is important to understand we did not invent the core aspects of Hippiedom, so that we can establish a legitimate history that will
carry forth our best attributes. It is my plan to restructure the Family Creative Unity so it may last many lifetimes, and be enjoyed by all members of our family.

Otto Ernest Rayburn was a writer, magazine publisher, and collector of Arkansas and Ozark lore. Vance Randolph, in his introduction to Rayburn’s autobiography, Forty Years in the Ozarks (1957), defined Rayburn as a “dedicated regionalist” and added, “There is no denying that, in the period between 1925 and 1950, Rayburn did more to arouse popular interest in Ozark folklore than all of the professors put together.”

Otto Rayburn was born on May 6, 1891, in Hacklebarney settlement, Davis County, Iowa, to William Grant Rayburn, a farmer, and Sarah Jane Turpin Rayburn. The family soon moved to Woodson County, Kansas, where Rayburn grew up. In 1909–1910, he attended Marionville College in Marionville, Missouri. In the spring of 1917, Rayburn bought forty acres near Reeds Spring, Missouri. In June, he enlisted in the U.S. Army and served in France. He was discharged at Camp Funston, Kansas, in May 1919. For the next few years, he taught in Kansas and Arkansas schools.

In 1924, he became school superintendent for the Kingston Community Project of the Board of Missions of the Presbyterian Church. He regarded the six years he spent at Kingston (Madison County) as one of the most important epochs of his life. On September 26, 1925, Rayburn married Lutie Beatrice Day of Hopkins County, Texas, and brought her back to Kingston. They had two children. He was attracted to Kingston by its isolation, “a community that has a splendid highway in but no road out.”

In Kingston, he published his first magazine, Ozark Life: The Mirror of the Ozarks, beginning in June 1925, edited jointly with James T. (Ted) Richmond. The sixteen-page paper struck the tone that continued in virtually every periodical Rayburn ever undertook from then on, a tone that the late twentieth century calls boosterism or hype. Kingston is “Nature’s Beauty Shop,” and the King’s River valley is “one of the fairest dimples in the face of the smiling Ozarks.” He also wrote a column, “Ozark Folkways,” for the Sunday Arkansas Gazette for eight years beginning in 1927, as well as the column “Ozark News Nuggets” in the Sunday Tulsa Tribune.

“As throughout the South, nineteenth-century poetry in Arkansas was
largely in the Romantic Victorian vein. One early poet, Boston-born
Confederate general Albert Pike, wrote technically competent verses
from his vast knowledge of arcane mythology of Freemasonry. His
Prose Sketches and Poems, Written in the Western Country (1834)
preceded the obligatory “Letters from Arkansas,” published in the
American Monthly Magazine in 1836. The list of published poets until
well into the twentieth century runs heavily to Civil War veterans
and pious ladies, many of whom attended meetings of the Poets’
Roundtable, the Arkansas Writers’ Association, the Ozark Writers and
Artists Guild, and other groups. Their works were published
privately or in newspapers and popular magazines of the time, and
generally their reputations were local or regional. A few small
presses and newspaper publishers turned out books of verses, notably
the Bar D Press of Siloam Springs in the 1930s, which published
three members of the Davis family as well as other poets, and Otto
Rayburn’s various Ozarks publications.