Many Mansions Put Before Me

This morning I awoke from a very long dream. All these riches, jewels, deeds, companies were put on large table to be divvied up between my siblings and I. I saw how much my sisters got, and wondered why Vicki got more that me. She is the youngest. I saw genealogies, some written in German, or, a foreign language. There were fine estates and castles. I awoke and realized my sisters are dead. I did not see what Mark got. I concluded he is dead, and, found a way to leave several million to our kindred, everyone but me. The name Seinshiem popped in my head as I awoke. I know I am the Heir to the Seinsheim family fortune, a linage of Bohemians that allegedly died out in 1958.

After posting on my father and the Sea Wolf, this blog was attacked, nd was down for several hours. For six months the Rosamond Genealogy has been under attack by someone who says he owns the correct Wilson genealogy. He contacted my kidred and invited them to this site he set up, and told them all their connection to royalty – IS FALSE! He got one site manager to change her portion of the tree and has a grandmother marrying a grandmother. I suspect this sneaky fiend is related to the Swarsnberg Family, who stand to lose all their claims to fine estates and castles. On this day, February 12, 2020, I John Gregory Presco claim all property and titles owned by the Seinsheim family.

The dream I had last night was a Gift From God for my generosity to the poor and homeless. Give and thou shall receive…is the true Message of Jesus who descends from the Kings of Judah. Jesus refuses many estates, and goes homeless amongst the poor and disabled. He died – homeless.

I am a Nazarite after Samuel ‘The King Maker’. Samuel prophesied via his dreams. Did John the Nazarite have a dream about Jesus – before he knew he existed? How many times has a Nazarite Prophet dreamed, that he was…

THE KING OF KINGS?

I wear many crowns, this day! The point of my God-given Compass, has been placed on the grand map, and scheme of things. You can called me MAD, deluded, insane…..but that’s par for the course. Your slander are bread crumbs that led me out of the Dark Forest!

I found the people of the genealogy I could just make out the names of. I know I am destined for the church. All I want is a humble estate of the Schonborn family so I can continue my work and research with a circle of select scholars.

Dear Karel: Last night I had a long and powerful dream where all the deeds, titles, and genealogies of the House of Seinsheim-Schwarzenberg who put before me. I had DNA test that revealed we are related.

The House of Schönborn, especially its ruling prelates of the Roman Catholic Church, were among the most important builders of Southern German baroque architecture. While the private estates, at a large part still today owned by the family, were of more modest size, sometimes of elder origin, churches, monasteries, ecclesiastical residences and hospitals built by the Schönborn bishops were of immense grandness and splendor. Financing these was only possible with flourishing economies, which the Schönborn bishops did their best to uphold and enhance. Their famous court architect Balthasar Neumann was responsible for many of these buildings, others were Johann Dientzenhofer, Maximilian von Welsch and Johann Lukas von Hildebrandt. The family gave the name Schönbornzeit (Age of the Schönborns) to an era (1642–1756), sometimes nostalgically remembered in the popular conscience as an era of prosperity. Today, the term Schönbornzeit denotes a particular style of Rhenish and Franconian baroque.[2]

The ecclesiastical residences were owned by the church, and continued to be inhabited by successive bishops, while the private estates remained inheritance of the family. They were mostly acquired by the ruling prelates’ brothers. Of the grand bishops’ palaces, only Weissenstein Palace at Pommersfelden continues to be privately owned by the family, as it was built, from 1711, with an initial amount of 100.000 guilders which were personally granted to elector Lothar Franz by Charles VI, Holy Roman Emperor, in reward of his services and his continuous political support. It contains the largest private baroque art collection in Germany.

The Schönborn Palace (Czech: Schönbornský palác) in the Malá Strana district of Prague is the current home of the United States Embassy to the Czech Republic. The first United States Minister to Czechoslovakia was Richard Crane, the grandson of a Chicago plumbing millionaire. Crane, who had acquired the palace at the end of the First World War, sold the building in 1925 to the United States Government for $117,000.[1]

Here is my cousin Karel. The Lee-Leigh family are in his tree. Tyrants like Hitler and Stalin took away his kingdom and changed many names.

The House of Schwarzenberg and I
I a going to set up a site that might draw the young one in. If I knew WE were kin to Ben Toney, I would have introduced you. He spent 50 years on his family tree.
John Presco
Rosamond of Bayhall

Thanks for the info. It’s going to take me a few days to digest all this. The old brain isn’t a agile as it once was.

Just FYI, I’m forwarding my first cousin Ken Stedman your emails. Ken is the son of my father’s sister, Jewel Christine Rosamond. Hope this is OK with you. Ken and I are both 3rd cousins once removed to you.

Seinsheim is a municipality in the district of Kitzingen in Bavaria in Germany. It is best known for its connection with the comital Seinsheim family, which died out in 1958 with the exception of the princely House of Schwarzenberg branch of the family. 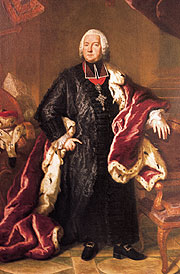 Adam Friedrich von Seinsheim supported the imperial side during the Seven Years’ War.[1] Troops from the Kingdom of Prussia invaded both bishoprics during the course of this war.[1]

My Library. My Castles. My Church. My Kingdom

Yesterday, I exchanged messages with a YOUNG man who is the grandson of Mikel Peters, the father I gave up my appartment for. The truth is, I was asked to move by Mikel’s good friend, Harry Basset. I did not have to move. Then Harry told me he just had a child, and the mother and child were homeless, too. They had moved from Florida all of a sudden. This YOUNG man gave me the names of the Mother and Son. I did consider the plight of Joseph, Mary, and Jesus. I did not have many belongings.

Tonight, is Halloween. Grimm named the Sleeping Beauty Princess ‘Rosamond’. What are the odds that I find a women named ‘Rosamond Clifford Dew’ after Fair Rosamond?

I have been attacked by real witches for five years – and longer! The curse has been lifted. A Royal Child, a ‘Rose of the World’ will be born. I am the Wizened Grandfather who saw into the future!

Here is my Rose Line to Rosamond Clifford:

Here is my Rose Line to Bohemian Royalty that are trying to get their castles back. A DNA test inked me this the Schwarzenbergs.

Dare I invoke the other name of Linda Comstock, who eagerly awaits the birth of Rosamond Clifford Dew?

Many a long year afterwards there came a King’s son into that country, and heard an old man tell how there should be a castle standing behind the hedge of thorns, and that there a beautiful enchanted Princess named Rosamond had slept for a hundred years, and with her the King and Queen, and the whole court. The old man had been told by his grandfather that many Kings’ sons had sought to pass the thorn-hedge, but had been caught and pierced by the thorns, and had died a miserable death. Then said the young man, “Nevertheless, I do not fear to try; I shall win through and see the lovely Rosamond.” The good old man tried to dissuade him, but he would not listen to his words.’

Here is what they are hiding! I informed Jimmy Rosamond of my discovery and he asked me if he could share it with his cousin. I gave him permission. I should have kept this to myself.

Household of Count Erkinger I Baron Of Schwarzenberg Erasmus

He had a relationship with Mrs. Erasmus

HERE IS WHERE HER LNE WAS SNIPPED.

Husband:   Michael, I of Seinsheim

1 Response to Many Mansions Put Before Me