This is pure prophecy!

Britain is a very ancient place. Roman officials lived there. Emperor Constantine was born there. Choices were made. The Brit’s chose The English Language. The King James Bible was printed. Herbert Armstrong understood the importance of the English Speaking People – and our history! There is a Diplomatic Language that Thomas Wilson helped develop with the help of Shakespeare.  Donald Trump is……..The Corrupter!

Here is the resting place of Rena Easton’s husband who was given a poet’s burial.

The Most Honourable Order of the Bath (formerly the Most Honourable Military Order of the Bath)[1] is a British order of chivalry founded by George I on 18 May 1725.[2] The name derives from the elaborate medieval ceremony for creating a knight, which involved bathing (as a symbol of purification) as one of its elements. The knights so created were known as “Knights of the Bath”.[3] George I “erected the Knights of the Bath into a regular Military Order”.[4] He did not (as is commonly believed) revive the Order of the Bath,[5] since it had never previously existed as an Order, in the sense of a body of knights who were governed by a set of statutes and whose numbers were replenished when vacancies occurred.[6][7]

The Order consists of the Sovereign (currently Queen Elizabeth II), the Great Master (currently The Prince of Wales),[8] and three Classes of members:[9]

Members belong to either the Civil or the Military Division.[10] Prior to 1815, the order had only a single class, Knight Companion (KB), which no longer exists.[11] Recipients of the Order are now usually senior military officers or senior civil servants.[12][13] Commonwealth citizens not subjects of the Queen and foreigners may be made Honorary Members.[14]

The church is medieval.[1][2] is one of the oldest churches on the Isle of Wight, and was listed in the Domesday survey of 1086.[3][4][5] Mark Whatson is the pastor of All Saints, which is an Anglican church[6] in the Anglican Diocese of Portsmouth. A primary school associated with the church is nearby.[7]

There is a marble memorial commemorating Alfred Tennyson, 1st Baron Tennyson in All Saints Church. His wife Emily Tennyson, Baroness Tennyson, son Hallam Tennyson, 2nd Baron Tennyson and other family members are buried in the church cemetery. The church is also the site of a memorial to Tennyson’s son, Lionel Tennyson, who died of malaria in 1886. Inside the Church there are memorial plaques to members of the Crozier Family who resided nearby. Lady Mary Martin is also remembered on a plague her maiden name being Crozier. Admirial Crozier is buried near to Lord Tennyson in a large Table Tomb. The wynch Gate was built compete with roof in memory of The Crozier Family.

All Saints’ Church, Freshwater is a parish church in the Church of England located in Freshwater, Isle of Wight

Alfred Tennyson, 1st Baron Tennyson, FRS (6 August 1809 – 6 October 1892) was Poet Laureate of Great Britain and Ireland during much of Queen Victoria‘s reign and remains one of the most popular British poets.[2]

Tennyson excelled at penning short lyrics, such as “Break, Break, Break“, “The Charge of the Light Brigade“, “Tears, Idle Tears” and “Crossing the Bar“. Much of his verse was based on classical mythological themes, such as Ulysses, although In Memoriam A.H.H. was written to commemorate his friend Arthur Hallam, a fellow poet and student at Trinity College, Cambridge, after he died of a stroke aged just 22.[3] Tennyson also wrote some notable blank verse including Idylls of the King, “Ulysses“, and “Tithonus“. During his career, Tennyson attempted drama, but his plays enjoyed little success. A number of phrases from Tennyson’s work have become commonplaces of the English language, including “Nature, red in tooth and claw” (In Memoriam A.H.H.), “‘Tis better to have loved and lost / Than never to have loved at all”, “Theirs not to reason why, / Theirs but to do and die”, “My strength is as the strength of ten, / Because my heart is pure”, “To strive, to seek, to find, and not to yield”, “Knowledge comes, but Wisdom lingers”, and “The old order changeth, yielding place to new”. He is the ninth most frequently quoted writer in The Oxford Dictionary of Quotations.[4] 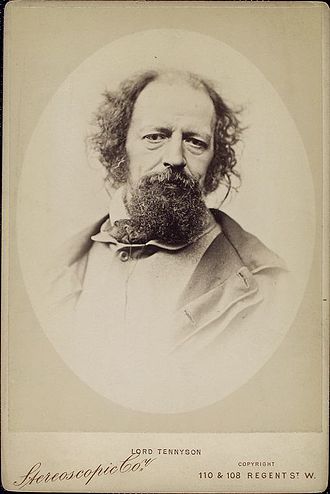 After William Wordsworth’s death in 1850, and Samuel Rogers‘ refusal, Tennyson was appointed to the position of Poet Laureate; Elizabeth Barrett Browning and Leigh Hunt had also been considered.[15] He held the position until his own death in 1892, by far the longest tenure of any laureate before or since. Tennyson fulfilled the requirements of this position by turning out appropriate but often uninspired verse, such as a poem of greeting to Princess Alexandra of Denmark when she arrived in Britain to marry the future King Edward VII. In 1855, Tennyson produced one of his best-known works, “The Charge of the Light Brigade“, a dramatic tribute to the British cavalrymen involved in an ill-advised charge on 25 October 1854, during the Crimean War. Other esteemed works written in the post of Poet Laureate include Ode on the Death of the Duke of Wellington and Ode Sung at the Opening of the International Exhibition.

Did Thomas Wilson inspire Shakespeare? I suspect the clergy were steeped in the art of rhetoric that was taught and practiced at court. They might have put on plays as learning tools. Thomas Wilson would be wanting his sons and grandsons to master rhetoric. Rev, John Wilson may have been using rhetoric in his sermons, which put him at loggerheads with the Quakers who were preaching in Plain English. This would explain why the Wilson family was installed at Windsor and Buckingham palace. They represented the English Renaissance, that was the enemy of the Catholic Habsburgs and Mary Queen f Scots who drove the English Renaissance into exile where they came in contact with radical ideas.

The Duchess of Suffolk was close to Thomas Wilson, and the De Vere family who had an acting troupe. It has been suggested De Vere wrote Shakespeare’s plays. But I suspect he was the façade, the front man, who owned a stage, a forum for the radicals who now took over Parliament. How many children of the gentry attended these plays, they able to follow the lesson, while the undedicated were delighted with the spectacle. The Oxford Men added a bawdiness for the masses. I suspect Erasmus Webb played a role? That so little is known about Shakespeare’s life, indicates there were folks in high places behind the curtain as William took his bows. If some of them were heads of the Church and members of Parliaments, you would not want this known. It was dangerous. Many people ended up in a dungeon. This was a Masked Ball. This is a – School!

Thomas Deloney was a Literary Anarchist who realized Royals can be toppled with clever words. The wrong people have had their scholarly right-wing way with The Bard of the Royal Soap Opera. Of course they do not want to see the right people are in power – for a change! One only need look at the Dumbing Down of America by the Trumpsterites and his Hew-Haw Boys. Watching Senator Lindsey Graham kiss ass on the most rancid political stage ever created, spells the end of the Enlightenment that Founded this Democracy. The evangelical leaders are the new Habsburg Catholic church, full of self-righteous prigs that bow down to a clown, a buffoon and pussy-grabber.

“Off with her head!”

I am surrounded by ignorant Grunt Women of the Lethal End Time Evangelical Gossip Circle who hate men who own knowledge and show good breeding. These holy ones are fueled by the Pixilated Dixie Trash Talking that is broadcast by the corrupted actors at Fox News, who got the President in their back pocket. Putin is keen on learning from them.