The Rose of Wallace

Tonight, on Saint Patty’s Day, I called up my friend Ed Corbin, and told him we are related. I read him a part of Bind Harry’s poem;

“Nor will I here his mother’s kindred hide: She was a lady most complete and bright, The daughter of that honorable knight, Sir Ranald Crawford, high sheriff of Ayr, Who fondly doted on his charming fair. Soon wedded was the lovely blooming she, To Malcolm Wallace then of Ellerslie; Which am’rous pair, transported with delight, Begot young Malcolm that same joyful night. …”

“What is the source of your middle name, Malcom?” I asked my old friend.

“I believe you just read it.”

Edward Malcom Corbin had told me he descends from William Wallace on his mother’s side.  He has treated me like family since we met in 1997. He encouraged his three sons to treat me as family – and their wives! Ed has five grandchildren who are in my family rosy tree. That a rose can be attached to Wallace, via the marriage of my great grandfather, Robert Rose to Johanna Crawford, is a profound addition to the legends of the Scot-Irish.

The Crawfords lived in Loudoun Castle that burned down in 1941 while it was being used as a training ground for Belgium Commandos who were attached to Secret Air Services that is associated with my kin, Ian Flemming. Last night I watched ‘In Her Majesties Secret Service for the first time. This is the real deal. I am going to design a cote of arms for this Rose-Crawford linage.

Two day ago, I found a song about Crawford’s Defeat. I am still trying to find the link. I did find Captain Ezekiel Rose, who is mentioned in this song.

I feel my grandfather, Royal Rosamond, has been reaching out to me since I was born. We never met. He wanted to get his history to me. Together, we have raised our family from the ashes of despair. Side by side, we march our destiny into………legend! 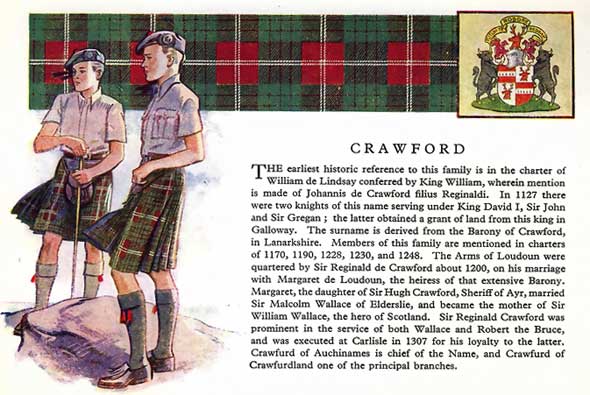 In Blind Harry’s poem she is described:

“Nor will I here his mother’s kindred hide: She was a lady most complete and bright, The daughter of that honorable knight, Sir Ranald Crawford, high sheriff of Ayr, Who fondly doted on his charming fair. Soon wedded was the lovely blooming she, To Malcolm Wallace then of Ellerslie; Which am’rous pair, transported with delight, Begot young Malcolm that same joyful night. …”

Hugh de Craufurd (1221) of Loudoun, and left issue Margaret, who married Sir Malcolm Wallace of Ellersley, and was mother of the immortal patriot Sir William Wallace.

Blind Harry claimed his work was based on a book by Father John Blair, Wallace’s boyhood friend and personal chaplain. This book has not been seen in modern times and may never have existed; the poet’s attribution of his story to a written text may have been a literary device; many contemporary critics believe that Acts and Deeds is based on oral history and the national traditions of Blind Harry’s homeland.

Most historians nowadays regard Acts and Deeds as a versified historical novel, written at a time of strong anti-English sentiment in Scotland. At twelve volumes, the work is also doubted to be solely his work. Elspeth King maintained that despite any inaccuracies, Harry’s patriotic and nationalistic portrayal was to ensure Wallace’s continuing reputation as a hero. Robert Burns acknowledged his debt to Harry, paraphrasing the following lines from Harry’s Wallace in his own poem Robert Bruce’s Address to his Army at Bannockburn (Scots, wha hae wi’ Wallace bled):

which Burns described as “a couplet worthy of Homer“.

Clan Crawford is a lowland Scottish clan of Scandinavian and Anglo-English origin.[1][2] Since the early 18th century an erroneous belief was held by some historians that the clan had Norman origins, but this belief has been shown to be false and based on spurious comparisons of the arms of Crawford with those of the Earl of Richmond. While historically recognised as a clan by the Court of the Lord Lyon, it is now an armigerous clan as it no longer has a chief. The last chief was Hugh Ronald George Craufurd, who sold his land (Auchenames, Crosbie and other estates) and moved to Canada in 1904. He died in Calgary in 1942, leaving no male heirs.[2]

The surname of Crawford comes from the barony of Crawford, adopted around 1125 when Norman knights who came with King David I when he returned to Scotland to assume the throne and instituted Norman feudalism.[2] The name is taken from the barony of the same name in Lanarkshire.[2] The early names of all of the principal Crawford families are all Norman, however some scholars have asserted an Anglo-Danish ancestry.[2] There is a tradition that Reginald, who was a son of the Earl of Richmond was one of the Norman knights who were established by David I of Scotland.[2] The Crawfords appear in a legendary incident when the king’s life was saved from a stag and this led to the foundation of Holyrood Abbey.[2] It is said that Sir Gregan Crawford was instrumental in saving his royal master’s life.[2]

Sir Reginald Crawford was appointed sheriff of Ayr in 1296.[2] His sister married Wallace of Elderslie and was mother of the Scottish patriot William Wallace.[2] (If going by the traditional origin of William Wallace as son of Malcolm Wallace of Elderslie). The Crawfords rallied to their Wallace cousin during the Wars of Scottish Independence.[2] The family of the Crawford sheriff of Ayr produced the main branches of the clan: the Crawfords of Auchinames and the Crawfords of Craufurdland.[2] The chiefly line is reckoned to be that of Auchinames in Renfrewshire who received a grant for their lands from Robert the Bruce in 1320.[2]

Sir William Crawford was knighted by James I of Scotland and fought with the Scots forces in the service of Charles VII of France.[2] In 1423 he was wounded at the siege of Creyult in Burgundy.[2] John of the Craufurdland branch of the clan was killed at the Battle of Flodden in 1513, as were the Lairds of Auchinames.[2] A generation later the Laird of Auchinames was killed at the Battle of Pinkie Cleugh in 1547.[2] Thomas Crawford of Jordanhill also fought at the Battle of Pinkie but was captured and later ransomed.[2] In 1569 he became a member of the household of Henry Stuart, Lord Darnley when Darnley married Mary, Queen of Scots.[2] Crawford denounced both Maitland of Letherington and Sir James Balfour as being conspirators in the murder of Darnley, however he did not sympathise with the deposed queen and in 1570 actually captured Dumbarton Castle from her forces with just one hundred and fifty men.[2]

In the seventeenth century Craufurdland Castle was much extended by the sixteenth Laird.[2]

John Walkinshaw Crawford, the twentieth Laird was a distinguished soldier who joined the army at an early age and rose to the rank of Lieutenant-Colonel.[2] He fought in the victory at the Battle of Dettingen in 1743 against the French.[2] Two years later he also distinguished himself at the Battle of Fontenoy.[2] However despite his faithful service to the house of Hanover, during the Jacobite rising of 1745, he was also a faithful friend of the Jacobite Earl of Kilmarnock (chief of Clan Boyd).[2] In a last act of comradeship he followed Kilmarnock to the scaffold where he received the earl’s severed head and attended to the solemnities of his funeral.[2] As a result his name was placed at the bottom of the army list, although he was restored in 1761 and appointed falconer to the king.[2] He died in 1793 and left his entire estates to Sir Thomas Coutts.[2] However this was contested by Elizabeth Craufurd, who eventually won her case in the House of Lords in 1806.[2] This branch of the clan united the families of Houison and Craufurd and they still live at Craufurdland.[2]

Sir Alexander Craufurd of Kilbirnie was created baronet in 1781 and his son, Robert Craufurd, commanded the Light Division in the Peninsular War.[2] He died in 1812 leading his troops in an assault on the fortress of Ciudad Rodrigo.[2] A monument was erected to him in St Paul’s Cathedral, London.[2] Hugh Crawford, the twenty-first Laird of Auchinames, emigrated to Canada having sold the ancient clan lands in the early twentieth century.[2]

Castles that have been owned by the Clan Crawford include amongst many others: 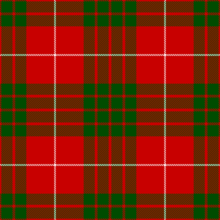 The modern crest badge of a member of Clan Crawford contains the crest: a stag’s head erased Gules, between the attires a cross crosslet fitchée Sable.[4] Encircling the crest on the crest badge is a strap and buckle engraved with the motto: TUTUM TE ROBORE REDDAM which translates from Latin as “I will give you safety through strength”.[1] The Crawford tartan is of relatively modern origin, and it is certain that there was no Crawford tartan in around 1739. The first record of a Crawford tartan is that of the “Crawfovrd” which appeared in the Vestiarium Scoticum of 1842. This is the Crawford tartan used today. The Vestiarium was the work of the Sobieski Stuarts whose influential book purported to be a reproduction of an ancient manuscript about clan tartans. Today many clan tartans are derived from the Vestiarium.[5]

John Craufurd of Craufurdland died in 1612, aged only 21, from an injury received at football. His widow married Sir David Barclay of Ladyland in the Parish of Kilbirnie, Ayrshire.[6]

1 Response to The Rose of Wallace