Shamus Dundon Is A Lying Cheat 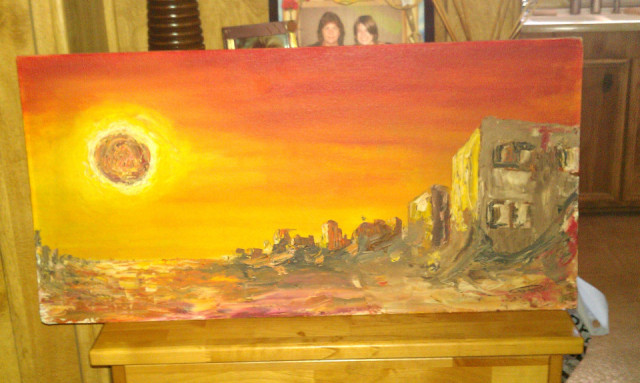 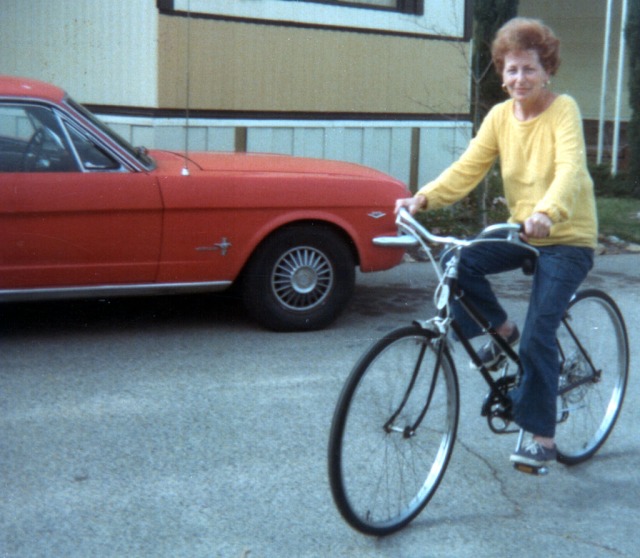 In doing a simple genealogy a few vital statistics are required. The date of birth, the date of death, and how old the family member was is given. Birth place, and place of death, is required. After I gave my sixty page report to the Sherriff and Coroner of Monterey County, he changed his report. Shamu’s mother told the Coroner’s office at the hospital they took Christine, that they were “hikers on highway one”. The Coroner did not know they were guests in a home at Rocky Point. When I asked Vicki for the names of the owners, and when she refused to give me their names, my investigation was on. I still do not know who invited the world famous artist, Christine Rosamond Benton, to that very dangerous place. What I wanted to ask them, was this;

“Did you tell my sister this was not the place to go “shelling” and looking for creatures in tide-pools? Did you tell my family to not go down to the sea?”

As a family member, I had the right to ask these questions. But, what if I was no longer a family member, or, just treated like an outsider? There’s another family member I was not told was on death’s door, Melba Broderick. Her son told me he told Vicki to tell all her grandchildren she wanted to see them before she died. He was shocked to learn she had not told us, and thus Melba left her estate to her only son, with express wishes that he invest it in Rosamond’s art, in order to increase grandma’s legacy.

“My mother was very upset when no one showed up. So was I.”

I kept my mouth shut, because I was investigating the death of a family member. This sad sea yarn made no sense. Why would Melba want to increase the legacy meant for unforgiving monsters? I went to the County seat and looked at Melba’s Will. I read the words DISOWNED. Her will had been changed days before she died. This is when I stopped seeing The Big Liar. It was too much. This poor woman was deprived of what tens of millions of old people have enjoyed for a million years – the right to meet your maker after making peace with all members of your family. Melba Broderick died an abandoned orphan in the world. Why didn’t Shamus Dundon call Mark? When Mark called me to tell me Vic raped our niece, Shannon, he asked me what became of Melba’s legacy. He had talked to Christine and she said;

I understood Mark was trying to get me mad at our sister. He said Christine was blackmailing Vic – for money! It took me a month to figure out that the plan was not have anyone show up at Melba’s bedside, and she leave it all to Vic, who was waiting for his mother to die to he could become a partner of his two daughters in four Rosamond images. I talked to Melba’s Executor who lived across the street, that I knew as a child, and he said;

“Your father was in a awful hurry to get the Probate 0ver so he could invest in your sister’s art.”

Did Mark know about this conspiracy the defraud? Did my brother know about the $60,000 dollars Vicki invested in Christine’s art. Did Mark know our sister stole this money from her husband’s bank account, and, joined the Navy in order to get away from crazy Ken Prather, who threated to murder our sister? You could have read about Ken if Shamus had contributed to Tom Snyder lying biography of Christine. I asked Mark why he didn’t contribute to our sisters’ biography. He said;

“I couldn’t think of anything nice to say about her.”

Then Mark let it slip he read the rough draft of this bio. Do you see him…The Man of the Presco Family lurking in the background – controlling the information? I am convinced Shamus got permission from Mark, and Viki, to keep me, and the adult Heir, in the dark.

Vicki ended up with Melba’s Rambler. Her only son ended up with my mother’s Mustang. When Shamus was forced to call me because his son reads this blog, he asked me what I wanted. I told him I want my painting, Rosemary’s jewelry box, and my sisters autobiography that his mother showed me a month after Christine was “killed” by a rogue rave. Shamus told me my nieces are fighting over the jewelry box, and, if he finds the lost bio he will give it to Drew Benton.

“Yes! I want the truth. Who was invited to the party at Rocky Point?”

“What party! There was no party!”

“You haven’t read the bio?”

On this day, Mark Presco and Shamus Dundon, are suspects in the MURDER of my sister. Since 1994 I have been looking at someone knocking Christine out, then dragging, or carrying her to the edge of the cliff. She survived the plummet, and was revived by the cold sea.

My family is the coldest and most inhumane family – in art history – if not human history! I was smart to get away from them, and stay away most of my life. I should not have gone to Christine’s funeral. Rosemary told me Christine did a Virginia Wolfe, and walked into the sea. It is so very hard to look at the possibility your mother is lying to you, giving you a alibi, just in case you are wondering, guessing at what the truth is……..again! Rosemary knew I owned a detective mind. She knew……….I loved the truth! She helped with the cover-up. She helped…….un-born me.

Rosamond’s Estate was sold to Stacey Pierrot, The Liar, who removes herself from the Death Scene by saying she flew to visit her parents, and did not get back until the “afternoon”. This is March. How cold is it? What time does the sun set? Why didn’t Stacey delay her visit – till after the party? Christine does not do things half way. Who was in charge of the invitations? Jacci was taking care of the gallery.

Vicki told me Christine invite her to come sign more of her prints. Rosamond was too lazy to do this. Vicki told me she resented being used as a servant. Vicki told me the main house was locked. The Sheriff told me it was open, and full of people, even children. Vicki told me she, Drew, and Shamus salivated while looking at the T.V. They wanted to play video games. When Shamus told me he was up in the house playing video games, and not down in the cove where his aunt was swept away, the Cavalcade of Lies, was on. When did it ever stop? I can’t even do a simple genealogy.

I tried to see members of my family once a year. I saw my father a year before the fist member of my natal family, died. I met my cousin, Bill Broderick, for the first time. He introduced me to his other. Then I learned he and Vic were sending Chritine and Garth legal letters. Bill was an attorney. Christine never gave her partners proceeds and an accounting. Vicki was furious, but, had been seeing Garth during the divorce. Vic and Bill said she jumped ship, and was trying to get her investment back through Garth. She failed. She and Shamus took a shit load of partnership prints out of my sister’s house – the very day she died – and stuffed them in the trunk of grandma’s Rambler! These two are not artists, not talented.

When I visited Christine one year, she took me to the top of a hill in her brand new Cadillac, and offered to teach me her style so I could become rich and famous, too. She gave me full credit for her success – as her teacher! I told her she did not owe me a thing, and she deserved her success.

“You have done an amazing job!”

When I tried to make amends, and called for a family reunion in Bullhead City where I met my grand nephews, Robert Miles called me and told me he was moving out of the last place I saw Rosemary alive. He wanted to know if I wanted my painting my mother put out in the shed, where it got wet, and warped. The frame was ruined. I told Robby to take the work out of the frame, and ship it to Vicki, which he did. I told Vicki to put it between her mattress to get the warp out, then, get it framed. This is where Shamus found it – eight years later!

Why did my mother put my work out in the shed? In Snyder’s bio, there is a mention of a letter Christine got from me. It was about forty pages long. It is lost. Vicki, Mark, and Rosemary got a copy. I tell my siblings WE are throw-away children, and should get our children back, that we threw away. I did not know I was a father. I considered my siblings children, my children. I talked about my sobriety, and the Co-Dependency programs I was in. I said this;

“God help us if one of us dies. We are so dysfunctional, this tragedy will destroy us.”

Shamus said as soon as he sends me my painting, he is done with me. I gave that painting to Vicki as an Act of Good Faith. Could she feel it’s warmth as she lay atop it?

I never realized a dime from my sister’s art. I didn’t want – one dime! I was proud of her. As her teacher, I was rewarded. Rosemary died believing my sister got all her talent from her. Vic died with the same belief. The truth is, Rosamond got her talent from me…..The Boy Who Got Thrown Away!

The last time I saw Rosemary, alive, she woke me in the middle of the night. She was rummaging through the house looking for the original work of art her daughter gave her.

“When was the last time Vicki was here?”

“Two months ago. We talked about how much she thought it was worth!”

“There you go! Now you know where it went! Now do believe me?”

What mother wants to own the truth her daughter is a dishonorable, lying, thief! And still I tried to make it all better!

Sucker! Like mother, like son. Shamus called me to let me know he will be carrying on Vicki’s family tradition.

You got to laugh! I hope my reader and audience is amused!

“You see. Captain Vic raised us to be like pirates. Stealing treasure that does not belong to us – is a art!” 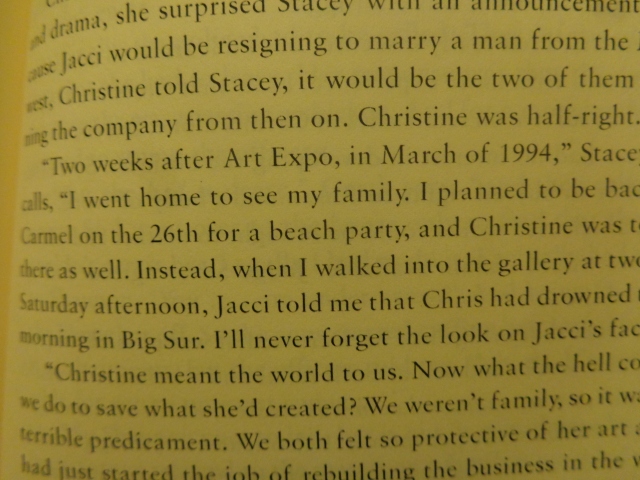 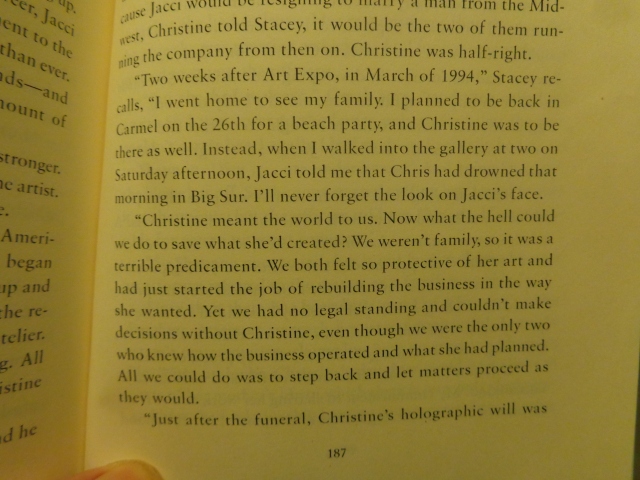 Alas I read all of Tom Snyder’s shitty biography of my later sister Christine Rosamond. Stacey Pierrot sais there was a party going on. This is what my mother said. She also suggested her daughter committed suicide. From what Snyder wrote, I tend to agree.

Stacey says her and Jacci Belford were “protective of her art”. Stacey lied to me when she said she was not selling Vic’s share of the prints purchased with Grandma Melba’s legacy. I had Vic call Garth’s divorce attorney who Vicki was talking to almost every day.

“I’m shocked to know you exist – and the partnership prints! I told Garth and Vicki to inventory the entire estate,”

My father died without getting his share of the prints. This is why I got angry with my daughter’s idea she too is a immaculate conception. Thrice she failed to tell me I was going to be a grandfather. I was not told I was a father.