Early this morning I went to Ancestry.com and found two messages from my cousins. I was thanked for my amazing study of our DNA material. Studying one Family Tree is the biggest hobby in the world. Studying my natal family is a journey into Hades. I suspect I am the only one left in my natal family. I suspect Mark Presco wanted his pending death kept a secret, lest I, the designated ‘Family Scapegoat and Parasite’ go after his million dollars. This idea has entertained my brother since I was born! We are a year apart. Mark abandoned us when he was sixteen. Victor Presco left his family when I was eleven, and was not allowed any visitation rights. He never paid child support. He told aunt Lillian I was not his child, but the son of a man Rosemary lay down with, and cheated on Mr. Germany Loyalty Man. Things were going badly for Victor. It looked like he was a Born Failure. Being a authentic neo-Nazi, he needed a scapegoat.

Vic Presco put Mark and I to work when we were eight and seven. We drove around in his old Plymouth looking for bald tires. He is raging at me. I kept missing tire with little thread. When we spotted one, Vic took down the license plate number of the car, and had his best, Skip Sutter, of the Oakland Police number run the plates and get an address. Vic would mail out these cards. He thought he was a genius for coming up with this angle on success. Of course when men who served their country got a card, they felt spied upon.

“How in the fuck did he get our name?”

Vic felt this Personal Touch would make him the top Goodrich Tire Man of the Year. There had to be someone who put the jinx on King Victor. I was sent to live with grandmother Mary Magdalene Rosamond. I was sent away from the Victorian house of Stuttmeister. Mary enrolled me in the second grade. It looked like I was going to be in L.A. for awhile.

When I came home, Rosemary told me her husband went on a Work Strike, and, all four Presco Children were sent away to live with relatives. This was a lie. Mark was sent to grandma Melba’s for a week, but came home. Vic wanted to see how his life and luck would be changed, if he just owned the girls.

Vicki knew the other man’s egg in Vic’s nest story, and how unfair it was that Daddy had to raise the Parasite as his own. Christine didn’t get the lowdown on the great Presco Family Secret – until after she was a world famous artist – who got all her talent from Vic, and his superior German Genetics. Vic told Mark the truth when we were young. This is why he made rejecting me – his artform! Here is Mark Presco on “Race” and “Women”

I have been ‘The Man of the Family’ since I was thirteen. But, because of the dysfunctional and criminal nature of my parents, and the mental illness of Mark, I could not be this. It was a threat to everyone’s identity, especially my own. Our children can not handle it – or any of our history. Below is a map showing my ethnicity. I will begin to delve into it, and tell our story.

I doubt Cian, Shannon, Heather, Drew, and Shamus read Christine’s biography. I know Shamus Dunson has read some of this blog, because he told me his was angry about the things I wrote about his mother, Vicki Presco – who he wasn’t going to tell me – was dead! Vicki and Mark were communicating. Then there is my daughter, Heather Hanson, who is un-borning me in her narcissistic way. Cian Presco disowned his father and took the surname of his step-father, O’Brian. Shamus asked what I wanted that his mother had owned, and I asked for the painting you see above. I never got it. I painted this when I was fifteen. It is the house on Midvale.

This is not a happy, healthy, or sane family that got rooted at 3106 13th. Avenue in Oakland California. Gertrude Stein lived right down the street. William Byer, Rudolph Stuttmeister, and his son William, built houses in Fruit Vale a city that became a part of Oakland. Oscar Presco and his son were contractors who lived in Marin and San Anslemo. Don Presco built a sailboat and raced in San Francisco Bay.

I give my cousins permission to use all our history. This is just the begging of this post that needs to be double-checked. There is more to come. I am going to post on next on Windsor Castle where two of my grandfathers lived. Prince Andrew is blowing up the Royal Windsors with his lies and criminal activity with Epstein. There is another Prince Andrew. He is more closely related to Tsar Nicholas. Princess Diana’s sons are kin to the Romanov Tsar that Putin and Natalia want to see the Monarchy restored around.

We are all raised up with the Wilson bloodline that is the green area. Holland is included, as well as is Toxandria. This suggests the Rosamonds descend fro the Rosemondt family of Holland whose progenitor came from Sweden, are Demark. Vic does not have an of these genes – that beat Nazi Germany. Mark has the United Kingdom, but his Broderick DNA overwhelmed him. I do not look like Vic and my siblings. I felt superior to all those Germans in our family – and they knew it! I walked on eggshells. I retreated into Art and Poetry where they could not follow. Rosemary said many times…

“Christine followed in your footsteps!”

I looked like Royal Rosamond, who Vic and his children, never met, in person.

May Ellen Presco Passed away December 25th, 2006. She was preceded in death by her beloved husband and best friend Donald E. Presco. She is survived by her four children Donn Presco of Burney, Debbie (Russ) Nelson and Diane (Bill) Simkins all of Redding and Donna (Loyd) Wilbur of Vermont. She will be deeply missed by her four grandchildren, Brad Silvers, Jennifer Buchnoff and Erin Callanan and Colleen Callanan and one great granddaughter. Born in San Francisco on December 31, 1923 May grew up in Los Angeles and the Bay Area. While living in San Francisco, she met her future husband Don Presco. After they married they honeymooned on the sailboat which they built together and on which they enjoyed racing on SF Bay. They built their home in San Rafael where they raised their four children. May enjoyed golf and was a member of the Meadow Club and later Discovery Bay Country Club and Yacht Club. She also enjoyed her bridge club for many years. After the death of her husband, she moved to Redding to be close to her children. 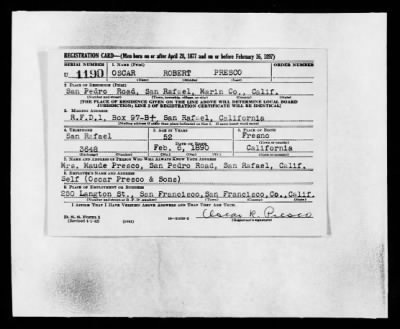 William Broderick married Alice Stuttmeister, the daughter of  William Stuttmeister and Augusta Janke, and lived on 13th. Avenue and 31st. St. in the large Victorian seen above. The Prescos moved there in 1953 and lived in the top half of this beautiful house. I am going to take you on a tour of the Oakland the four Presco children had come to dearly love. Leaving here was a tragedy we never recovered from. These is a light, a bubble around our neighborhoods.

Children of Alice Stuttmeister and William Broderick are: