Give Us The Black Barabbas! 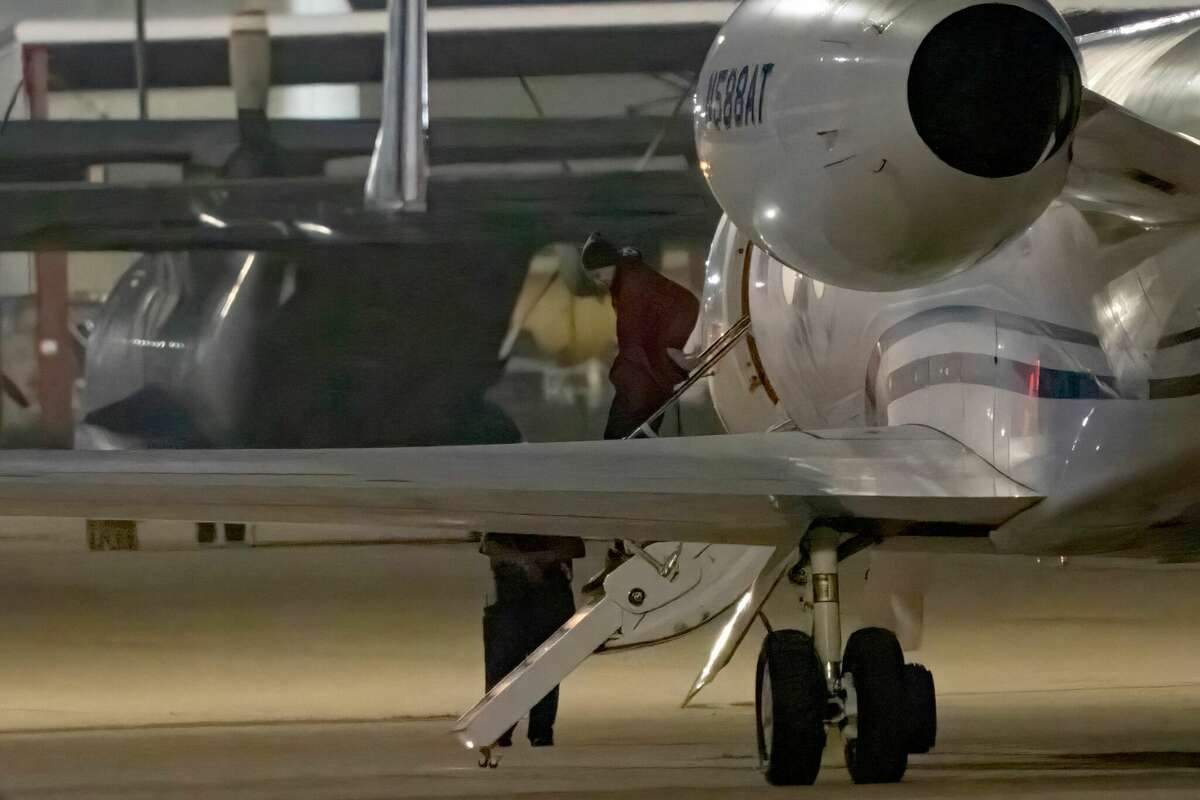 American basketball star Brittney Griner gets out of a plane after landing at the JBSA-Kelly Field Annex runway on December 9, 2022 in San Antonio, after she was released from a Russian prison in exchange for a notorious arms dealer.

Give Us The Black Barabbas!

No sooner was Brittny y on the plane, then Tik Tok and Facebook was filled with Righteous Indignation from men and women who want to be seen as patriots. The patriotic white women, want to be seen as loyal Christians, and thus they end each sour message with a PRAYER FOR, Whelan. These Betsey Ross White Women made it clear – that their prayers work! The proof of their potency – Biden STOLE the election from their almost Divine Candidate – who is coming to Reclaim the White House. Any day now. Don’t give up – THE FAITH!

What they have created is a Cargo Cult, that I will compare to Nike and Phil Knight, who backed two women for the office of the Governor of Oregon. What if – Christine Drazen won? – is a question I get to ask! How many people who voted for her believe the FREEING of Griner – was a National Disgrace?

Christians turned Griner into their Holy Litmus Test. If you do not come out against her – then you are ONE OF THEM! You are one with the Jews – who voted to free Barabbas – whose first name was JESUS! Did you know that? Barabbas means “son of the father”. Hmmmm!

We are coming upon the Birth of Jesus in fifteen days. Christmas is the Mother of Cargo Cults. I walked out of Mel Gibson’s ‘The Passion of Christ’ when he depicted Barabbas as a decadent Liberal , Sex Maniac. This was over the top ANTISEMITISM – that will be celebrated this month – because Jesus was BORN TO DIE for our sins! In this light – the Jews made the RITGHT CHOICE! Christians have been notoriously anti-Semitic, Professional Black Basketball Players scrutinized/

Since I Googled Nike and Kyrie Irving, my newsfeed is overflowing with NIKE NEWS! It’s like I tapped into another reality – that President Putin has tapped into – AS A TRADER IN BLACK ATHLETES! Did he know THEIR TRUE VALUE – before Brittney got on a plane to play? Has Putin studied Phil Knight?

No one playing Holy Betsy Ross – condemned Putin. This fits as millions of Christians can be seen as ‘Putin Lovers’. When I was fed a photo of the altered tennis shoe Kyrie wore in a game, I understood this was a work of Religious Art. In a way this is the Black Pieta – if the real Jesus had led a rebellion against Rome, and was very critical of Jews who counted themselves – FRIENDS OF THE ROMANS! How many Jews in the world consider themselves ‘Friends of Putin’? Is Griner a friend of Putin?

Study the photo above. Million of voting Christians are playing an End Game, where Jesus lands in a jet, and lets those he CAME FOR, know – their bad luck has changed! Everything will now work for them. Did Brittney own a clue she would be arrested – and DRAFTED into the Holy American Culture War? How many times did Brittney play basketball in Russia? Was she being….stalked….because she was Gay and Married? Congress passed the Gay Marriage Bill yesterday.

Russian President Vladimir Putin crosses himself during the Easter service at Christ the Savior Cathedral in Moscow on May 2.Sergei Guneyev / Sputnik; Kremlin Pool Photo via AP

While the world looks on in horror as Russia’s invasion of Ukraine unfolds, one group has been praising Russian President Vladimir Putin. It turns out Putin has a fan base in America’s right-leaning evangelical politicians and pundits.

Putin has a fan base in America’s right-leaning evangelical politicians and pundits.

At this year’s Conservative Political Action Conference, which wrapped up over the weekend, Lauren Witzke, a GOP candidate for the Senate in Delaware, said: “Here’s the deal. Russia is a Christian nationalist nation. They’re actually Russian Orthodox. … I identify more with Putin’s Christian values than I do with Joe Biden.”

According to all four canonical gospels there was a prevailing Passover custom in Jerusalem that allowed Pilate, the praefectus or governor of Judea, to commute (reduce) one prisoner’s death sentence by popular acclaim. In one such instance, the “crowd” (ochlos), “the Jews” and “the multitude” in some sources, are offered the choice to have either Barabbas or Jesus released from Roman custody. According to the Synoptic Gospels of Matthew,[3]Mark,[Mark 15:6–15] and Luke,[Luke 23:13–25] and the account in John,[John 18:38–19:16] the crowd chooses Barabbas to be released and Jesus of Nazareth to be crucified.[Mark 15:6-15] Pilate reluctantly yields to the insistence of the crowd. One passage, found in the Gospel of Matthew, has the crowd saying (of Jesus), “Let his blood be upon us and upon our children.”[Matthew 27:25]

Matthew refers to Barabbas only as a “notorious prisoner”.[Matthew 27:16] Mark and Luke further refer to Barabbas as one involved in a στάσις (stasis, a riot), probably “one of the numerous insurrections against the Roman power”[4] who had committed murder.[Mark 15:7][Luke 23:19] Robert Eisenman states that John 18:40 refers to Barabbas as a λῃστής (lēstēs, “bandit”), “the word Josephus always employs when talking about Revolutionaries”.[a]

Three gospels state that there was a custom that at Passover the Roman governor would release a prisoner of the crowd’s choice; Mark 15:6, Matthew 27:15, and John 18:39. Later copies of Luke contain a corresponding verse (Luke 23:17), although this is not present in the earliest manuscripts, and may be a later gloss to bring Luke into conformity.[5]

The custom of releasing prisoners in Jerusalem at Passover is known to theologians as the Paschal Pardon,[6] but this custom (whether at Passover or any other time) is not recorded in any historical document other than the gospels, leading some scholars to question its historicity and make further claims that such a custom was a mere narrative invention of the Bible’s writers.[7][8]

There exist several versions of this figure’s name in gospel manuscripts, most commonly simply Biblical Greek: Bαραββᾶς, romanized: Barabbās without a first name. However the variations (Biblical Greek: Ἰησοῦς Bαῤῥαββᾶν, romanized: Iēsoûs Bar-rhabbân, Biblical Greek: Ἰησοῦς Bαραββᾶς, romanized: Iēsoûs Barabbâs, Biblical Greek: Ἰησοῦς Bαῤῥαββᾶς, romanized: Iēsoûs Bar-rhabbâs) found in different manuscripts of the Matthew 27:16–17 give this figure the first name “Jesus”, making his full name “Jesus Barabbas” or “Jesus Bar-rabban”, and giving him the same first, given name as Jesus.[b] The Codex Koridethi seems to emphasise Bar-rabban as composed of two elements in line with a patronymic Aramaic name.[10][11] These versions, featuring the first name “Jesus” are considered original by a number of modern scholars.[12][13] The Church Father Origen seems to refer to this passage of Matthew in claiming that it must be a corruption, as no sinful man ever bore the name “Jesus” and argues for its exclusion from the text.[14] He however does not account for the high priest Biblical Greek: Ἰάσων, romanized: Iásōn from 2 Maccabees 4:13, whose name seems to transliterate the same Aramaic name into Greek, as well as other bearers of the name Jesus mentioned by Josephus.[10] It is possible that scribes when copying the passage, driven by a reasoning similar to that of Origen, removed this first name “Jesus” from the text to avoid dishonor to the name of the Jesus whom they considered the Messiah.[15]

The name Biblical Greek: Bαραββᾶς, romanized: Barabbâs appears in some Greek gospel manuscripts. It appears to derive ultimately from Imperial Aramaic: בּר אַבָּא, romanized: Bar ʾAbbā, lit. ‘Son of ʾAbbā/[the] father’,” a patronymic Aramaic name.[10] However, ʾAbbā has been found as a personal name in a 1st-century burial at Giv’at ha-Mivtar. Additionally it appears fairly often as a personal name in the Gemara section of the Talmud, a Jewish text dating from AD 200–400.[16]