This is – excellent! We have a double rainbow with three Queens who are not with us, and, we have an image of a future Queen walking with Harry and Meghan.

William, Kate, Harry and Meghan together pay tributes to Queen at Windsor Castle 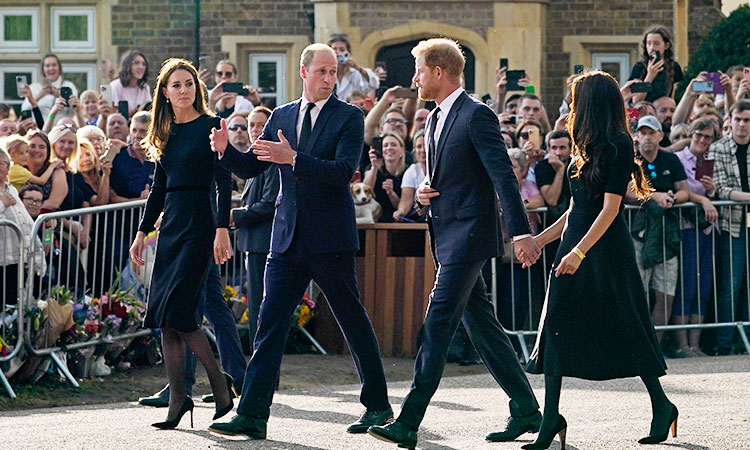 William, Catherine, Harry and Meghan walk to greet the crowds after viewing the floral tributes for the late Queen Elizabeth II outside Windsor Castle on Saturday. AP

The two couples, all dressed in mourning black, were seen together looking at the growing banks of flowers left at the gates of Windsor Castle since the queen’s death on Thursday aged 96.

William and Harry, Kate and Meghan were once dubbed “the fab four,” with hopes they could together secure the monarchy’s appeal to younger generations. But relations between them reportedly soured soon after former British Army captain Harry’s wedding to Meghan, a mixed-race American television actress, at Windsor in 2018. 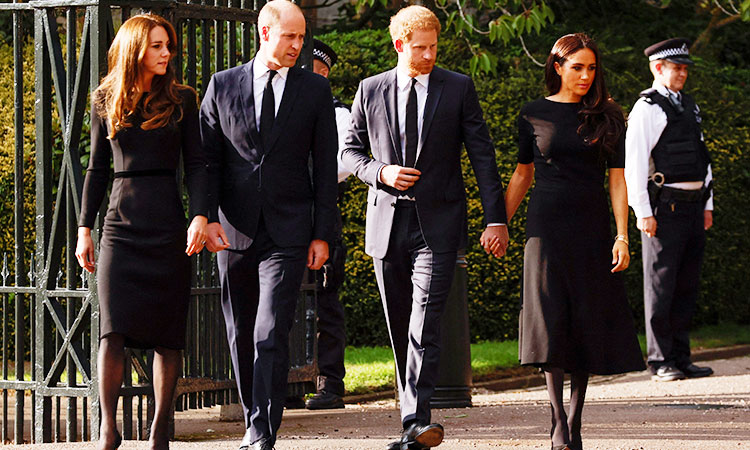 William, Catherine, Harry and Meghan walk outside the Windsor Castle on Saturday. Reuters

The sight of the two couples together — even if they separated to speak to and shake hands with different sides of the cheering crowds — will likely spark rumours of a private reconciliation.

Harry, 37, who admitted publicly he and his brother were “on different paths”, announced that he and Meghan, 41, were quitting royal life in early 2020.
The two couples had last been seen together at the Commonwealth Day service at Westminster Abbey in 2020, just days before their bombshell announcement.

They moved to the United States, from where they have made repeated public criticisms of life in the institution, including claims of racism. That prompted William, 40, to angrily insist that “we are very much not a racist family.”

Harry also claimed that William, who is now heir to the throne after their grandmother’s death, and their father Charles, the new king, were trapped in a hidebound institution. But Charles offered what has been interpreted as a clear olive branch to his self-exiled son, who now lives in California and is seeking to reinvent himself as a wellness and social justice advocate.

In his first speech as king on Friday, Charles, 73, spoke of his love for his second son and daughter-in-law. 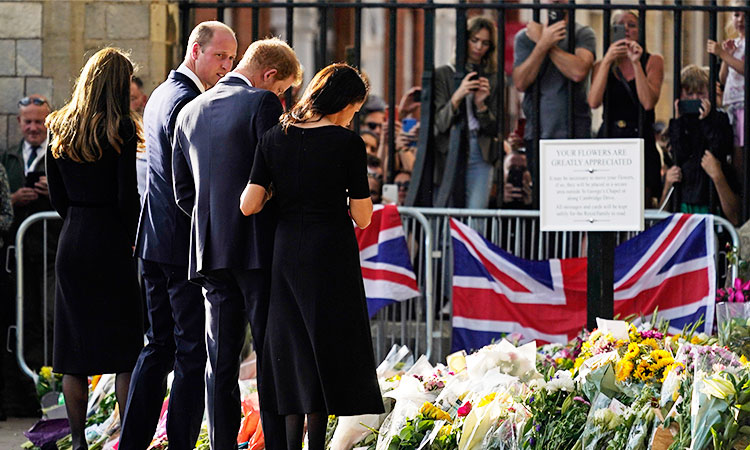 Relations between the brothers – from Charles’ first marriage to princess Diana – were visibly frosty when they reunited last year to unveil a statue to their mother. They did not meet during the queen’s Platinum Jubilee celebrations in June.

Harry and Meghan are staying at Frogmore Cottage on the Windsor estate, just a stone’s throw from William and Kate’s new home, Adelaide Cottage. British media said despite their proximity the couples had no plans to meet — until the queen’s death on Thursday.

Harry and Meghan were initially on a whistle-stop tour, attending two charity events in Britain and another in Germany for the former’s Invictus Games for disabled veterans. But they are now expected to stay for the queen’s funeral at Westminster Abbey in London on Sept.19.