Too Political and Too Divisive?

Not once have I seen a reporter, or read a column or story, where the Common Democrat is asked…

“How does it feel to be accused of being a thief – and all you did was vote? Why did you want Joe Biden to steal the election from President Trump – who is the rightful President – right?”

Most networks refused to carry our President’s address. Why? President Biden was forced to address The Un-Asked Question. are the actions of my kin, John Fremont, to end slavery in America. You can say he was VERY DIVISIVE!

Above are pics of Governor Perry and wife with Neo-Confederates. Would Nixon and Reagan take our President’s side, knowing Insurrectionists and Neo-Confederates took over the Republican Party, and, are poised to take over our Democracy? If they do, will they allow Democrats – and their children – the right to vote, or, even be members of The Only Party?

Networks refused to air Biden’s primetime address live because it was too political (msn.com)

Several major news networks opted to not air President Joe Biden’s “soul of the nation” address on Thursday night, due in part to the contents of the speech and for how close the speech was given ahead of the midterm elections.

CBS, NBC, ABC, and Fox News did not air the speech, in which Biden criticized former President Donald Trump and “MAGA Republicans” for trying to take the country backwards, live. The networks instead chose to air reruns of their shows while Fox aired the most recent episode of Tucker Carlson Tonight, while MSNBC and CNN aired the speech live, according to the Washington Post.

“MAGA Republicans do not respect the Constitution,” Biden said during his address. “They do not believe in the rule of law. They do not recognize the will of the people. They refuse to accept the results of a free election.”

The Republican Party was born in the 1850s as a primary vehicle to oppose the expansion of slavery in the United States. In 1856, Republicans nominated one of California’s inaugural senators, John C. Frémont, for the 1856 presidential election,[4] but he lost the state by a wide margin to Democrat and eventual winner James Buchanan, though he did win the state of New York. Later in 1860, Abraham Lincoln was elected to the presidency as the first Republican president. The Republican Party would emerge as primary opposition to the Democratic Party until the present day.

After Ted Nugent performed at Perry’s 2007 inauguration ball wearing a shirt emblazoned with the Confederate flag, reporter Jay Root called Nugent to ask about the uproar. Nugent, who calls it the “Rebel Flag,” said the “good governor” called him afterward to express his continued support.

“He called me to tell me, when they attack me for wearing the Rebel Flag, ‘Be sure you tell them that I as governor support the waving of the Rebel Flag at the Laredo Airport,’” Nugent says in the interview. Nugent says Perry told him what to say to the critics: “Tell them to drop dead.”

Multimedia: Parsing Perry’s Past on Race | The Texas Tribune 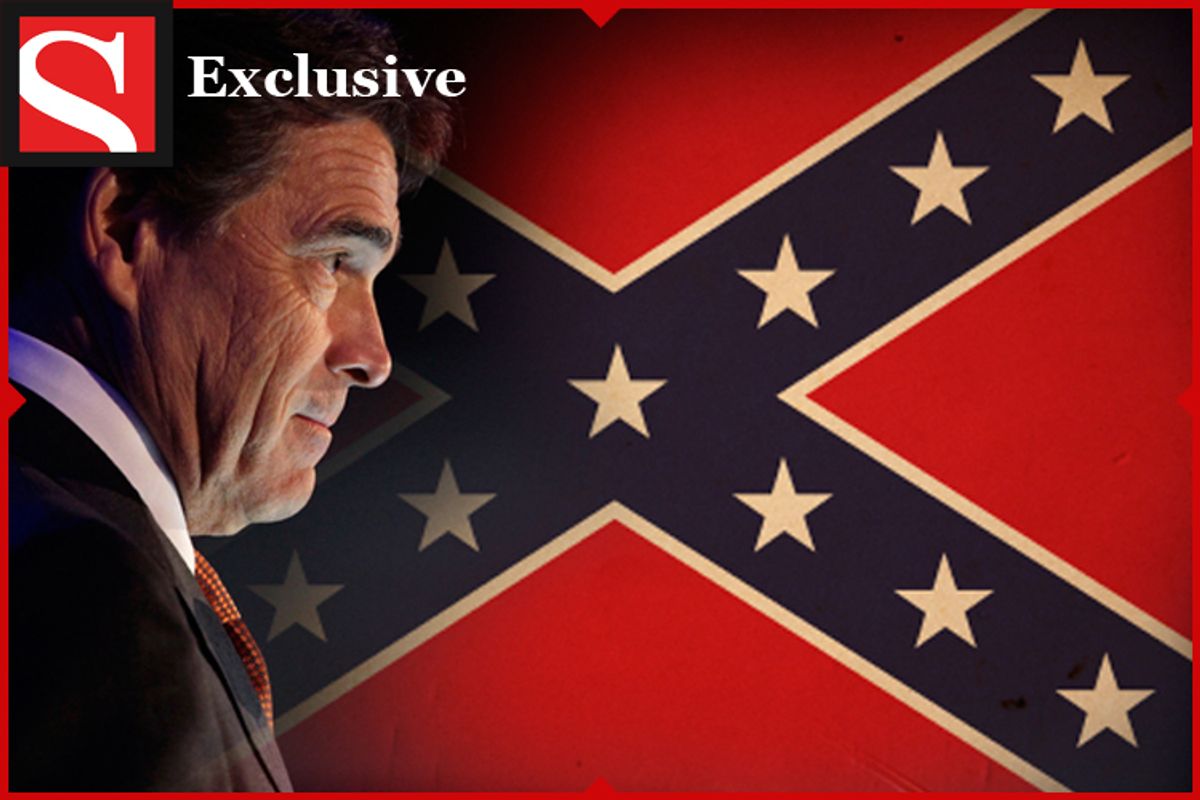 Rick Perry made national headlines in 2009 when, during a speech to a Tea Party group, he floated the possibility that Texas could secede from the union. But the governor’s substantive ties to the neo-Confederate movement may be deeper than previously known.

This is the document, published by the League of the South on its website DixieNet.org; it was unearthed by Edward Sebesta, a Texas-based independent researcher and co-editor of “Neo-Confederacy: A Critical Introduction.” (Click the image for larger size.)

The Republican Party was born in the 1850s as a primary vehicle to oppose the expansion of slavery in the United States. In 1856, Republicans nominated one of California’s inaugural senators, John C. Frémont, for the 1856 presidential election,[4] but he lost the state by a wide margin to Democrat and eventual winner James Buchanan, though he did win the state of New York. Later in 1860, Abraham Lincoln was elected to the presidency as the first Republican president. The Republican Party would emerge as primary opposition to the Democratic Party until the present day.

California Republicans and Democrats were competitive throughout the late 19th century. In 1878, Republican California Senator Aaron A. Sargent introduced the language that would become the 19th Amendment to the Constitution, which would allow women the right to vote.[4]

Republicans dominated state politics for most of the 20th century (they controlled the state senate from 1891 to 1958) until the 1960s when the Democrats once again became competitive with the rightward shift of the Republican Party, exemplified by their nomination of Barry Goldwater in 1964 (Goldwater lost California in a landslide).[5] Republicans still saw ample success up until the 1990s. George H. W. Bush carried the state in 1988 after Ronald Reagan twice carried the state in 1984 and 1980. Pete Wilson was elected Senator in 1988, and John Seymour was the last Republican Senator from California after being appointed to the seat in 1991.

California’s Latino and Asian populations grew significantly in the 1990s and the growing segment of voters were turned off by the Republican Party’s hard-line stance on immigration (the Party closely tied itself to Proposition 187). Democrats have won most elections at the state, local, and federal levels since the 2000s by comfortable margins. For example, despite failing to win the presidency, Hillary Clinton won a higher percentage of votes than any candidate since Franklin D. Roosevelt.[5]

In 2018, the California Republican Party had fewer registered voters than voters registered with a no party preference option, but that trend reversed in 2020.[6][7]

The following is a list of Republican statewide, federal, and legislative officeholders:

With the passage of Prop 14 in 2010 setting up a jungle primary system in California, there were two US Senatorial elections in California in which no Republican made the general election: the 2016 election and the 2018 election.

Out of the 53 seats California is apportioned in the U.S. House of Representatives, 10 are held by Republicans:

The last Republican to serve as lieutenant governor was Abel Maldonado, who was appointed in 2010 by Schwarzenegger to fill the vacancy when John Garamendi resigned to take a seat in Congress. Maldonado lost his election in 2010 for a full term, and left office in January 2011. The last Republican elected to the position was Mike Curb, who was elected in 1978 and served until January 1983.

The last Republican to serve as Attorney general was Dan Lungren who was elected in 1990 and served until January 1999.

The last Republican to serve as State treasurer was Matt Fong who was elected in 1994 and served until January 1999.

The last Republican to serve as State controller was Houston I. Flournoy who was first elected in 1966 and served until January 1975.

The last Republican to serve as the Superintendent of Public Instruction (which is officially a non-partisan position) is Max Rafferty, who was first elected in 1962 and served until January 1971.

Board of Equalization, State Senate and Assembly[edit]

Republicans hold one of the four non-ex-officio seats on the State Board of Equalization:[8]

Republicans hold 19 of the 80 seats in the State Assembly.[9] The last time the Republicans were the majority party in the Assembly was during 1994–1996.

Of California’s ten largest cities, two have Republican mayors as of July 2022:

There are semi-autonomous county central committees for each of California’s 58 counties.[12][16] At every direct primary election (presidential primary) or when district boundaries are redrawn,[19] their members are either elected by supervisor district or Assembly district depending on the county.[20]