The scenes of Marioupal are right out of Lords of The Ring. Millions of alleged Christian men in America and Russia have long thirsted for a Day of Hell so they can be on the side of Jesus and Righteousness. They are on the side of Evil and Brutal Darkness.

It is now clear Donald Trump was controlled by Putin’s Brain, and the The Evil Spirit of The Anti-Christ…..Giulio Cesare Andrea Evola, who was born and died in Italy from where the De Santis family hail. I am going to try and find out if this family has ties to The Carbones and if they were a Guelf or Ghibellines. Dion means “God of Wine” after Dionysus.

God has drawn a line in the sand so mankind can now see – WHO IS ON HIS SIDE! The way to tell a Christpos Orc, from a ordinary Christian, is, they do NOT BELIEVE the Democrats stole the election, but, say they do. God identifies them this way – too! Also, they have a secondary reproductive organ that looks like a little pig’s prick. They entwine it with other pig’s pricks to make Super Orcs like we find in the Freedom Caucus that had the means to know Trump was telling twisted-pig lies. Super Orcs are trying to destroy Disneyland, and replace it with Twisted Roman Pig Land.

It derives from the late Latin sanctus which means ‘holy / venerable’ linked to the verb sancire or ‘to make sacred’. The spread of the surname from the Christian Middle Ages is obviously due to the worship of the various saints present in the Roman Martyrology.

“Do you intend to reconstitute the Roman Empire?” It was a simple question, but Il Duce did not understand.

The question was posed during a 1932 meeting between the American evangelical missionaries Edith and Ralph Norton and the rising Italian dictator Benito Mussolini, also known as Il Duce (The Leader). The Americans explained to Mussolini what many of their evangelical brethren believed: the end was near. According to the Nortons’ reading of Biblical prophecy, Jesus’ Second Coming would be heralded by the nations of the earth banding together in a global, ungodly confederacy. At the head of the coalition would rule the figure known only as ‘the Antichrist,’ a terrible dictator who was destined to be defeated by Jesus in the battle of Armageddon, bringing about a thousand years of peace and joy. When Americans heard about an Italian dictator uniting Italy, some could not help but think that the Roman Empire would return, and with it the end of days. 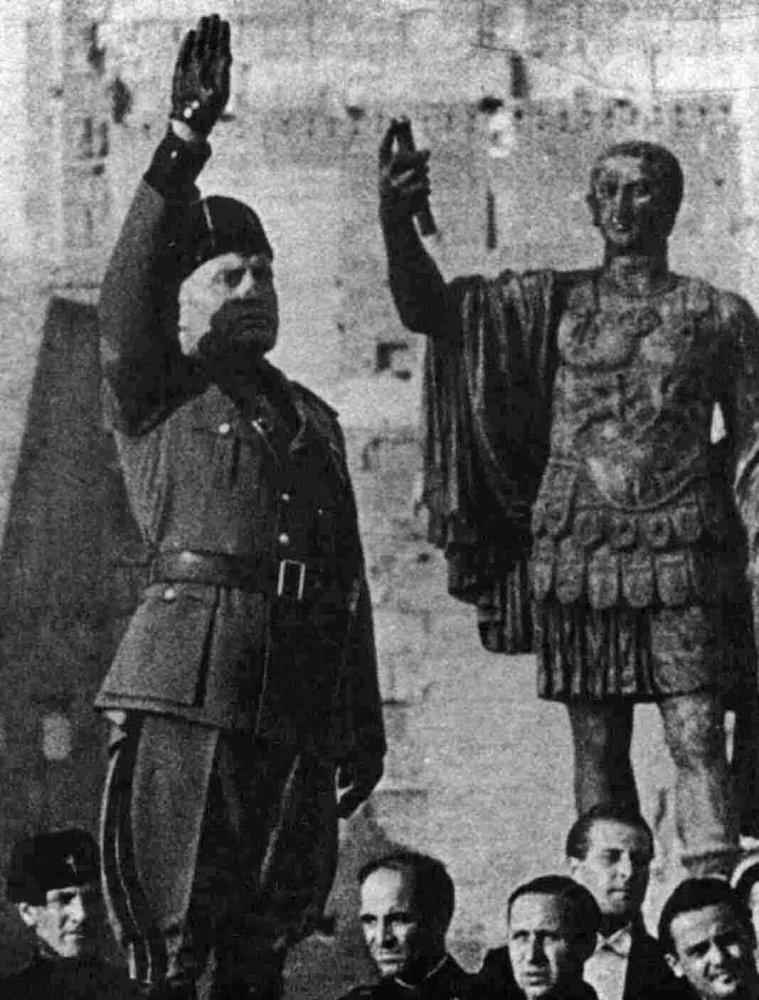 Mussolini with Emperor Augustus in background.

Looking for the Antichrist: A Sign of the Times in Rome | The National Endowment for the Humanities (neh.gov)

Ronald Dion DeSantis (born September 14, 1978) is an American politician and attorney serving as the 46th governor of Florida since 2019. Before assuming the governorship, DeSantis served as a member of the U.S. House of Representatives for Florida‘s 6th district from 2013 to 2018.

Born in Jacksonville, DeSantis spent most of his childhood in Dunedin, Florida. He graduated from Yale University and Harvard Law School. DeSantis joined the United States Navy in 2004, where he was promoted to lieutenant before serving as an advisor to SEAL Team One and being deployed to Iraq in 2007. When he returned to the U.S. a year later, the U.S. Department of Justice appointed DeSantis to serve as an assistant U.S. attorney at the U.S. Attorney’s Office in the Middle District of Florida, a position he held until his honorable discharge in 2010.

DeSantis was first elected to Congress in 2012, defeating his Democratic opponent Heather Beaven. During his tenure, he became a founding member of the Freedom Caucus and was a known ally of President Donald Trump. DeSantis frequently criticized Special Counsel Robert Mueller‘s investigation into Russian interference in the 2016 U.S. presidential election. He briefly ran for U.S. Senate in 2016, but withdrew when incumbent senator Marco Rubio sought reelection.

During his 2018 gubernatorial campaign, DeSantis emphasized his support of Trump. He won the Republican nomination in August, and chose state representative Jeanette Nuñez as his running mate. The close results of the general election between DeSantis and the Democratic nominee, Tallahassee mayor Andrew Gillum, triggered a machine recount. DeSantis was certified the winner with a 0.4% margin of victory.

During the COVID-19 pandemic in Florida, DeSantis resisted imposing restrictions such as face mask mandates, stay-at-home orders, and vaccination requirements. In May 2021, he signed into law a bill that prohibited businesses, schools, cruise ships, and government entities from requiring proof of vaccination.

He held that the Ghibellines, who had fought the Guelph for control of Northern and Central Italy in the thirteenth century, had within them the residual influences of pre-Christian Celtic and Nordic traditions that represented his conception of the Grail myth. He also held that the Guelph victory against the Ghibellines represented a regression of the castes, since the merchant caste took over from the warrior caste.[39][page needed] In the epilogue to this book, Evola argued that the fictitious The Protocols of the Elders of Zion, regardless of whether it was authentic or not, was a cogent representation of modernity.[40][41] The historian Richard Barber said,

Evola mixes rhetoric, prejudice, scholarship, and politics into a strange version of the present and future, but in the process he brings together for the first time interest in the esoteric and in conspiracy theory which characterize much of the later Grail literature.[42]

Twenty million evangelicals registered as Republicans are claiming their party is the Party of Jesus. Well, this is a damnable lie – just looks at the candidates that God & Son have put before the nation and the world! God can do way better then this!

These are lying, unfaithful, greedy and murderous Orcs who launched a false Crusade against Iraq! These murderers need to take a bath and wash the blood of innocent children off their foul smelling bodies!

Jesus did not found the United States of America because he did not free the slaves, give them – and women – the right to vote! These monsters hide behind the crucified Jesus and use him as their personal puppet to take from the poor!

It’s time to tax the dirty political church that are Parasites for Satan.