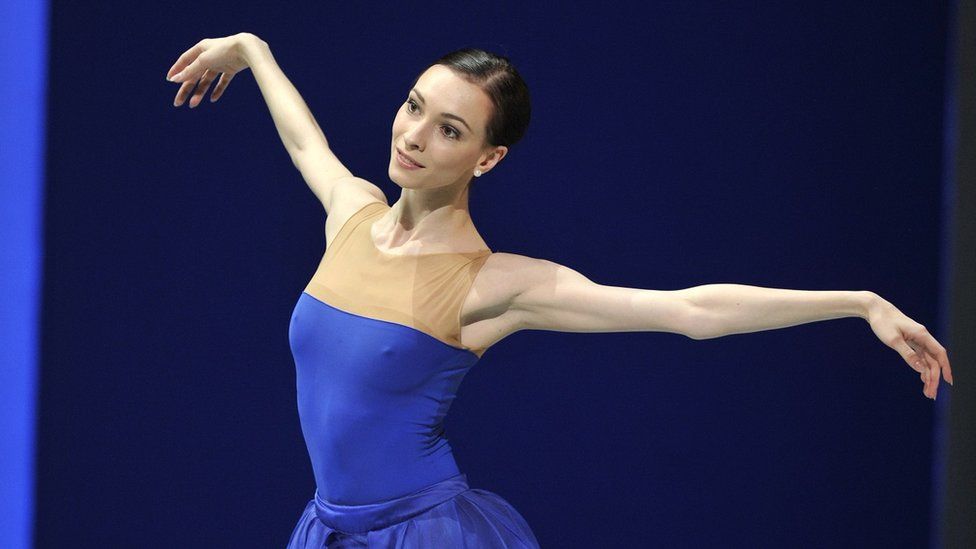 SYNOPSIS: A famous Russian Ballerina flees for her life to America after the Revolution. The Bolsheviks put a bounty on her head because she was the favorite of the Czar and his family. Nichola’s daughter imitated her, wanted to be like her.

She is captured by Indians while on a stagecoach going West. A Handsom young buck wants her for his wife, but, she has to perform the tribal dance ritual. She nails it – and then some! She is the founder of the Peaceful Spirit Dance that brings peace to all the Plaines tribes. She is given a war bonnet which she performs her famous ballet in when she comes to Laramie. The sheriff does not buy a word of her story. She challenges him to a Dance-off at High Noon in the middle of the street. He brings his posse of young dudes, and she brings her Hooped Maidens who throw off their hoop-skirts to expose skin-tight leotards with tutu. The older church ladies -gasp! A Gay Man in pink, scolds them, then does his Happy to be Pink dance. The bare-chested dudes wearing lamb-chaps – thrust out their chest and circle the happy hoop maidens. The Handsom Buck – now a chief – blows into town for the grand finale.

I will author a version for the Kabuki Theatre.

The actor previously roasted the director’s film, which is nominated for 12 Academy Awards

Fox News Flash top entertainment and celebrity headlines are here. Check out what clicked this week in entertainment.

Listen to this article

Jane Campion offered to settle her feud with Sam Elliott in the ol’ fashioned way.

The “Power of the Dog” director recently appeared on the Hollywood Reporter’s “Awards Chatter Podcast” and revealed the pair had unfinished business to take care of.

“OK, Sam, let’s meet down at the Warner Bros. lot for a shootout!” the 67-year-old joked to the outlet. “I’m bringing Doctor Strange [the Marvel character portrayed by Benedict Cumberbatch, the star of her latest film] with me!”

A spokesperson for the 77-year-old didn’t immediately respond to Fox News Digital’s request for comment.

SAM ELLIOTT ADMITS HE’S NOT A ‘YELLOWSTONE’ FAN, SAYS IT’S ‘TOO MUCH’ LIKE ‘DALLAS’

Jan Campion challenged Sam Elliott to a movie ‘shootout’ amid their feud over ‘The Power of the Dog’. (Getty Images)

The real-life drama began when Elliott criticized the 67-year-old’s take on the Western genre during his recent appearance of Marc Maron’s “WTF” podcast.

When Elliott was asked if he had seen the film, the star replied, “You want to talk about that piece of s—?”

Elliott referenced a full-page ad in the Los Angeles Times that featured a review blurb that described the film as “an evisceration of the American myth.” The film is also nominated for 12 Academy Awards.

“I thought, what the f—?” Elliott said of the adaptation from the 1967 novel by Thomas Savage. “This is a guy who has done Westerns his entire life. ‘The evisceration of the American myth.’ It looked like — what are all those dancers, those guys in New York that wear bow ties and not much else? Remember them from back in the day?”

Sam Elliott didn’t hold back when it came to criticizing ‘The Power of the Dog’. (Photo by Vincent Sandoval/Getty Images)

“That’s what all these f—ing cowboys in that movie looked like,” Elliott replied. “They’re all running around in chaps and no shirts. There’s all these allusions to homosexuality throughout the f—ing movie.”

Maron replied, “Yeah, I think that’s what the movie’s about,” speaking to the fact that Cumberbatch’s character, Phil Burbank, is homosexual and has yet to come out of the closet.

It was then that Elliott fixed his crosshair on Campion, who is nominated for three Academy Awards this year.

Sam Elliott, seen here with Jane Russell, has made his mark in Westerns during his decades-long career. (Photo by NBCU Photo Bank/NBCUniversal via Getty Images via Getty Images)

“[Jane Campion’s] a brilliant director, by the way,” Elliott insisted. “I love her work, previous work. But what the f— does this woman from down there, New Zealand, know about the American West? And why in the f— does she shoot this movie in New Zealand and call it Montana and say, ‘This is the way it was?’ So that f—ing rubbed me the wrong way, pal.”

“I mean, Cumberbatch never got out of his f—ing chaps,” Elliot maintained of the film. “He had two pairs of chaps — a wooly pair and a leather pair. And every f—ing time he would walk in from somewhere … he never was on a horse, maybe once — he’d walk into the f—ing house, storm up the f—ing stairs, go lay in his bed in his chaps and play his banjo. It’s like, what the f—?”

Meanwhile, Netflix appeared to have heard Elliott’s remarks, and a day after the interview was sent into the ether, the streaming giant tweeted a scene that showed Kodi Smit-McPhee’s character telling his mother, who is played by Kirsten Dunst, “He’s just a man. Only another man.”

Elliott doubled down on his sentiment by the end of the back and forth, adding, “Where’s the Western in this Western?… I took it f—ing personal, pal.”

During the DGA Awards on Saturday night, Campion had a few choice letters in response to Elliott’s criticism of her film.

The director, who was asked for her response about the actor’s shocking comments, refused to hold back.

“I’m sorry, he was being a little bit of a B-I-T-C-H,” she told Variety before the ceremony. “He’s not a cowboy; he’s an actor. The West is a mythic space and there’s a lot of room on the range. I think it’s a little bit sexist.”

Campion noted that she viewed Elliott’s crude criticism as a slight against her as a female filmmaker.

“When you think about the number of amazing Westerns made in Spain by (director) Sergio Leone,” she explained to the outlet. “I consider myself a creator. I think he thinks of me as a woman or something lesser first, and I don’t appreciate that.”