“Eugene lost one of its most creative artists last week. Cancer stole Catherine Vandertuin from us when she was far too young. In her too-short time here, Vandertuin, the founder and artistic director of Eugene Chamber Theatre, applied enormous energy, creativity and collaboration to the innovative theater/music productions of Dust and Dreams, Antigone, The Descent of Innana and Ice Cure, the last adapted from an original manuscript. She also collaborated in various puppet and mask theater productions. Her vision was to create multi-disciplinary works that explored themes of balance and wholeness. Catherine brought Javanese gamelan music to Eugene in 1992 with the founding of Gamelan Nuju Laras, well known for accompanying labyrinth walks created by her partner, Jeff Burch. Although her theater work and family obligations eventually forced her to give up the gamelan, Catherine’s contribution continues in Nuju Laras’s successor, Gamelan Sari Pandhawa, and the 90-piece Javanese gamelan Gamelan Kyai Tunjung Mulya, whose construction she commissioned and supervised. Gamelan Kyai Tunjung Mulya was ultimately donated to the UO where it is used to teach UO students and other community members. Through her teaching at LCC, collaborations with other community artists, and irrepressibly creative spirit, Catherine made Eugene a much more artistically vital place, and her legacy will live on in the audiences she touched and the artists she taught and inspired.”

Belle’s mother would approve of the peace we make – in the name of art, dance, music, and culture. We could take up the gauntlet of Catherine Vandertuin who was at the epicenter of Drama in the Emerald Valley. I wish I had met her. I see a Kabuki Play…..Belle and The Old Man. Gamelan music will play a role in ‘The Royal Janitor’.

I don’t want to harp on this, but I just noticed the date when I posted ‘Belle of The Labyrinth’. Haffner moved downstairs at this time. She must have read this post, and believing we were destined to be lovers, she did everything she could to slime our bond. This would be the basis of a old movie or play, where a beautiful young woman from Beautyville crosses the river into Ugly Town to model for a handsome old artist. To get to his studio, she has to go through a gauntlet of grotesque women who are called ‘The Lane Eleven’. This is Artaud’s ‘Theatre of the Absurd’ that was inspired by Gamelan music. In the last scene of ‘Victorious Flower’ we see Belle do a modern ballet to the bottom of the stairs to Juan’s studio. But, the Lane Eleven block her way. We see her struggle to crawl out from under a ton of blubber, and is climbing the stairs to her destiny, when, she is dragged down into the Big Ugly Pile that has always thwarted the Beautiful People.

Advice from the Cemetery (wordpress.com)

“Lock her up! Lock her up!” They cry…and carry her off to Uglyville prison. How she is the “Victorious Flower” is never revealed because the audience of politically correct women are livid, and are going out of their mind at this unabashed display of Fat Shaming that is accompanied by Gamalen music and a recording of Antonin Artaud doing his demented cackling thing.

I am just beginning to grasp that being tormented by El Lardo and her gang, may be the greatest compliment ever paid a writer and artist.  Ken Kesey just pretended he was abused and oppressed by a cruel nurse. Half-ton was a nurse at the Johnson Unit where she was taught to treat the mentally ill with tender mercy.

Antonin Artaud and Lucia Joyce spent some time locked up in a Mental Ward.

The Inpatient Behavioral Health Unit is located in a remodeled and expanded space on the campus of PeaceHealth Sacred Heart Medical Center, University District, in Eugene. This acute psychiatric unit provides a safe and healing environment in which to treat people experiencing psychiatric crises.

Treatment involves medical, psychological and social services, and is specific to each patient. The amount of time a patient stays on the Unit is generally brief, usually less than a week. Each patient is encouraged to participate in his or her own care, and the patient and family help make decisions about treatment. Care is provided in the least restrictive environment that will assure both safe and effective treatment of patients. 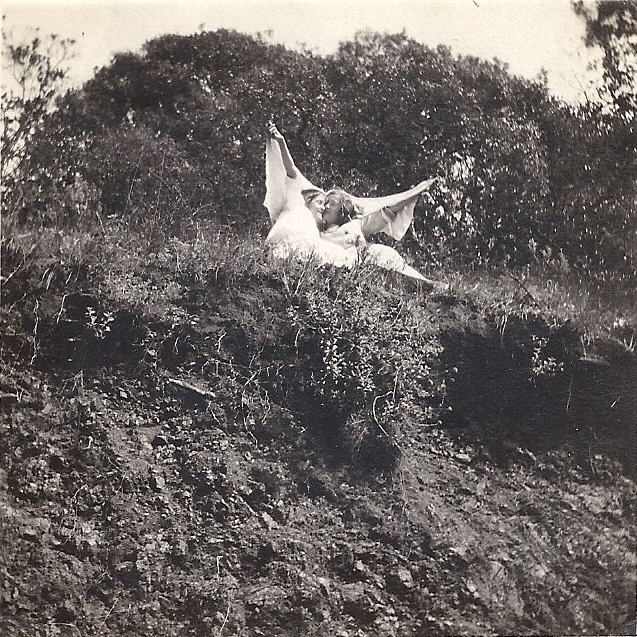 Just before Christmas I had some discussions with the author Charles J. Shields about who will write the story of the love affair between Samuel Beckett, and Lucia Joyce, the daughter of James Joyce who wrote Finnegan’s Wake.

A Flower Given to My Daughter
Frail the white rose and frail are
Her hands that gave
Whose soul is sere and paler
Than time’s wan wave.

Rosefrail and fair — yet frailest
A wonder wild
In gentle eyes thou veilest,
My blueveined child.

Greg Presco Charles, I hope I am not stepping on any toes, here. Were you thinking of authoring Lucia Joyce’s biography. I just googled her and her father and his work. My grandfather, whom I never met, was a poet, and when I began authoring poetry (while in a trance) at twelve, my mother and aunts became alarmed because they were bid to loathe their father. I wrote this poem a year ago to a young woman who worked at Starbucks. I read it with an Irish brogue.

Greg Presco: Charles has lobbed some balls across my plate with his steam motorcycle and Joyce. In my un-finished novel ‘The Gideon Computer’ the last hippie of the future channels a Nazi whose love for wood-burning cars allows him to get near the hard-water German is making, and helps sabotage the plants. These A-bombs would be delivered with V2 rockets. My ex had shown my Pynchon’s books, but, I found them a hard read.

How this man would eventually be recruited to brainstorm with the Jefferson Airplane and be hipper than his own children are among the mysteries on which Mr. Shields casts light.

Belle of The Labyrinth

Belle was a born actress who lost her mother when she was nine. Her facial expressions tell stories.  My hypothetical dilemma would have fascinated Salvador Dali who spent most of his life trying to free our minds from the fantastic surrealist prisons he invented that were vastly superior to our fleeting moments of freedom. Was Salvador ever a ‘Prisoner of Love’? Was he ever chased down the street by a gaggle of screeching Sirens?

Art, Literature, Poetry, Ballet, and the Stage are packed to the ceiling with Creative Obsessions. Failed Artist, Alley Valkyrie, in the inventor of Un-Art. Not Forbidden Art, there is enough of that around, but art that goes thud in the night.  Artaud warns of this bludgeoning that renders us artists, impotent in every way. I thought it was our age difference, at first. But now I conclude it is the poem I wrote Belle three hours after we  met. No man, or woman, ever wrote Alley a poem. Not even the New Age Orwellian, John Monroe. What came between Belle and I has been the National Topic for two weeks.

“Quit making art – or you have to answer to me and the Lane Eleven! I mean it! If you apply one more stroke to your portrait of Belle, I will make sure your mug will be posted on every telephone booth in the Whiteaker. I will personally encourage residents to spit on you – even piss on you!”

In our video below, Belle asks if I am videotaping her. I say I am.

“May I ask why?” This natural born flirt and model asks – with much animation! Pro photographers can’t get pro models to do what Belle does – with ease! Every tenth frame she has changed her pose. She is aware she is posing.

“I have a blog, and I write about, poets, artists, and Bohemians, the history of them, and why they should survive as a people, and not be persecuted.”

“We can talk. What’s your phone number?”

Great! We have established a common goal! Belle is an artist and a poet! 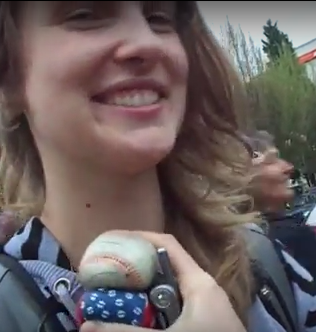 Keep in mind, Alley, Belle, and I are advocates for the Poor and Homeless, which can describe an aspect of Bohemianism. With the Dali Connection to just about everything in this blog, I am set free! I own a Great Artistic Liscence that might allow me to get away with murder! It is the antithesis of O.J.’s Glove.

“Look your Honor. Everything fits! It’s all tied together. It’s as if Art is God, and God looked down on Mr. Presco and said………..”In him, I am well pleased! Did not God send Belle to Jon so he can render the most important, redeeming, and beautiful works of art?”

“Art itself has set Mr. Presco free. There is nothing more We Mere Men of Justice can do in this case. We are out of Presco’s league!

“Curses! I loath the Patriarchy!”

“Dali is dead! Long live the Savior of the Art World!”

I have tried hating Belle for what she did. She sicked the Hounds of Hell on me. But was it her mother’s voice that rose up from Hades, and………..

“Forgive my dear Belle. Blame it on Venus in Retrograde, and The Descent of Inanna. Behold -Belle! Not my daughter. Not my creation. But, the Labyrinth Dancer!”

After choosing Belle Burch as my muse and model, I found out her mother and father did Labyrinth Dances to Gamelan music in Eugene. I was going to paint her as Fair Rosamond. Sekar Jaya, means ‘Victorious Flower’.  This group was given a grant by NEA.

I was building the Rose of the World Maze around Belle in order to overcome Putin – years before Trump got elected with the help of Putin.

Founded in 1979 by I Wayan Suweca, Rachel Ann Cooper and Michael Tenzer, Gamelan Sekar Jaya (GSJ) was the first community-based Balinese gamelan in the United States.[4] Most of its performers are American volunteers, taught and led in performance by visiting Balinese master artists.[5][6]

Popular both in the States and abroad, the group has performed all over North America and has toured Bali seven times (1985, 1992, 1995…