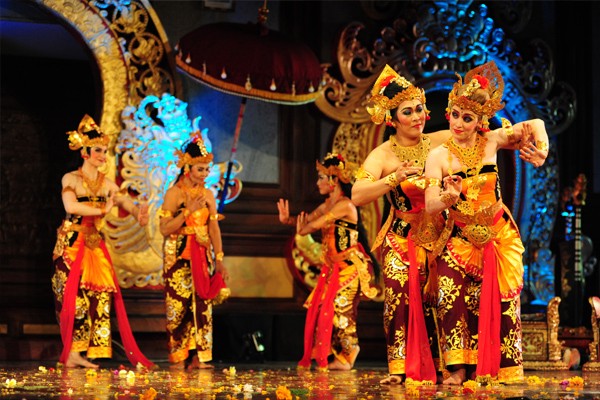 After choosing Belle Burch as my muse and model, I found out her mother and father did Labyrinth Dances to Gamelan music in Eugene. I was going to paint her as Fair Rosamond. Sekar Jaya, means ‘Victorious Flower’.  This group was given a grant by NEA.

I was building the Rose of the World Maze around Belle in order to overcome Putin – years before Trump got elected with the help of Putin.

Founded in 1979 by I Wayan Suweca, Rachel Ann Cooper and Michael Tenzer, Gamelan Sekar Jaya (GSJ) was the first community-based Balinese gamelan in the United States.[4] Most of its performers are American volunteers, taught and led in performance by visiting Balinese master artists.[5][6]

Gamelan is the Indonesian term for orchestra, and the name “Sekar Jaya” translates roughly to “Victorious Flower.”[11]

National Endowment for the Arts Announces $5.2 Million in Grants to Support Arts and Innovation in California

The National Endowment for the Arts has awarded nearly $5.2 million to California arts organizations in its second round of funding for fiscal year 2018. Federal dollars totaling $5,193,800 will benefit 144 grantees up and down the state.

The spring announcement includes annual partnerships with state, jurisdictional, and regional arts agencies as well as the categories of Art Works, Creativity Connects, Our Town, and Research: Art Works. Funds will support a range of programs that provide jobs to artists, arts administrators, and other creative workers and arts experiences in California. As a state partner, the California Arts Council will receive a portion of those funds — in the amount of $1,155,300 — to support arts programs, services, and activities associated with carrying out the agency’s strategic plan.

“The variety and quality of these projects speaks to the wealth of creativity and diversity in our country,” said NEA Chairman Jane Chu.

Roza Mira and The Divine Feminine

I just came upon these posts about Ruslana and the Rose of the World made in 2012, two years before I beheld Belle. No wonder I was enthralled, especially after she told me her name.

Leonard DaVinci would enjoy the vision of Daniel Andreev, he perhaps rendering beautiful images to go with the idea of a Divine Feminine that was explored by Denis de Rougemont who envisioned a One World Government.

I found the Roza Mira oil and gas company. Are they associated with the Roza Mira Prophecy who has plans to unite all the religions of the world? My Bohemian Bank was calling for such a thing, we Bohemians anointing our own middle men in the oil game in order to fund the Arts.

Did the Roza Mira Training center try to employ super model Ruslana to help develop their brand name ‘Rose of the World’? If so, is Roza Mira looking at my blogs, and my famous sister, Rosamond?