Challenging The Ethics of Alcohol Justice

It is 4;02 A.M.in the morning. I just heard the approach of a train in the distance. It came close, and closer till I heard the rumbling of a hundred wheels on the iron tracks. I had a vision of going down on Amtrak to visit my daughter and grandson. Being on SSI due to PTSD and my struggle against alcoholism I did not have money left after paying for a round trip to buy presents. So I put objects I bought at Goodwill and Saint Vinnies in an old suitcase. I had to pay for a hotel near the train station in Santa Rosa, because Patrice Hanson would not let me stay in her home where my offspring and Tyler’s father, Ryan Hunt, were living. She was playing the Big Victim like her ex-husband, Randall Delpiano, who went to San Quintin for impersonating Bob Weir. Randy was a citizen of Marin County.

So as I opened my pathetic suitcase, and presented my pathetic gifts, Stacey Pierrot was having dinner with her wealthy father who was a famous Nip&Tuck doctor in Fresno. Being a amateur’ artist, I’m sure Paul bragged about his daughter being the Savior of the Rosamond Creative and Literary Legacy that Special Executor, Sydney Morris sold to her for the express purpose of increasing a waning interest in my late sister’s art, and thus movie $40,000,000 dollars of prints and lithographs – out the door!

When loyal fans read Tom Snyder’s evil biography that destroys Rosamond the artist, and Christine the sober mother – they were out the door. They were shocked and confused. They wondered why the woman they adored for a decade was rendered a drunken monster who abused children. Worse than that – she abused her gift. To help put another nail in her coffin she invites the man she took to court for abusing her and her art, Ira Cohen (Kaplan) to depict my sister as some kind of Booze Addict who could barely paint, she too drunk to obey her contract, and, she was A Rebel Artist. She rebelled against the Ira Roberts plan that made moderated successes of artists. Stacy artists went along with the plan. How many did not? How many read and heard his offer, and told him to go fuck himself. I am one of the latter. Today, I am going to type out three pages that will make the movie ‘Big Eye’s’ look like a trip to summer camp.

Alcohol Justice went after Gavin Newsom and Plumpjack Wines that is owned by the Getty, Chazen, Newsom, and Pelosi family who are kin to me due to the Marriage of Christopher Wilding, the son of Elizabeth Rosemond Taylor who struggle with her addiction, as did Carrie Fisher. As did Bryan MacLean who dated Christine.

Here is a pic of me taken at a student quad I lived in while I attended the New Hope Program at Serenity Lane. When I graduated, my childhood friend, Nancy Hamren, was there. She got me on bus with Ken Kesey who some say dies of alcoholism. I believe Nancy wanted me to become friends with Ken, and do an intervention. The two men you see are clean and sober today. Michael Dundon and I talked about our late sister in AA, Christine Rosamond Benton. We agreed to let her go to a higher place. That done, I alone set out to bring down those who dragged two creative sibling down into the darkest and deepest slime you can find. Michael and I are responsible for ten children being in the world. Not one gave us a call. Perhaps if the law firm owned by Robert Brevoort Buck sold these two brother’s in AA the Rosamond gallery, then our offspring would think – better of us? Here is Alcohol Justice going over a kid-beer. And, here is my grandson being taught drinking beer is good for Family Unity!

Alcohol Justice has a team of lawyers and when they lost a case, they resorted the SHAMING. I have no money for an attorney, so I will try SHAMING! I am launching an ad campaign to promote my cause. I will make a meme of a drunk toasting my grandson in a bar – months before he died of acute alcoholism. When we met – he refused to shake my hand. There were several dunks in my daughter’s family who looked for way to destroy bonds that were not – PRO THEM!

Maybe the Newsom and Getty Bond will lend me one of their lawyers? 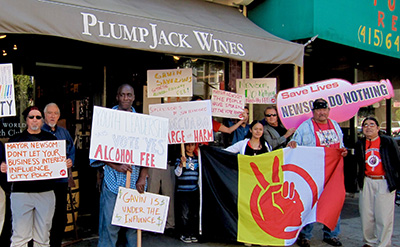 Alcohol prevention advocates are unsure what to expect from the new governor of California, Gavin Newsom. Newsom ran on a platform supporting a single-payer universal health care system. I served on his own Blue Ribbon Health Care Commission which eventually created a partial “universal health care” scheme in San Francisco, so I very much believe he cares for health care. Alcohol-related harm is a major expense for California, to the tune of $14.5 billion annual cost to government.

Binge drinking considered alone – you know, the kind of drinking that occurs at bars late at night – costs the California public $26 billion annually. One would think that alcohol harm prevention is a major way to reduce health care costs.

However, Gavin Newsom built up a fortune for himself in the alcohol industry as the co-founder of Plumpjack Group, before and during his time in politics. Plumpjack manages wine stores, wineries, restaurants, and bars across California. Speaking to the Associated Press, he declared he had no intention of divesting from the group before becoming Governor.

“These are my babies,” Newsom said, referring to the alcohol companies he owns, “my life, my family. I can’t do that. I can’t sell them.”

I think it is a smart and ethical move that Gavin Newsom announced he is putting his Plumpjack holdings into a blind trust. This was reported with great fanfare statewide on December 21, 2018. But he will still own those interests, and he will know that many decisions as governor will affect the return on his “babies”’ investment.

This poses a number of problems for the public health and safety community. As Alcohol Justice regularly documents, California is subject to relentless efforts to make alcohol ubiquitous, heedless of spikes in binge drinking and heavy drinking patterns, as well as an ongoing but ignored spike in deaths from driving while intoxicated (see pg. 13 of link). Deregulation and lack of enforcement are two prominent channels by which this happens. The Governor directly controls both.

During his time in office, Governor Jerry Brown served as an uncritical rubber stamp to the grotesquely ill-conceived “Drybar Bill” to allow free drinks at beauty salons and barber shops. But Governor Brown was also the level-headed backstop against the dangerous and disingenuous 4 a.m. Bar Bill.

Indeed, State Senator Scott Wiener, the author of the last two 4 a.m. Bar Bills, has hurled another 4 a.m. Bar Bill at California in 2019, SB 58. No doubt Senator Wiener expects a better result with the new Governor who together worked the moderate to corporate sides of the political spectrum in SF’s City Hall. Public health advocates received mixed messages from Newsom from his days as Mayor of San Francisco. Although he proved to be an ally to tobacco control, he spearheaded a controversial care program for individuals with alcohol abuse disorder and other addiction or mental health issues, and most disappointingly, single-handedly killed a citywide Charge for Harm alcohol fee, through a veto that was narrowly upheld.

Like all biases, the ones Newsom may carry from the alcohol windfall he has enjoyed does not have to be a conscious one. The Los Angeles Times, after examining his tax records, estimated he made an average of $1.4 million per year outside his Lt. Governor’s salary, over half coming from just one of his wineries. Even as the companies go into a blind trust, every decision the Governor makes will still include thoughts of whether this helps or hurts Gavin Newsom – his pocketbook, his legacy, his actual family, or the business “babies” he says are just as important. A Governor with no alcohol holdings simply would not have that pressure.

Like Sen. Wiener, Big Alcohol undoubtedly sees this conflict as something that can favor them. According to Vote Smart, Newsom received over $370,000 from the beer, wine and liquor industries to fund his 2018 campaign. The E & J Gallo company, a central valley mega-winery with revenues that may exceed $1 billion yearly, was one of his biggest single contributors, maxing out at over $58,000. The alcohol industry does not spend that kind of money if they think overall consumption will drop in the state.

Nonetheless, Newsom assures the AP that “I will do the right thing.” The question is, will he do the right thing for the everyday residents of California – or for his “babies”? Children born with fetal alcohol syndrome are babies too.

So back to the pun in our title: Gov. Newsom, will your wine interests Trump your ethics? President Trump is under suspicion of violating the emoluments clause of the Constitution. Is the President financially gaining from the Trump Hotel on the Capital Mall by sucking in foreign visitor monies? While California’s constitution does not have an emoluments clause, the same conflicts of interest arise. If the 4 a.m. Bar Bill lands on Governor Newsom’s desk, he could gain financially from signing the bill, through wine sales and through the PlumpJack Squaw Valley Inn. Alcohol Justice must directly ask: Governor-elect Gavin Newsom – could you please completely divest from the wine industry and invest in public health? And please do not support any attempts to further gut alcohol regulations which have been deteriorating for decades in California while the body and injury counts rise.

READ MORE about the ongoing alcohol catastrophe in California.

READ MORE about 4 a.m. last calls and their cross-California impact.

1 Response to Challenging The Ethics of Alcohol Justice