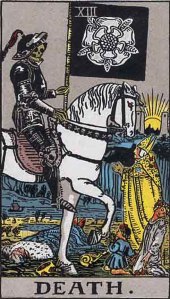 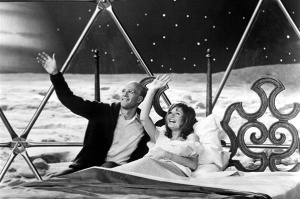 I found a story of young men and women who survived the Black Death and have gathered to talk about a rebirth of ideas.

Two of my facebook friends have inspired me to look into our future and see what is there for us. One is a Dead Head’ is lamenting not able to attend a Grateful Dead Concert due to the coronavirus, and, The other is worried about the future of Roseburg where she sits on the City Council. Two days ago I looked at building a Domed Vortex where the pandemic is kept out so people can live a normal life. Would it do us all good to know there was such a place – where our dreams can go to find rest? Portland ‘Rose City’ is in chaos.

In the story Slaughter House Five, our hero finds himself in a dome on another planet. Seeing he is lonely, the aliens capture the beautiful Montana Wildhack and bring her to Billy Pilgrim.

In the Rock Drama ‘Blows Against The Empire’ Jerry Garcia and Micky Hart play with other famous Rock Stars. Jefferson Starship tried to hire Kurt Vonnegut (who wrote Slaughter House) to play a role, write a chapter about  this Hip New Noah’s Ark. I considered having pot growers fund a Dead Head Zone, a dome in the wilderness that will gather those worth saving, and broadcast a new End of the World Musical that will take survivors to a New World. Won’t they be grateful! With the report that Calif0rnia had the highest number of deaths, tells us all the plans so far – have failed!

Suit up! We are taking off.

Beginning in 1965, Paul Kantner had recorded five studio albums with Jefferson Airplane, but by 1970 internal problems had began taking their toll on the band, including the departure of drummer Spencer Dryden in 1970 and a rift that was forming between founder Marty Balin and the rest of the band that would lead to Balin’s departure in April 1971.[3]

The album was recorded at Pacific High Recording Studios and Wally Heider Recording Studios in San Francisco. The result derives from a period of cross-collaboration during late 1969 through 1971 by a collection of musicians from various San Francisco bands including Jefferson Airplane, the Grateful Dead, and Quicksilver Messenger Service, along with Crosby, Stills, Nash & Young recording at the time in the city. These musicians included Jack Casady, Joey Covington, David Crosby, David Freiberg, Jerry Garcia, Mickey Hart, Paul Kantner, Bill Kreutzmann, Graham Nash, and Grace Slick. Excepting Covington, all of these musicians would also play or sing on Crosby’s debut album recorded at the same time in the same studios. Bassist Harvey Brooks of Electric Flag, and guitarist Peter Kaukonen, brother of Airplane guitarist Jorma Kaukonen, also appear.[5]

In Italy during the time of the Black Death, a group of seven young women and three young men flee from plague-ridden Florence to a deserted villa in the countryside of Fiesole for two weeks. To pass the evenings, each member of the party tells a story each night, except for one day per week for chores, and the holy days during which they do no work at all, resulting in ten nights of storytelling over the course of two weeks. Thus, by the end of the fortnight they have told 100 stories.

Each of the ten characters is charged as King or Queen of the company for one of the ten days in turn. This charge extends to choosing the theme of the stories for that day, and all but two days have topics assigned: examples of the power of fortune; examples of the power of human will; love tales that end tragically; love tales that end happily; clever replies that save the speaker; tricks that women play on men; tricks that people play on each other in general; examples of virtue. Only Dioneo, who usually tells the tenth tale each day, has the right to tell a tale on any topic he wishes, due to his wit.[5][6] Many commentators have argued that Dioneo expresses the views of Boccaccio himself.[7] Each day also includes a short introduction and conclusion to continue the frame of the tales by describing other daily activities besides story-telling. These framing interludes frequently include transcriptions of Italian folk songs.[8] The interactions among tales in a day, or across days, as Boccaccio spins variations and reversals of previous material, forms a whole and not just a collection of stories. The basic plots of the stories include mocking the lust and greed of the clergy; tensions in Italian society between the new wealthy commercial class and noble families; and the perils and adventures of traveling merchants.

A Tale from the Decameron (1916) by John William Waterhouse. 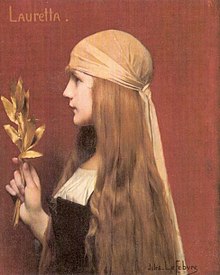 Lauretta, one of the narrators of the Decameron, painted by Jules Joseph Lefebvre

Throughout the Decameron the mercantile ethic prevails and predominates. The commercial and urban values of quick wit, sophistication, and intelligence are treasured, while the vices of stupidity and dullness are cured, or punished. While these traits and values may seem obvious to the modern reader, they were an emerging feature in Europe with the rise of urban centers and a monetized economic system beyond the traditional rural feudal and monastery systems which placed greater value on piety and loyalty.[citation needed]

Beyond the unity provided by the frame narrative, the Decameron provides a unity in philosophical outlook. Throughout runs the common medieval theme of Lady Fortune, and how quickly one can rise and fall through the external influences of the “Wheel of Fortune“. Boccaccio had been educated in the tradition of Dante’s Divine Comedy, which used various levels of allegory to show the connections between the literal events of the story and the Christian message. However, the Decameron uses Dante’s model not to educate the reader but to satirize this method of learning. The Roman Catholic Church, priests, and religious belief become the satirical source of comedy throughout. This was part of a wider historical trend in the aftermath of the Black Death which saw widespread discontent with the church.

Many details of the Decameron are infused with a medieval sense of numerological and mystical significance.[9] For example, it is widely believed[by whom?] that the seven young women are meant to represent the Four Cardinal Virtues (Prudence, Justice, Temperance, and Fortitude) and the Three Theological Virtues (Faith, Hope, and Charity). It is further supposed[by whom?] that the three men represent the classical Greek tripartite division of the soul (Reason, Spirit, and Appetite, see Book IV of Republic). Boccaccio himself notes that the names he gives for these ten characters are in fact pseudonyms chosen as “appropriate to the qualities of each”. The Italian names of the seven women, in the same (most likely significant) order as given in the text, are Pampinea, Fiammetta, Filomena, Emilia, Lauretta, Neifile, and Elissa. The men, in order, are Panfilo, Filostrato, and Dioneo.

1 Response to Dead City – Of Roses