Jesus Was A National Messiah

Jesus was a Nationalist come to save Judea – and not spread a anti-Semitic teaching all over the known world. Jesus was born in a Sukkot Booth and read from the Book of Ruth on the Mount of Olives. The Last Supper was about declaring the land under Herod’s temple belong to him because he descended from Ruth and Boaz. Jesus sent his older brother to pay the Jubilee fee because the land could not be sold – forever! This is why they came and arrested Jesus – and crucified him and his followers! This was later changed by Satan-Paul who claimed the Messiah died for the sins of Pagans so they will know eternal life. He is a liar!

The Sprit of the Lord is upon me, and this Holy Ghost tells me to help restore the stolen lands to the Native Americans. Every document that shows a sale to whites, is now undone. These deeded lands are returned to the true owners.

The Book of Ruth is an important historical work in Hebrew Scripture, our Old Testament of the Bible, as it traces the lineage of King David and ultimately that of the Messiah, Jesus Christ. Ruth was a Moabite woman, whose sense of piety and devotion to her mother-in-law Naomi led to her marriage to the prominent Boaz of Bethlehem in Judah.

The Book of Ruth is read in synagogues on Pentecost, the Feast of the Lord known as the Feast of Weeks or Shavuot – שָׁבוּעוֹת – the Spring Jewish Harvest Festival in the lunar month of Sivan (May or early June). It is the second of five Megillot or Scrolls that are read during the Festivals of the Lord (Leviticus 23) or Jewish Memorial Holidays. See also Song of Songs, Lamentations, Ecclesiastes, and Esther. The Book shows that God’s love is open to both Christian and Gentile, as he blessed the Moabite woman who chose the Lord for her God (1:16), and placed her life under his wing (2:12). Ruth and the lineage of King David in the last lines of the book (4:17-22) are repeated in the genealogy of Jesus Christ in the Gospel of Matthew (1:4-6) in the New Testament of the Bible.

Why Throw Jesus Off A Cliff? 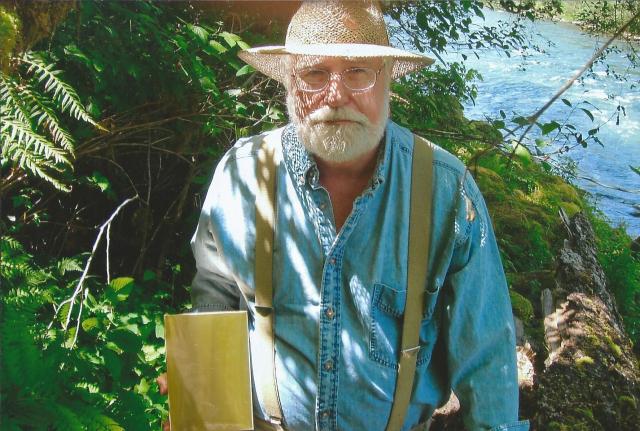 For ten years I have been trying to figure out why they tried to throw Jesus off a cliff. I thought it was because he restored the Jubilee, which he did, but after restoring God’s Clock, he restarted the Count Down to The End of Days, that was going to happen in HIS LIFETIME! This appears to happen in Matthew 27:53, when graves are opened, and the occupants inside, rise and go talk to folks in Jerusalem. What went wrong? Why didn’t the world end? Was only a small section of the world going to end? Roman Slavery was not abolished, was it? Then, here come Saul-Paul with a new teaching.

Luke was written after the Jewish War that got started with the burning of the debt archives. Why elude to Jesus being a part of this? Because, the Jews, and thus God, lost His Abolitionist War with the Roman Slave Masters, and, His alleged Son, failed to bring the world to an end.

When Jesus was dragged to the edge of the cliff, he probably rebuked the crowd, telling them that killing the Messenger will not deter what God wills, and this attempt to do so, rendered them blasphemers!. Makes sense to me! This is ‘The Missing Lesson of Jesus’.

On this day, July 2, I declare all Christian Religions – DEAD! It is finished!

You can thank the evil and twisted teaching of Denish D’Souza for bringing about the end of Christianity, along with the help of the False Messiah of the Jews – who rarely tells the truth! These two have laid the stinkiest brown turd that Satan ever lay on God’s green earth! God hates these two – with a passion! They have played God – with the truth!

14 Jesus returned to Galilee in the power of the Spirit, and news about him spread through the whole countryside. 15 He was teaching in their synagogues, and everyone praised him.

16 He went to Nazareth, where he had been brought up, and on the Sabbath day he went into the synagogue, as was his custom. He stood up to read, 17 and the scroll of the prophet Isaiah was handed to him. Unrolling it, he found the place where it is written:

18 “The Spirit of the Lord is on me,
because he has anointed me
to proclaim good news to the poor.
He has sent me to proclaim freedom for the prisoners
and recovery of sight for the blind,
to set the oppressed free,
19     to proclaim the year of the Lord’s favor.”[f]

20 Then he rolled up the scroll, gave it back to the attendant and sat down. The eyes of everyone in the synagogue were fastened on him. 21 He began by saying to them, “Today this scripture is fulfilled in your hearing.”

22 All spoke well of him and were amazed at the gracious words that came from his lips. “Isn’t this Joseph’s son?” they asked.

23 Jesus said to them, “Surely you will quote this proverb to me: ‘Physician, heal yourself!’ And you will tell me, ‘Do here in your hometown what we have heard that you did in Capernaum.’”

24 “Truly I tell you,” he continued, “no prophet is accepted in his hometown. 25 I assure you that there were many widows in Israel in Elijah’s time, when the sky was shut for three and a half years and there was a severe famine throughout the land. 26 Yet Elijah was not sent to any of them, but to a widow in Zarephath in the region of Sidon. 27 And there were many in Israel with leprosy[g] in the time of Elisha the prophet, yet not one of them was cleansed—only Naaman the Syrian.”

28 All the people in the synagogue were furious when they heard this. 29 They got up, drove him out of the town, and took him to the brow of the hill on which the town was built, in order to throw him off the cliff. 30 But he walked right through the crowd and went on his way.

14 “That terrible day of the Lord is near.
Swiftly it comes—
a day of bitter tears,
a day when even strong men will cry out.
15 It will be a day when the Lord’s anger is poured out—
a day of terrible distress and anguish,
a day of ruin and desolation,
a day of darkness and gloom,
a day of clouds and blackness,
16     a day of trumpet calls and battle cries.
Down go the walled cities
and the strongest battlements!

The Death of Jesus

47 When some of those standing there heard this, they said, “He’s calling Elijah.”

48 Immediately one of them ran and got a sponge. He filled it with wine vinegar, put it on a staff, and offered it to Jesus to drink. 49 The rest said, “Now leave him alone. Let’s see if Elijah comes to save him.”

50 And when Jesus had cried out again in a loud voice, he gave up his spirit.

51 At that moment the curtain of the temple was torn in two from top to bottom. The earth shook, the rocks split 52 and the tombs broke open. The bodies of many holy people who had died were raised to life. 53 They came out of the tombs after Jesus’ resurrection and[e] went into the holy city and appeared to many people.

54 When the centurion and those with him who were guarding Jesus saw the earthquake and all that had happened, they were terrified, and exclaimed, “Surely he was the Son of God!”

Throwing Jesus Off A Cliff 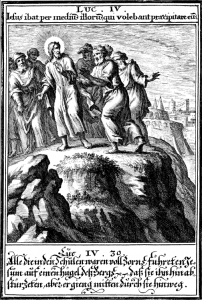 Jesus began a tax rebellion that led to the war with Rome. Jesus was very aware slave economics was destroying the Kingdon of God, and other civilizations that sought Liberty.

The American tax rebellion is funded by the rich so they can aim it at the poor – steer it away from themselves! The rich are expendable – too! They can be replaced.

Below is a post I made a year ago.

I have been asking folks why there was an attempt to throw Jesus off a cliff. There are three possible answers:

1. He was recognized as the Scapegoat worthy of human sacrifice.
2. He had promised to restore the Jubilee in the place of his birth and evict the false landlords from the property of his kinfolk who had become indentured slaves.
3. He promises to save the Gentiles and not the Jews.

“No prophet is accepted in his hometown… There were many in Israel with leprosy in the time of Elisha the prophet, yet only one of them was cleansed-only Naaman the Syrian”. (Luke 4:24, 27).

There has been several attempt to throw my revelations off a cliff.

Total commercialization; everywhere perversities; rebellious youth
1
When the millennium begins, which comes after the millennium
Will gold be in the blood
Who looks at the sky, there are dollars
Whoever steps into the temple, where traders meet
The lenders will be money changers and usurers.
But the fire will smolder
Each city will be a Sodom and Gomorrah
And the children will become a glowing clouds
They will lift the old flags.

Luke 4:21-30 provides us with a glimpse of the ramifications of Jesus’ homecoming to Nazareth. It all begins rather well earlier in the chapter, when Jesus–being filled with the Holy Spirit after his temptations in the wilderness–returns to Galilee and to his hometown of Nazareth. Once there he goes to the Synagogue on the Sabbath day (which, as Luke reminds us, was his custom). While there he exercises the right of every Jewish man to take part in the reading and interpretation of scripture (as an aside, the account given here of Synagogue worship is among the earliest accounts we have). He reads the following passage from Isaiah, saying:
“The Spirit of the Lord is upon me,
because he has anointed me
to bring good news to the poor.
He has sent me to proclaim release to the captives
and recovery of sight to the blind,
to let the oppressed go free,
to proclaim the year of the Lord’s favour.”

In Luke 4, Jesus visited his hometown of Nazareth. He had already achieved considerable local fame, owing to his extraordinary teaching and miracles (4:14). So, when the Sabbath came around, Jesus was invited to read the Scriptures in the synagogue. He selected a passage from chapter 61 of Isaiah, a text that announces the mission of the Messiah. After reading this passage, Jesus sat down, assuming the posture of a teacher. Then he said, “The Scripture you’ve just heard has been fulfilled this very day” (4:21).
At first the people in the synagogue were impressed by what Jesus said. But then he stirred the pot by predicting that he would not be accepted in Nazareth and by connecting his ministry to the actions of the prophets Elijah and Elisha, who healed Gentiles but not their fellow Jews. This angered the synagogue congregation, which drove Jesus to the edge of a hill so as to push him off. Somehow, he managed to escape.
Why did the people in Nazareth spurn Jesus? To put it simply, he failed to meet their expectations. When he refused to do what they wanted, they were quick to reject him. Plus, they were understandably fearful that his messianic message might bring Roman wrath down upon them. Better to get rid of Jesus than to let him mess up their lives!