Look what I just found! I own Great American Permission. I was introduced to the Mayor of Boston after I won my case against the Mafia Tribe. Chief Little Shell is the muse of this seal. He fought for millions of acres in Montana where my battle with Rena Easton began. This is EPIC!

The Reverend Wilson saved the life of a young English maid who has been kidnapped by a Piguot Terrorist. He tells a man with a gun to aim it, and kill that Indian, as they were called in Hollywood. This is Liz Taylor’s great grandfather, too!

“Continued attacks and murders roused Connecticut to action. “All through the winter of 1636-37 the Connecticut towns were kept in a state of alarm by the savages. Men going to their work were killed and horribly mangled. A Wethersfield man was kidnapped and roasted alive. Emboldened by the success of this feat, the Pequots attacked Wethersfield, massacred ten people, and carried away two girls.”[6] To help bring spiritual aid, Boston had declared a Fast Day on January 19, 1637, recognizing the “dangers of those at Connecticut.”[7]

Cotton Mather records this event during this frightening time:

A Pequot-Indian, in a canoo, was espied by the English, within gunshot, carrying away an English maid, with a design to destroy her or abuse her. The soldiers fearing to kill the maid if they shot at the Indian, asked Mr. [Rev. John] Wilson’s counsel, who forbad them to fear, and assured them “God will direct the bullet!” They shot accordingly; and killed the Indian, though then moving swiftly upon the water, and saved the maid free from all harm whatever.[8]

Little Shell attempted to sell his remaining lands for $1.00 per acre and be allowed to have at least 10,000,000 acres (40,000 km2) of remaining lands in Montana, North Dakota and South Dakota set aside as a Reservation. The Americans offered to pay 10 cents an acre (which became known as the infamous “Ten-Cent Treaty”[1]) and refused to set aside the 10,000,000 acres (40,000 km2) reservation. No agreement was reached. The United States agent brought in 32 other Chippewa leaders who signed the treaty.[citation needed]

Little Shell’s Montana lands started at the Missouri River on the Montana-North Dakota border, then followed the Yellowstone river to its beginning, and probably included the Big Belt Mountains and Little Belt Mountains, and may have reached to the Rocky Mountains near Augusta. Of course, the plains Anishinaabeg shared their Montana lands with the Assiniboine and probably the Gros Ventre, as well.[citation needed]

From Wikipedia, the free encyclopedia
(Redirected from Great Seal of Massachusetts) 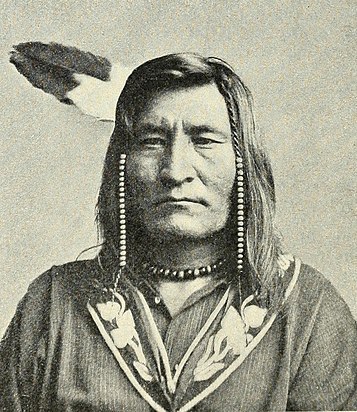 Clockwise from top-left: the first seal of the Massachusetts Bay Colony with a crude portrayal of a Native with his arrow pointed in a gesture of peace, the 1775 revolutionary seal featuring the motto and armed sword which would appear disembodied upon the crest, and Little Shell, the Ojibwe chief who was model for the present-day seal.[2]

The seal was adopted by the Provincial Congress on December 13, 1780. The shield depicts an “Indian” with bow and arrow; the arrow is pointed downward, signifying peace. A silver star with five points appears next to the figure’s head, although this is represented as white on the flag. A blue ribbon (blue, signifying the Blue Hills of Quincy, Canton and Milton) surrounds the shield, bearing the state motto “Ense petit placidam sub libertate quietem” This comes from the Book of Mottoes in the Royal Danish Library in Copenhagen, Denmark; written about 1659 by Algernon Sydney, English soldier and politician. It was adopted in 1775 by the Provincial Congress and the literal translation is, “With a sword, she seeks quiet peace under liberty.” Although the looser English translation more commonly used is, “By the sword we seek peace, but peace only under liberty.” Above the shield is the state military crest: a bent arm holding a broadsword aloft. The sword has its blade up, to remind that it was through the American Revolution that independence was won.

There have been a number of Seals of Massachusetts throughout history. The first seal of Massachusetts Bay Colony showed a nude American Indian with a bush covering his groin. Like the current seal, he held in his hand an arrow pointed down. A scroll came out over his mouth with the words “Come over and help us”, emphasizing the missionary and commercial intentions of the original colonists. This legend coming from the Indian’s mouth may originate with Acts 16:9: “And a vision appeared to Paul in the night; There stood a man of Macedonia, and prayed him, saying, Come over into Macedonia, and help us.” (Authorized Version).[4] This seal was used until 1686, shortly after the charter was annulled, and again from 1689-1692.

In 1775 the Revolutionary seal appeared, depicting a minuteman with a sword in his right hand and the magna carta in his left; following the Revolutionary War, the sword would later be incorporated into the crest of the traditional coat of arms. The Revolutionary seal would also mark the first time the Latin motto used by the state today appeared on a state seal, and meant that the colony no longer recognized the authority of the Royal Governor General Thomas Gage. The source is attributed to the letter written by a father of an English soldier and politician Algernon Sidney: “It is said that the University of Copenhagen brought their album unto you, desiring you to write something therein; and that you did scribere in albo these words: ‘Manus haec inimica tyrannis ense petit placidam sub libertate quietem'”. (Translated, this means “This hand of mine, which is hostile to tyrants, seeks by the sword quiet peace under liberty.”) The last words were then written in Sidney’s “Book of Mottoes”, particularly favored by some in the American colonies. Metrically, the motto is dactylic hexameter.

A stained glass window at the top of the Grand Staircase at the State House shows all the seals used in Massachusetts, including the royal seals of the Governors during colonial days.

2 Responses to Seal of Massachussets