The President of the Czech Republic has accused Erdogan of War Crimes. His nation has an agreement to come to the aid of the Kurds. McConnell has condemned Trump’s Blunder. Contact these leaders and tell them you want to see a United Effort to save the Kurds.

Czech President Miloš Zeman said that Europe and America “vulgarly” betrayed the Kurds who fought in Syria with the ISIS terrorist organization.

“In general, the Kurds were betrayed elementarily and simply. America betrayed them, Europe betrayed them. They were respected when they had to fight against ISIS, and now they are simply abandoned. At the same time, we (the Czechs), as a nation that was betrayed in a similar way in 1938 (by its allies – France and Great Britain), should express at least elementary solidarity with the Kurds and help them as much as we can “- Zeman emphasized, appearing on Thursday in the evening on TV Barrandov.

According to the Czech leader, it was the Kurds’ armed forces that were the most effective force in the fight against PI. “On the contrary, I have already mentioned that Turkey de facto financed the Islamic State by buying oil from it,” added the Czech president. “In my opinion, Turkey is committing war crimes in Syria and should not become a member of the European Union,” said Zeman.

The new sense of license to criticize Trump among military leaders originated with the president’s highly contentious decision last week to pull US troops from northern Syria. The sudden move has paved the way for a Turkish invasion that has put a prominent US ally in the fight against Isis, the Syrian Kurds, in mortal danger.

Several US generals and admirals expressed their disgust and bewilderment at Trump’s decision. Adm James Stavridis, former supreme allied commander of Nato, told MSNBC that it was a “geopolitical mistake of near epic proportion”. He said its long-term impact would be to cast doubt on the reliability of the US as an ally.

“It’s hard to imagine how one could, in a single stroke, re-enable Isis, elevate Iran, allow Vladimir Putin the puppet master to continue his upward trajectory and simultaneously put war criminal chemical-weapon user Bashar al-Assad in the driving seat in Syria.”

On the same channel, the former four-star general and battlefield commander in the Gulf, Barry McCaffrey, said the Syrian withdrawal was “inexplicable”.

“Mr Trump seems to have single-handedly and unilaterally precipitated a national security crisis in the Middle East,” he said, adding that the president had put the armed forces in a “very tricky situation”.

by Naharnet Newsdesk 10 hours ago

Czech President Milos Zeman has accused fellow NATO member Turkey of teaming up with terrorists during its offensive in northeastern Syria and of committing war crimes.

“On the contrary, I’m asking myself if those who attack the Kurds and commit those beastly murders like the murder of that Kurdish politician are not terrorists themselves.”

Zeman was referring to the summary execution of female politician Hevrin Khalaf reportedly by Turkey’s Syrian allies during the operation launched on October 9 to remove the Kurdish People’s Protection Units (YPG) from areas near its border.

The outspoken veteran leftwinger, who is known for his pro-Russian, pro-Chinese, anti-Muslim views, also said Turkey was building close ties “with Islamism, with the radical, murderous Islamism we have now seen in northeastern Syria.”

“I think Turkey has committed war crimes and in any case I think it should not be an EU member at least.”

The Czech Republic, like a number of other EU members, has halted arms exports to Turkey, and its lawmakers have branded the Turkish offensive in Syria a breach of international law.

Zeman also criticized the United States and the EU for having betrayed the Kurds, who helped them fight the self-proclaimed Islamic State.

“We honored them when we needed them to fight the Islamic State and now we have let them down,” Zeman said, drawing a parallel with the 1938 betrayal of the former Czechoslovakia by Western allies in the run-up to World War II.

Turkey has now announced a 120-hour suspension of its offensive following a deal with US Vice President Mike Pence, calling on the Kurds to withdraw from a border strip which will become a “safe zone”.

Four-star US generals and admirals are a taciturn bunch: they measure their words, qualify their statements and guard their silence out of loyalty to the armed forces and to their country. 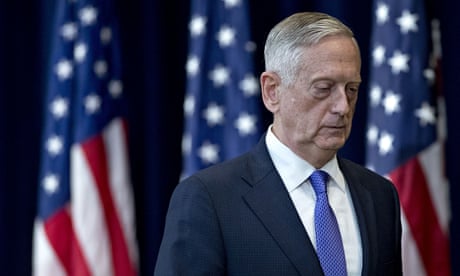 Mattis resignation triggered by phone call between Trump and Erdoğan

A torrent of raw military condemnation has been unleashed on Donald Trump, with some of the most respected figures among retired military leaders lining up to express their profound disapproval of their commander-in-chief.

The outpouring was exceptional, both for the sheer number who unloaded on the president and for the unrestrained language in which they put it. The most breathtaking words came from William McRaven, a former commander of US special operations command who oversaw the 2011 raid that killed Osama bin Laden.

In an opinion article in the New York Times, McRaven accused Trump of spreading “frustration, humiliation, anger and fear” through the armed forces and of championing “despots and strongmen” while abandoning US allies. The four-star admiral called for Trump to either shape up or ship out of the White House.

“If this president doesn’t demonstrate the leadership that America needs, both domestically and abroad, then it is time for a new person in the Oval Office – Republican, Democrat or independent – the sooner, the better. The fate of our Republic depends upon it.”

That Trump should be coming under such sharp criticism from figures as revered as McRaven is all the more extraordinary given that Trump put those he called “my generals” at the center of his cabinet when he took office almost three years ago. He appointed Jim Mattis as defense secretary, Michael Flynn and HR McMaster as successive national security advisers, and John Kelly as homeland security secretary and then White House chief of staff.

Now all those generals are gone, and some are speaking out.

Mattis, who has largely kept his silence since resigning last December, made clear his disdain for the president in the form of a stream of jokes at a black-tie roasting on Thursday night. In his first public comments about his former boss, Mattis mocked the amount of time Trump spends on his golf courses and poked fun at how he had avoided military service in Vietnam by claiming bone spurs in his feet.

“I earned my spurs on the battlefield; Donald Trump earned his spurs in a letter from a doctor,” Mattis said.

The new sense of license to criticize Trump among military leaders originated with the president’s highly contentious decision last week to pull US troops from northern Syria. The sudden move has paved the way for a Turkish invasion that has put a prominent US ally in the fight against Isis, the Syrian Kurds, in mortal danger.

1 Response to Czechs and McConnell