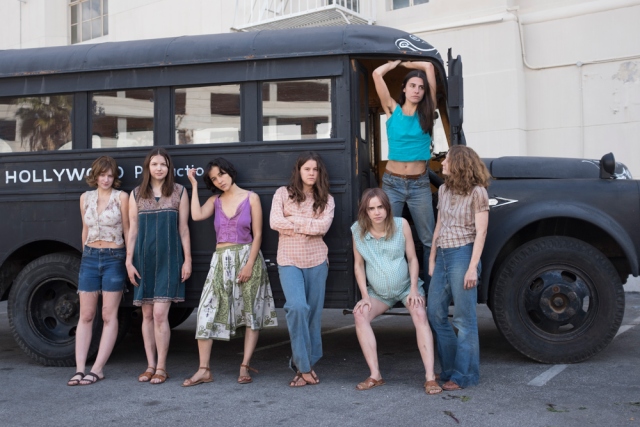 I posted this July 20, 2015. Joan Corbett is in this post. My female tormenters zero in on the truth I spend much time alone. Charles Manson was not a recluse and loner. Tom and my ex lived in the appartment below.

Mary Ann hated hotels and motels so we spent the night in Marilyn Reed’s bed. M spent a lot of time at the Moonfire Ranch. Mary Ann wore a Train Dress she designed, that Debbie Boone wore.  Not everyone becomes a Star. Tarantino explores this in his latest violent movie. The Manson Family wanted to be in a movie – that would change the world! Two shooters have killed nearly thirty people in the last 24 hours. America may be moving into an era of Death Cults.

Mary Ann is in my family tree, and thus is kin to Mel Lyman who married Jessie Benton the daughter of the famous artist, Thomas Hart Benton, Garth Benton’s cousin, whose grandfather was the Senator of the same name, whos name was removed by OSU President, after un-named Latinos picketed for a week, that were targets of a shooters Manifesto. It’s a small world…………of celebrities and their families!

– Rock journalist/author, Barney Hoskyns, revealed
in his book, Arthur Lee: Alone Again Or (2001),
that Manson family member Bobby Beausoleil played
rhythm guitar for the rock group Love briefly in
1965, when they were named The Grass Roots.

During a very strange interview in 1992, Lee told me: “We were competing a bit like Lennon and McCartney to see who would come up with the better song. It was part of our charm. Everybody had different behaviour patterns. Eventually, the others couldn’t cut it.” Lee sacked the rest of the band and assumed the Love mantle from mid-1968. He briefly worked with Jimi Hendrix and nearly died of a drug overdose in 1970.
MacLean also fell from grace. “I don’t think I could cope with even the minimal amount of fame that I experienced. It was difficult to stay balanced. To be honest, it almost killed me just to have the notoriety that I had. To have my face more well-known would have been pathogenic. I don’t know if I could have lived through it,” he later admitted.

Canned Heat’s drummer, Fito de la Parra, revealed
–in his book, Living the Blues–that Morrison was
friends with Alan Wilson, one of Canned Heat’s
founding members, rhythm guitarist, harmonica
player, and vocalist.(1) On September 3, 1970,
Wilson was found dead in a sleeping bag near the
home of fellow band member, Bob “the Bear” Hite,
in Topanga Canyon, L.A.(2) Wilson was living with
Hite at the time of his death. De la Parra further
claims Hite (also deceased) boasted of “knowing
Manson family members.”(3) It is quite possible
–given the location of Hite’s home in Topanga
Canyon–that Hite did in fact meet members of the
Manson family at the Spiral Staircase, the Satanic
house in Topanga Canyon where Manson and his family
members once spent a lot of time. And since Morrison
was friends with Hite’s house mate, Alan Wilson, it
is quite possible that Morrison and Wilson may have
accompanied Hite to the Spiral Staircase at some
point where Morrison may have met Manson. In
addition, Morrison had bought his longtime
girlfriend, Pamela Courson, a cottage in Topanga.(4)
So he was geographically close to the Spiral
Staircase through Courson as well as Bob Hite
and Alan Wilson.

– Rock journalist/author, Barney Hoskyns, revealed
in his book, Arthur Lee: Alone Again Or (2001),
that Manson family member Bobby Beausoleil played
rhythm guitar for the rock group Love briefly in
1965, when they were named The Grass Roots.(5)
(Different band than the Grass Roots that had
several hits in the late Sixties.) Beausoleil was
later convicted of murdering Gary Hinman. Morrison
was friends with Love’s founder, Arthur Lee. In
fact, Lee encouraged Elektra Records’ founder and
president, Jac Holzman, to sign the Doors. (6)
Beausoleil claims he remained on good terms with
Lee after leaving Love. (Beausoleil was replaced
by Bryan Maclean because Maclean had been a roadie
for the Byrds and had lots of connections in the
LA music scene through the renowned rock group.)
Beausoleil claims Lee renamed the group Love, in
honor of Beausoleil, because his nickname was
Cupid.(7) Surprisingly, Vincent Bugliosi
corroborated that Beausoleil’s nickname was in
fact Cupid in Bugliosi’s famous book, Helter
Skelter: The True Story of the Manson Murders.(8)
Given that Beausoleil and Lee apparently remained
friends after parting ways musically, and given
that Morrison was also friends with Lee, and given
that Beausoleil was a member of Charlie Manson’s
renowned “family”, it is quite possible that Manson
met Morrison through the Lee/Beausoleil connection.

This isn’t a book review. It’s my response as a woman to reading all the gossip about Charles Manson and Mel Lyman. And, more than that, a response to the whole of hippie / freak culture and the “place” of women in it. I mean, it may be total drag to spend your life at the dishwasher, washing machine, supermarket etc, — and of course we know that — on the other hand it’s not exactly a groove to hustle on the street, bake bread for your hippie farmer, serve the God incarnate, commit murders: to name a few options.

Sanders can say “in his universe women had no soul. They were to be slaves of Man” (p. 198), he doesn’t see that Manson is not a universe unto himself. Shocked as I am by the particular viciousness of Manson’s treatment of freak women (or by Calley’s and other Gl’s torture of Vietnamese), I’m not really surprised. Nor am I at a loss to understand why women take it. When I was 21 I had a boyfriend who reminds me of Manson and Lyman in more ways than I care to remember, and I still carry with me the fear that I, like Susan Atkins, etc., could be dominated by some man.

You see, Ed Sanders is stuck with the idea that Manson is some kind of evil genius. Or that he was under the influence of various evil cults — like the Process or other obscure California Satanists. But satanists are, just as Manson is, the symptoms of a diseased culture, not its causes. To use them to explain him is like using the Hell’s Angels to explain Altamont.

Sanders’ horror at Manson is a relief after the initial response to all the trial publicity, which led people to feel protective of him as a “freak like us.” In fact, certain sectors of the Left, grooving out on his offing some rich white people, were big apologists for Manson; and Stew Albert, one of the original Yippie leaders, (writing, thank God, in the New University Review where not too many people will read him), still sees Manson as a “real victim,” totally ignoring the ways he victimized women.

Many sexual encounters in Thomas Pynchon’s fiction have occurred beyond the mainstream, generating theatres of perversity which dramatise the death wish and enact power relations from wider arenas. However, in Inherent Vice they change in nature. With the exception of scenes which use Charles Manson to fuel fantasies of domination and submission, they have lost their transgressive bite. Instead, the sheer profusion of variations, and the insouciance with which they are greeted, evinces the influence of a sexualised mainstream colonised by hardcore pornography. Paradoxically, much hardcore catering to the mass market is appreciably less transgressive than Pynchon’s fiction has been. The narrative of his seventh novel, with its noir conventions and accompanying sexual motivation, is driven by the commissions his detective protagonist receives from femmes fatales and damsels in distress. The transference of these women from man to man becomes the novel’s sexual currency. 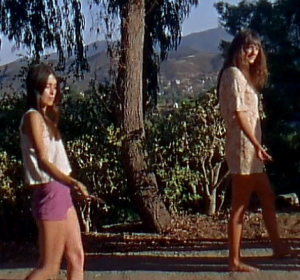 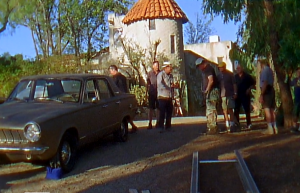 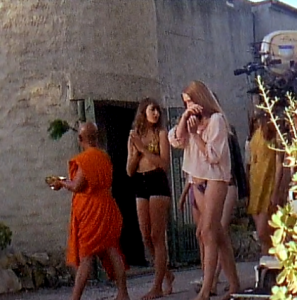 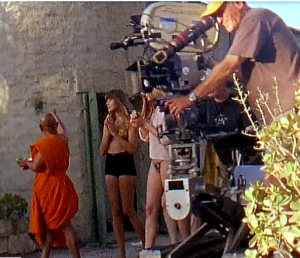 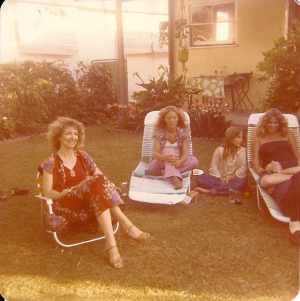 I captured these long-legged Rena types from this video. In reality, the only gathering of beautiful hippie chicks happened when I wed Mary Ann Tharaldsen, who was married to Pynchon. We got married in Topanga Canyon where this scene was shot. Bryan Maclean sang. He and the rock group ‘Love’ lived in a castle in LA.

Marilyn is wearing a red dress she made, and lived in Latigo Canyon. She and her friend Maggie Thrett partied at John Phillip’s house and conversed with his daughter, Michele. M was a Buddhist, and I a follower of Meher Baba. A monk is blessing the shoot.

My brother-in-law, Rick Partlow, is off camera. His childhood friend, Lana Clarkson, was murdered by Phil Spector (who lived in a castle) in a case of real vice, and real bad vibes!

“Cue the Buddhist – and his long-legged Babes!”

I think they should have made ‘Daughters of the…