Several days ago I told Marilyn about Wilmot Collins, and his first name is Whylie, or, Willy. I said Wilot might be the manifestation of a African Charismatic, like Fela, whom her sister knew and wrote about.

“That he would appear in Montana, where Rena is hiding out with her Cowboy-Rancher on a hill, is profound. Of course he would come to America where fellow Africans were taken against their will and number in the tens of millions. I belong to Shembe’s Zulu-Nazarite church. He said he was the embodiment of Elijah, like John the Baptist. You know I have been looking at the possibility the Nazarites were once black, their original teacher older than the Pyramids.”

In authoring my book ‘Bonds With Angels – The Arrest of Jesus’ I have been considering the idea Melchizedek was a black charismatic, and King of the Cannanites who were allegedly black. Scholars of the Torah are struggling with the Genesis of the Jewish People who fled to a strange land in order to find freedom from slavery, and a sanctuary for their BELIEF system. The  flight from Egypt is now considered a myth. However, this folk tale might have belonged to Cannanites, and even the Scythians. I have looked at the Minoans, who were taken captive when they invaded Egypt. Then, there is the story of Ham. Was Moses, black? He married a black woman. This is one of the most perplexing and tantalizing riddles known to human kind. In speaking about his own flight to freedom as a refugee, we are getting hands-on answers. We are out of the lab! We are a nation of refugees who fled to America because we were persuted for our beliefs.

When Rena Easton said I was left-leaning, then, The Midland (Bozeman) Art Festival was on. From what backward heehaw hot spot did that remark come from? My Rosamond ancestors owned slaves in South Carolina and I believe did come in contact with Shaman Kings who were taken out of Africa. I believe Wilmot Collins is a Shaman King come to America to be with his people who taught my people how to do The Happy Chicken Dance that was passed down to me through my DNA.

“The novel is critical of American society and its treatment of its citizens, many of which Vonnegut writes “were so ignored and cheated and insulted that they thought they might be in the wrong country.” He focuses largely on race, the poor, and the destruction of the environment, criticizing the hypocrisy of a land that claims to be based on the principles of freedom having been founded by people who “used human beings for machinery, and, even after slavery was eliminated, because it was so embarrassing, they and their descendants continued to think of ordinary human beings as machines.” The incidents in the life of Wayne Hoobler, a black resident of Midland City, are frequently contrasted with those of the similarly named Dwayne Hoover, emphasizing the aforementioned impact of race.”

Recorded in many spelling forms including Wilmot, Willmot, Wilmott, Willmett, Willmetts, Willimott and Wilmut, this is an English surname of Germanic pre 7th century origins. It is a diminutive of the personal name “Wilhelm”, plus the diminutive suffix ‘et(t) or “ot(t)” meaning ‘little’ or possibly ‘son of’. Wilhelm, the Germanic form of William, is composed of the elements “wil” meaning “strength of mind”, plus “helm”, meaning “protection”. It was first introduced into England and Scotland by the Norman-French after the Conquest of 1066 as “Willelmi”.
Read more: https://www.surnamedb.com/Surname/Wilmot#ixzz5udEkPB6b

A recent parolee from the Adult Correctional Institution at Shepherdstown and a direct descendant of Josephus Hoobler. Wayne represents the stereotypical black criminal who becomes institutionalized because his racist society assumes that since he is a black man, he belongs behind bars. From orphanages to juvenile homes and prisons, Wayne has grown accustomed to living in “cages,” so much so that he “misses the clash of steel doors” after he is released from prison. Wayne thinks that Earth is “terrible,” and he has only a “feeble will to survive.” His life’s ambition is to work for Dwayne Hoover, whose advertisements he has seen and heard time and time again. Wayne dreams of “a better world,” or “Fairy Land,” free from the racism and oppression of American society. He serves as a sort of foil to Dwayne Hoover, who because of his white skin, enjoys privileges otherwise denied to Wayne. Dwayne and Wayne have practically the same name and come from practically the same place, their only difference is how society views and accepts them. Wayne Hoobler underscores the mass incarceration of black men in American society, but he also emphasizes the novel’s central argument that “white robots are just like black robots, in that they are programmed to be whatever they are, to do whatever they do.”

In response, the Billings Gazette chastised Daines in an editorial, saying, “Montanans are more sickened by the never-ending torrent of childish, bigoted views that are shoveled from the White House that make the country look like bigots and idiots. And we’re nauseous when folks like Daines invoke our state in defending a spoiled New York developer who would get tongue-lashed by most Montanans for the way he takes to Twitter.”

While Lloyd Barrus made Facebook postings suggesting government excesses at Ruby Ridge and Waco and showing armed Oath Keepers with a private helicopter, his son Marshall Barrus has a criminal record.”

The Oath Keepers, headed by Stewart Rhodes, is an armed Patriot group whose members claim to be ex-military and police officers whose primary purpose is to defend the Constitution. It’s not clear, at this point, if Barrus is a member of Oath Keepers, but he has posted several social media pictures suggesting a possible past connection with the military.

In April, close to the birthday of Adolf Hitler, Barrus posted a picture of Nazi Germany with the caption: “No Rioting going on in this picture.” 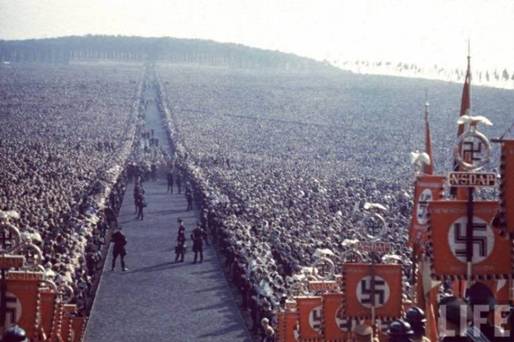 The picture is from suspect’s Lloyd Barrus’ Facebook page in April, shortly after Adolf Hitler’s birthday. The caption Barrus posted says:
“No Rioting going on in this picture.”

In another post from last October, Barrus said, “The FBI & ATF killed more children at Waco then were killed at Sandy Hook. Where was the outrage then?”

Here are two prophetic posts I made that predicted the political and cultural showdown that took place in Bozeman Montana. I looked at my muse, and into the future. It has been alleged artists have owned the ability to do this for thousands of years. Alas, the proof arrives. This proof is very valuable to all artists.

Rena is has been capable of extreme cruelty. This aspect of women is oppressed. After it was revealed that the president of the United States deliberately walked in on young naked beauty contestants, and millions of women still voted for him, demands a motive be sought, for all of human culture is attacked by this Beast and the beautiful women who adore him, even worship him.

The relationship I have with my muse can be depicted in many medias. A play, ballet, or a musical would captivate many audiences. Our drama will explore the idea no woman is capable of love. Rena entertained this possibility that is the landscape she roams upon, like a thoroughbred horse. And in a horse, there is a rose………..the Fifth Rose! Can you see it? Can you find it?

“Do you think there is a Cultural Shootout coming, between me and my Muse, at the ‘I’m O.K. You’re O.K. Coral’? I think this is exciting as all hell!”

1 Response to Wilmot – A Black Shaman King and Charismatic