Mobs feel emboldened to hurt people. This is the case with Alley Valkyrie, Belle Burch, and Kim Haffner.

One reason Belle may not have wanted to be photographed, is she was in violent anarchist demonstration in Portland and the police were trying to identify her.

He has every right as a citizen and as a journalist to exercise his First Amendment right to report and to comment freedom of the press and not be assaulted,” said Dhillon.

Ngo posted pictures of his injuries and says in addition to the bruises you can see, he also has a brain hemorrhage.

“I have that physical pain and I’m dealing now with the emotional trauma of it as I’m recalling this event,” said Ngo.

“As a journalist I’ve written critically about Antifa’s criminal activities in the city and for that I’ve been threatened and intimidated and doxed multiple times all of which have been reported to police and as far as I know no action has been taken,” he explained.

Ngo says right before leaving his home he took off his helmet so as not to appear armed for a battle.

“My mistake was leaving that helmet at home because they went primarily for my head,” said Ngo.

Ngo’s attorney says her top priority is making sure the people responsible are properly criminally prosecuted. She says civil litigation is likely to follow.

Two Sundays ago, the Portland Mercury reporter Kelly Kenoyer, 24, went downtown to cover a violent street protest. It was the first such protest she had worked as a journalist – Kenoyer didn’t begin her career until after the election of Donald Trump.

Within minutes, she was being shoved and manhandled by a masked man aligned with the rightwing Patriot Prayer group. 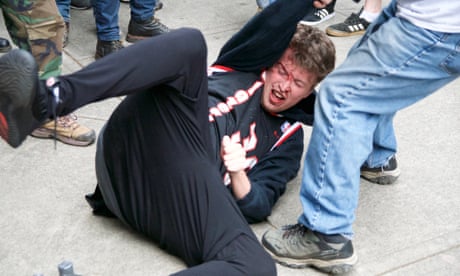 “I got close to record the argument he was having with [a] counter-protester and he stuck his middle finger up in front of the camera,” Kenoyer says, “then shoved me sideways with the same arm.”

A bystander intervened on Kenoyer’s behalf, and he in turn was threatened by another Patriot Prayer protester. Then “someone shoved him into me and I fell backwards”, Kenoyer says.

Kenoyer was shaken by the incident, but after a few minutes she steeled herself to continue her coverage.

Soon after, she narrowly dodged a rock during an exchange of missiles on Portland’s waterfront. Both sides – rightwing activists and leftwing counter-protesters – were hurling stones and bottles, but the rock that hurtled by her came from where the rightwing group was. 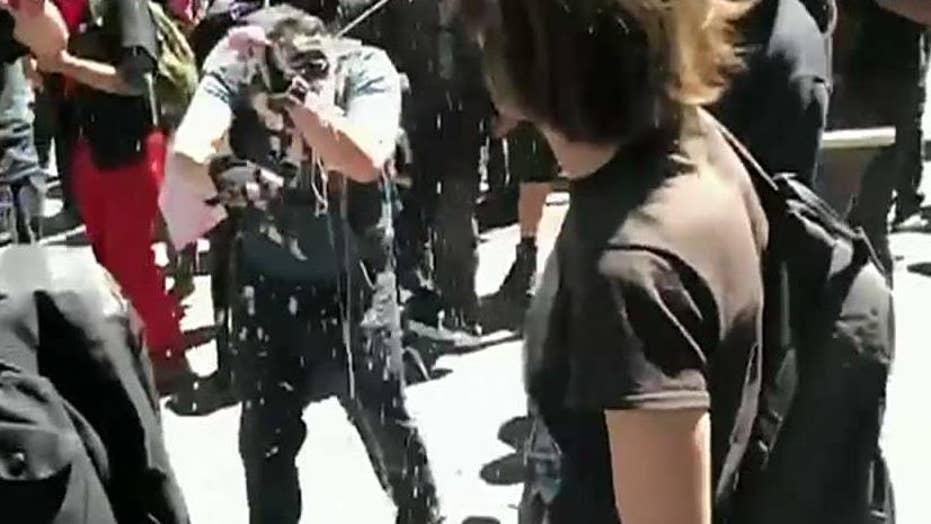 Fallout from assault on conservative journalist in Portland, Oregon.

Authorities in Portland, Ore., are calling for a series of laws to curb violent clashes at demonstrations that include prohibiting masks worn by protesters, allowing police to videotape demonstrations and giving the city greater control over events organized by groups with violent histories.

“We cannot allow people to continue to use the guise of free speech to commit a crime,’’ police Chief Danielle Outlaw said in a Wednesday news conference addressing last week’s violence that occurred when three competing demonstrations converged downtown.

“We cannot allow people to continue to use the guise of free speech to commit a crime.’’

Several people were injured in connection with demonstrations as marchers with an anti-fascist group clashed with conservative protesters with the Proud Boys and supporters of the #HimToo movement. Conservative writer Andy Ngo was assaulted by Antifa members and spent the night in an emergency room. 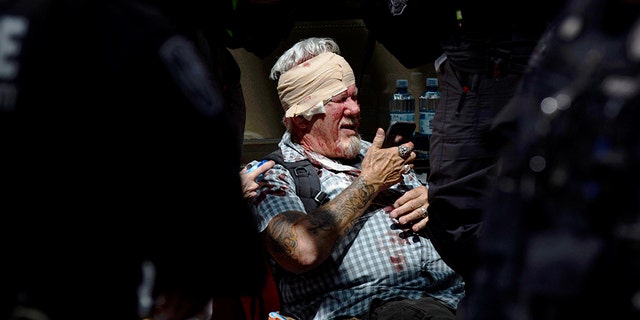 A man checks his phone while surrounded by police and medics after being injured during a civil disturbance in Portland, Ore., on Saturday, June 29, 2019. (Associated Press)

About 15 states and some countries have anti-mask laws, the Oregonian reported. Opponents argue such laws would deprive people anonymity to express their views and would violate their First Amendment rights.

“We looked into it previously and the constitutional free speech issues are difficult to overcome, at least in Oregon, said Tim Crail, chief of staff for Portland Commissioner Amanda Fritz.

Outlaw said the issue was a matter of public safety. Portland has been the site of several violent demonstrations between Antifa supporters and conservative demonstrators in recent months.

Ngo, who covered Antifa for the website Quillette, was kicked in the head and had objects thrown at him.

“A lot of people are emboldened because they know they can’t be identified,’’ Outlaw said.

“A lot of people are emboldened because they know they can’t be identified.’’

The American Civil Liberties Union of Oregon said it doubts a policy prohibiting masks could be enforced in a constitutional manner.

“A policy that prohibits wearing a mask to a protest will have police focusing on the wrong issue,” Sarah Armstrong, a spokeswoman for the group, told the paper. “Behavior is the issue, not the mask,” she said. “It could be argued that the mask is an important symbolic part of a protester’s message. …  There are many legitimate reasons people wear ‘masks,’ including political and religious reasons.”