Benton In The National Statuary Hall

My kindred, Thomas Hart Benton, is in Hall of Statuary located in the United States Capitol! What an honor! Benton is not alone. There are many prominent white men being honored, who were chosen by other white men to stand out for their achevements. No native tribe in Oregon was chosen to vote on ‘The Winners’.  Black folks were not chosen to be on the naming committee. Were any Satanists consulted? Perhaps this ART and ARCHITECTURE inspired Benton to believe white Americans should go West and rule all of America, and even go to China that is famous for the their building skills

What Ed Ray and his History Hexmen contend, is that white men came to America in order to look down on the indigenous peoples, and feel that much prouder! Making beautiful works of art, and building beautiful buildings – was not enough! So whitey brought some Africans so they could look down on them – and really feel superior! Has any modern black man or woman asked why there is a Roman façade on our government buildings? Plantations had this façade.

Above is a painting done by the artist, Thomas Hart Benton, the grandnephew of the Senator. Black anarchist want this image painting over because they claim it honors the KKK. Note the black child in the hospital being healed by white people. Benton is honoring the improvement Missouri has made on how they treat blacks. In the capitol mural, Benton depicts white men lynching a black man. Several Missouri politicians wanted the whole mural painted over. To render the KKK going out of the mural, out of the picture into the darkness they sprang from -with their backs to the viewer, says;

“Every dog has their day!”

Above are two images of Satanists unveiling a statue in front of the Missouri capitol where Benton served five terms. Below is a video of ISIS smashing statues. Also, why is the FOREIGNER, Kukucin, being honored with a statue? Is he someone’s relative, perhaps a prized donor? How many members of Ed Ray’s Renaming Cult have had a art lesson. How many could tell you where the National Capitol is located? How many would not understand the question?

I founded my newspaper in order to protect the arts. I am trying not to call the ISIS haters of art ‘Ignorant Savages’. How about this name for haters of art…………..

What do you call a person of color who hates everything about the white man?

Here is the fake artist, Kenhinde Wylie, defiling works of art rendered by whites. He is a

How can you STOP the stupidly? Going to Ed Ray’s college, won’t do it! The people in the photo below lack a sense of humor. I suggest a new Art Product, called………

Whenever an offensive image of President Trump appears on your T.V. screen, reach for a box of Blackout Silhouettes, and place them over the obscenity. We got Trump playing golf, Trump hugging Putin, and, Trump with a woman he wants to grab – you know where!

This was the chant: “These racist buildings have got to go!”

The students, calling themselves “Organized to Revolution,” are trying to call attention to four campus buildings they believe are named after racists. The group’s goal is to get Arnold Dining Center, Avery Lodge, Benton Hall and Gill Coliseum renamed.

The students declined to identify themselves by name when approached by a Gazette-Times reporter, but one of them said: “We are using trying to get rid of building names as a way to draw attention to issues of students of color on campus.”

Initially, they have targeted four buildings on campus for a variety of reasons. (See the related story on A4 for details about all four buildings.)

The National Statuary Hall Collection is comprised of statues donated by individual states to honor persons notable in their history.

The entire collection consists of 100 statues contributed by 50 states, two statues each.

View all statues in this collection or view the list by location in the Capitol.

The concept of a National Statuary Hall area of the U.S. Capitol originated in the middle 19th century, even before the completion of the present House wing in 1857. At that time, the House of Representatives moved into its new larger chamber and the old vacant chamber became a thoroughfare between the Rotunda and the House wing. Suggestions for the use of the chamber were made as early as 1853 by Gouverneur Kemble, a former member of the House, who pressed for its use as a gallery of historical paintings. The space between the columns seemed too limited for this purpose, but it was well suited for the display of busts and statuary.

On April 19, 1864, Representative Justin S. Morrill asked: “To what end more useful or grand, and at the same time simple and inexpensive, can we devote it [the Chamber] than to ordain that it shall be set apart for the reception of such statuary as each State shall elect to be deserving of in this lasting commemoration?” His proposal to create a National Statuary Hall became law on July 2, 1864 (sec. 1814 of the Revised Statutes). It provides that:

…the President is hereby authorized to invite each and all the States to provide and furnish statues, in marble or bronze, not exceeding two in number for each State, of deceased persons who have been citizens thereof, and illustrious for their historic renown or for distinguished civic or military services such as each State may deem to be worthy of this national commemoration; and when so furnished the same shall be placed in the Old Hall of the House of Representatives, in the Capitol of the United States, which is set apart, or so much thereof as may be necessary, as a national statuary hall for the purpose herein indicated.

All state statues, in accordance with this law, were placed in National Statuary Hall. However, the aesthetic appearance of the Hall began to suffer from overcrowding until, in 1933, the situation became unbearable. At that time the Hall held 65 statues, which stood, in some cases, three deep. More important, the structure of the chamber would not support the weight of any more statues.

Thus, on February 24, 1933, Congress passed House Concurrent Resolution No. 47 to provide for the relocation of statues and to govern the reception and placement of future additions (this resolution was enacted into law in 2000):

RESOLVED BY THE HOUSE OF REPRESENTATIVES (THE SENATE CONCURRING), that the Architect of the Capitol, upon the approval of the Joint Committee on the Library, with the advice of the Commission of Fine Arts, is hereby authorized and directed to relocate within the Capitol any of the statues already received and placed in Statuary Hall, and to provide for the reception and location of the statues received hereafter from the States.

Under authority of this resolution it was decided that only one statue from each state should be placed in Statuary Hall. The others would be given prominent locations in designated areas and corridors of the Capitol. The first statue was placed in 1870. By 1971 all 50 states had contributed at least one statue, and by 1990 all but five states had contributed two statues. 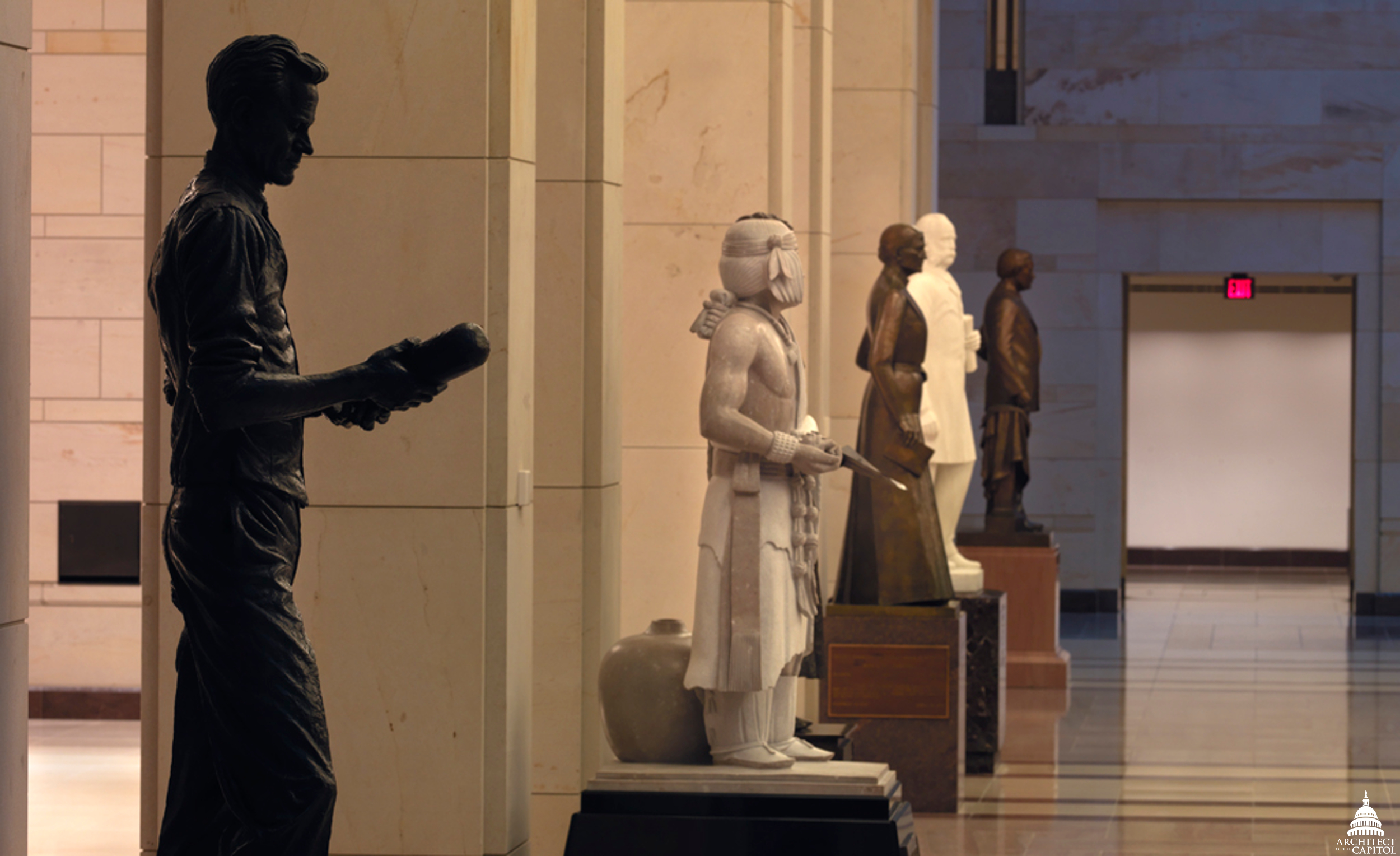 A second rearrangement of the statues was made in 1976 by authorization of the Joint Committee on the Library. To improve the crowded appearance of the collection, 38 statues were rearranged in Statuary Hall according to height and material. Statues representing 10 of the 13 original colonies were moved to the Central Hall of the East Front Extension on the first floor of the Capitol. The remainder of the statues were distributed throughout the Capitol, mainly in the Hall of Columns and the connecting corridors of the House and Senate wings. In 2008, the Joint Committee on the Library approved another relocation of statues to improve their display in numerous areas of the Capitol, including the Capitol Visitor Center.

Each statue is the gift of a state, not of an individual or group of citizens. Proceedings for the donation of a statue usually begin in the state legislature with the enactment of a resolution that names the citizen to be commemorated and cites his or her qualifications, specifies a committee or commission to represent the state in selecting the sculptor, and provides for a method of obtaining the necessary funds to carry the resolution into effect. In recent years, the statues have been unveiled during ceremonies in the Rotunda and displayed there for up to six months. They are then moved to a permanent location approved by the Joint Committee on the Library.

The Architect of the Capitol (AOC) is responsible for the care and preservation of the artwork in the U.S. Capitol, but our role also extends to the process before they even enter the building. The AOC Curator Division is involved in the evaluation and advising on new statues and busts, and also in when a state decides to replace a statue (link is external) in the National Statuary Hall Collection.