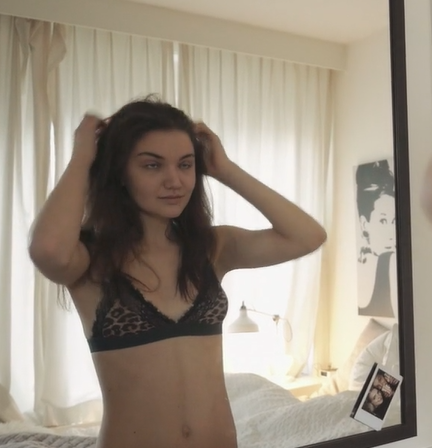 A poem Lara Roozemond wrote allowed me to look at the top pic I got from her video, in a new way. I love it. Lara has transported herself inside the mirror, where Audrey Hepburn is captured. Hepburn looks afraid.

“What are you doing in here? And, what is that energy you are wearing?”

That piece remind me of Sarah Moon, who worked with Silverstien, who took pics of Marilyn.

The three pics are not contrived or flattering which allows us to look closer. The façade is gone, the desired illusion. I want to do this kind of work. I am going nuts with creativity, at the end of my life. I call the three images ‘Renegade Mirror’.

Here is the testimony of Steven Silverstein who met and worked for the real Sarah Moon. Marilyn Reed was a friend of the Silverstein family and posed for a photographic shoot on Malibu Beach, where Steven honed his skills that would make him world famous. I did a painting from this image and gave it to my childhood sweetheart.

“I was broke when I returned but a month later got a call from Sarah Moon whom I had met while in Paris. She asked if I would help her crew with a production in Los Angeles. With the money I made, I bought a new 35mm Nikon and launched the testing I hoped would take me back to Paris. I worked hard at it, working twice a month with two models, Amy and Pam. To support myself I took a job as a waiter but was so bad at it I only lasted a week! As luck would have it, the very day I was fired, I got a call from Warner Bros. Records to do an album cover. I started picking up freelance jobs with more record labels and magazines – A&M Records, Capitol, Playboy and others.”

Here is the real SaraH Moon with the H put back in her name.