Ryan Kyle Coogler says he was born in Oakland. He left Oakland at the age of eight, and lived in Richmond. I lived in Richmond. There was a handful of other white people there. I lived in a house owned by my ex-wife, Mary Ann Tharaldsen. Because Ryan has come BACK TO OAKLAND where he attended the premiere of his movie ‘Black Panther’, I am going to give him the moniker ‘Oakland Coogler. I will give him a tour of the town I was born in, along with my friend, Ed Howard. Last year I wanted to attend his showing of his film. His brother was going to drive me around to look at Oakland’s murals, most painted by black artists. Please support Ed’s efforts to create a outstanding archive of Black History. Here is the other Grand Theatre in Richmond. That’s my Ford panel truck.

I was the general manager of the Upstairs Art Gallery in downtown Oakland that was founded by Rosalie Ritz who did courtroom sketches of the trials of Black Panthers and Patty Hurst. I have been watching the series about her, and its like Home Coming Week. I met Michael Harvey  at this gallery. He was an artist and one of the most charismatic Black men I ever met. He was very articulate. If he is still alive, he would be blown away by Coogler’s movie and success. He is an Oakland Boy who made it big. Michael and I were a part of Oakland Redevelpment, which was an attempt to build a new INTIGRATED city. We were building a city along with Walter Dallas and his acting troupe. There was a rebellion over a flower stand. What an adventure movie! Courtroom sketches can be called cartoons. Everyday you woke in Oakland, you knew there would unfold another incredible scene, brought to you by…….The People!

Coogler coins the “looks like me” phrase that Wiley ran with.  I lived in a large Victorian in downtown Oakland with The Loading Zone. We were the only whites. My ancestors founded the Fruitvale district. North Richmond was not safe for any race.

When I lived in a hotel downtown, I was walking around when I passed three black prostitutes.

“You better get off the streets. The Panthers are going to shoot up the place. They’re going to try to get Huey out of jail.”

Oakland Cooger made a make-believe movie. Anybody can take a race of folks aside and put them off by themselves. But, all the action is when we come together and try to blend. Huey Newton was a genius when it came to understanding this. He went to Oakland High School where he read history books. I knew the White Panthers.

At Oakland’s Grand Lake Theater on Thursday night, Coogler took to the stage to greet fans before the start of the movie.

“I just wanted to swing by and say thank you to you guys for taking time on a Thursday night to come see the film,” Coogler said to crowd, according to social media reports.

“I hope you enjoy the film,” he added while standing in the theater where he grew up seeing movies. “If you all pay extra close attention, there’s a couple Easter eggs in there for the Bay.”

Some in the crowd also talked about the “historical” significance of the film.

“This is really like a historical moment to have our superheroes that look like us right here in Oakland,” Carlotta Brown of the East Oakland Collective told ABC7.

One of the biggest mistakes of my life was to not walk thru that tunnel to the Oakland Coliseum in 1961 to see Bobby Blue Bland. Bobby was my man. I had made plans to see Ed Howard’s film, but, I got stuck in the middle of ‘The Tunnel of Fear’ and had nothing nice to say about Oakland. I didn’t go. I and my friends feared for my life. I did not mean to tempt fate, but, there it was, lurking in the dark, waiting for me.

Ed said he snuck into the Oakland and Paramount theatres. Was it to see that strange introduction of the movie ‘House of Usher’? I believe Roger Coreman appeared on stage to warn us we might suffer heart attacks. They had a cable coming down from the balcony on which slid a skeleton. This film is of historic significance.

So, here is the Tunnel of Racial Fear. If a white boy went down in there, a black boy would cut you ear to ear with a razor. The whole design was a set-up. Blacks didn’t go down there unless they scare a white, who will freak out – and go crazy on them! After encircling the Oakland Coliseum with fast roads, they stuck that tunnel in so you could leave the beautiful safe shore of Lake Merritt, and go to thy doom. Of course me and my best friend, Bill Arnold, found many good reasons to go down in that tunnel – late at night.

“As artists, we are obligated to go where normal people fear to go!”

And, there it is, the ‘Oakland Bohemian Motto’.  Were there such a thing as a Black Bohemians? Ed said he was one of the first Oakland Lowriders. But, he became a designer, an artist of sorts. In this photograph you see the tunnel, and the apartment where the Black Panthers lived in a penthouse. Huey knew about the Beats. He studied history. Being innovative was a big part of the New Oakland Cool. We crossed lines. We crashed through barriers. Our history is one of the most culturally interesting experiences the world has ever seen. The Black Panther exhibit at the Oakland Museum was the most viewed show, ever, and was held over for – an encore!

Ryan Kyle Coogler[1] (born May 23, 1986) is an American film director and screenwriter. His first feature film, Fruitvale Station (2013), won the top audience and grand jury awards in the U.S. dramatic competition at the 2013 Sundance Film Festival.[2] He has since co-written and directed the seventh film in the Rocky film saga, Creed (2015), and the Marvel Cinematic Universe superhero film Black Panther (2018). His work has received critical acclaim and commercial success.[3] In 2013, Time named Coogler to their list of the 30 people under 30 who are changing the world.[4] He frequently collaborates with actor Michael B. Jordan, who has appeared in all of his feature films.[5]

Coogler was born on May 23, 1986 in Oakland, California. His mother, Joselyn (née Thomas),[1] is a community organizer, and his father, Ira Coogler, is a juvenile hall probation counselor. Both parents graduated from California State University, Hayward. He has two brothers, Noah and Keenan.[6] His uncle, Clarence Thomas, is a third-generation Oakland longshoreman, and the former secretary treasurer of the International Longshore and Warehouse Union.[7]

Coogler lived in Oakland, until age eight, when he moved to Richmond, California.[6] During his youth, he ran track and played football.[8] He went to Saint Mary’s College High School, a private Catholic school in Berkeley, California,[9] and was good at math and science.[10][11] He started his college journey at Saint Mary’s College of California, on a football scholarship as a redshirt wide receiver his freshman semester intending to study chemistry.[6] While he was there, his English professor, Rosemary Graham, encouraged him to pursue a career in screenwriting.[11]

After Saint Mary’s canceled its football program in March 2004,[12] he transferred and earned a scholarship to play at and attend Sacramento State, where in his four years he grabbed 112 receptions for 1,213 yards and 6 touchdowns.[13] At Sacramento, he majored in finance and took as many film classes as he could fit in with the rigors of college football. Following graduation he attended USC School of Cinematic Arts, where he made a series of short films.[14]

While at USC, Coogler directed four short films, three of which won or were nominated for various awards: Locks (2009), which screened at the Tribeca Film Festival and won the Dana and Albert Broccoli Award for Filmmaking Excellence; Fig (2011), which was nominated for an Outstanding Independent Short Film by the Black Reel Awards; The Sculptor (2011), and Gap (2011), which won the Jack Nicholson Award for Achievement in Directing, and had a screenplay written by Carol S. Lashof.

Coogler accepts the U.S. Grand Jury Prize: Dramatic with the crew of Fruitvale Station at the 2013 Sundance Film Festival.

Coogler’s first feature-length film, Fruitvale Station (originally titled Fruitvale), tells the story of the last 24 hours of the life of Oscar Grant, who was shot to death by a police officer at Oakland’s Fruitvale BART station on January 1, 2009. The film was developed and produced by Oscar-winning actor Forest Whitaker. “I’ve worked with a number of truly unique voices, true auteurs,” Whitaker said of Coogler, “and I can tell when I’m talking to one.”[15] 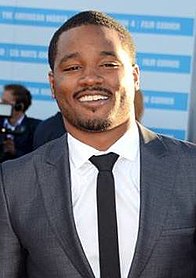 After the film premiered at the 2013 Sundance Film Festival, where it won the top audience and grand jury awards in the U.S. dramatic competition, The Weinstein Company acquired the distribution rights for approximately US$2 million.[16][17] The film was screened in the Un Certain Regard section at the 2013 Cannes Film Festival,[18] where it won the award for Best First Film.[19]

Following its release, the film won numerous awards and critical acclaim, including Best First Feature from the Independent Spirit Awards, Breakthrough Director at the Gotham Awards, Best Directorial Debut from the National Board of Review, and Best First Film at the New York Film Critics Circle Awards, among others.[20] Peter Travers of Rolling Stone called the film “a gut punch of a movie” and “an unstoppable cinematic force”.[21] A. O. Scott of The New York Times wrote that Coogler’s “hand-held shooting style evokes the spiritually alert naturalism of Jean-Pierre and Luc Dardenne“.[22] Todd McCarthy of The Hollywood Reporter called it “a compelling debut” and “a powerful dramatic feature film”.[23]

Fruitvale Station grossed over $17 million worldwide after its theatrical run.[24] On Rotten Tomatoes, the film received a score of 94% based on 195 reviews, with a critical consensus that reads, “Passionate and powerfully acted, Fruitvale Station serves as a celebration of life, a condemnation of death, and a triumph for star Michael B. Jordan.”[25] The film appeared on several critics’ top ten lists of the best films of 2013.[26]