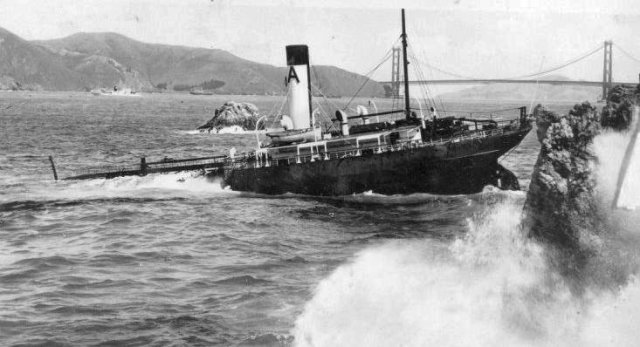 Not much is known about the immediate environmental effects of San Francisco Bay’s worst oil spill. That’s mainly because it took place in the late 1930s, when we just weren’t paying much attention to ecological issues.

But what we do know about the incident is that the passenger ship President Coolidge rammed the oil tanker Frank H. Buck at Lands End just outside the Golden Gate Bridge on March 6, 1937, and that the Buck then spilled about 2.73 million gallons of crude oil into the water — either immediately, or after storms thwarted halting efforts to pump remaining oil out of the ruined ship’s cargo tanks.

According to witnesses of the day, more than 20,000 birds died of oil contamination in the days after the collision. Rehabilitation efforts were nonexistent, and members of the SPCA patrolled local beaches with shotguns to put ailing birds out of their misery.

Frank H. Buck, who is president of the Frank H. Buck Company, a prominent fruit growing and shipping concern of San Francisco, is descended from ancestors who have been outstanding figures in the history of California in the days gone past. He was born on a ranch near Vacaville, Solano county, California, September 23, 1887, and is a son of Frank H. and Annie E. (Stevenson) Buck.

The Buck family is of English origin. Leonard W. Buck, the grandfather of Frank H., was a first lieutenant in the Union Army during the Civil war, and served as state senator from Solano county in 1891-93. Frank H. Buck, the father of the immediate subject of this biography, was his son, and was born June 8, 1859. He was the founder of the fruit growing and shipping business, in 1886, which is now under the management of his son. On the maternal side of Mr. Buck’s family, the Stevenson family is Scotch. Andrew M. Stevenson, his grandfather, was a lieutenant colonel in a Kentucky regiment during the Mexican war, and after the close of hostilities he settled in Vacaville, California, where he engaged in cattle raising. With his brother, George Bushrod Stevenson, he constructed the Vaca Valley & Clear Lake Railroad, which is now a part of the Southern Pacific railway system. He was state senator from Solano county about 1855. He was a first cousin of Adlai Stevenson, vice president of the United States from 1893 to 1897. Annie E. (Stevenson) Buck, mother of Frank H. Buck, was born January 20, 1861.

With the class of 1903, Mr. Buck graduated from the high school in Vacaville, and then took up his advanced studies at the University of California, from which he received the Bachelor of Letters degree in 1908. He then entered upon the study of law at Harvard, and in 1911 this famed institution conferred upon him the Bachelor of Laws degree. He was admitted to the California state bar in November, 1911, and from 1912 to 1917 he maintained a law office in the city of San Francisco. He actually resided in this city during his first year in the practice, but since has made his home in Piedmont, although he retains his old legal residence in Vacaville. In 1916, he became manager in charge of the interests of the Buck estate, his father having passed away in that year. The latter started the business of this organization in 1886, and it was incorporated in 1902. The purpose of the concern is the growing and shipping of decidnous fruit. Frank H. Buck was elected president at his father’s death. In 1919, he became a director in the Associated Oil Company and was made a member of its executive committee in 1922. In 1916 he became a director in the Belridge Oil Company; in 1916 a director in the Booth Kelly Lumber Company; and in 1918 a director in the West Coast Oil Company. He is also interested in the Tidewater Associated Oil Company, and in various banking and kindred associations. He is president of the California Growers and Shippers Protective League, and is vice president of the American Fruit and Vegetable Shippers Association. He has attained an influential position among the growers and shippers of fruit in California, and he is known as a business man who follows a careful and intelligent course in any activity which he may undertake.

Mr. Buck was married first in 1911, and by this union became the father of four children, namely: Frank H., Jr., Margaret Anne, C. Brevoort, and Elias Z., now (1931) being nineteen, eighteen, sixteen, and fourteen years of age, respectively. All of the children reside with their father at 17 Sotelo avenue in Piedmont, Mr. Buck was married secondly in Alameda, California, to Eva Benson, a daughter of Martin Benson and born May 18, 1899. Her mother is deceased. Mrs. Buck has a fine interest in various affairs of public nature. She is a director of the Women’s Athletic Club of Oakland, California, and also a director of the Baby Hospital Association in the same city.

The democratic party has been Mr. Buck’s choice of political affiliation. He is a member of the executive committee of the state central committee, and was a delegate to the 1928 democratic convention. He was a write in candidate for congressman from the third district in 1930, with democratic endorsement, as there were no party nominees at this election. He worships in the Presbyterian Church. He belongs to the Theta Delta Chi collegiate fraternity, and from 1919 to 1923 he was president of the grand lodge of the Benevolent and Protective Order of Elks. His name is also on the membership rolls of the Sutter Club of Sacramento; the Bohemian, Pacific Union, and Commonwealth Clubs of San Francisco; the Claremont Country and Athens Athletic Clubs of Oakland; and the Mount Diablo Country Club, He has given generously of his time and means to many enterprises of public nature in the bay district, and throughout his career has followed a thoroughly public spirited course of action. When the United States was engaged in war with Germany, he gave notable service locally. He was a member of the San Francisco legal advisory board; of the Vacaville council of defense; and of the prune advisory board under the food administration.