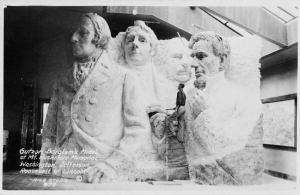 In the photo above, hanging on the wall of his wife, we see a portrait of John Fremont painted by the famous artist who rendered Mount Rushmore. Jessie was Gutzon’s patron. You will find an image of Rushmore in your American Passport.

When the President Elect knew he was going to win, he fell silent. This Master Brander understood he was now a candidate for Mount Rushmore – if he does something truly great! Trump needs me by his side, the Artist Sculptor and Republican Party Historian. Only I am qualified to trail-blaze his path to Immortality.

“Flattery will get you everywhere!”

Empress Zita was a Brand. Melania Trump is removing her Brand now that she is First Lady. Jessie Benton Fremont may have invented Branding in her promotion of her husband, John Fremont, who blazed the Oregon Trail, and authored his journals of his travels in Oregon and the Willamette Valley. John was a co-founder of the America’s first Abolitionist Party, the Republican Party, that was taken over by the neo-Confederate Dixiecrats in the endless maneuvers that has plagued my kindred’s party. Some say Trump killed Fremont’s party. He was the first Presidential Candidate. The Democratic Party is now rumored to be dead. What is left? THE TRUMP BRAND. It may be impossible for Trump to get rid of his Brand, his many companies before he takes office. This will cause a huge conflict of interest in regards to serving We the People.

I tried to get Lane County to change its name to the son of Joseph Lane because Joe was a Confederate who ran for President with John Breckenridge who is kin to the Bentons. Jessie Fremont is breaking ground for the Los Angeles Museum in photo above.

I am Branding my newspaper, and Christine Rosamond Benton’s artistic legacy, that includes our muse, Rena Easton, who I suspect may have come in contact with White Race Nationalists in Montana. I know the Native American family here in Eugene that are kin to John Grass who fought the military in Montana. The Native American Brand is very popular in Germany.

The McDowell family is the real Gone with the Wind Brand that Breibart claims is under attack. Senator Thomas Hart Benton married a McDowell, and was John Astor’s attorney who Branded the Oregon Territory ‘The Beaver Sate’. Those lustful European white men Spencer puts in his pile, wore beaver hats, made from the pelts of animals that swam in our streams. Benton was the author of ‘Manifest Destiny’.

To hear Trump disavowing a  neo-Nazi, while I and my families history continues to be ignored, is an outrage. Jill Hurtz said she would get back to me three days ago. People I have contacted know this history is power, and seeing I do not have anyone behind me, get on board the Snub Train, that the Reeds really got rolling with their legal threat.

Then, here come the Miller Brothers! Ina Coolege Branded Joaquin Miller ‘The Poet of the Sierras’ . Miller read his poems before European Royalty and the Pre-Raphaelites who inspired the founding of the NAACP.

On this day I found the National Association For the Advancement of Creative People. My NAACP will promote the interests of all artists regardless of race and religion. I will provide more details. When we are established, we will author a litter to President Trump explaining the radical foundation of the party he now leads – as a radical! We will compare Trump to John Fremont whose ideas would have made a better America – if he had won. Is the ghost of Fremont and Jessie standing behind ‘The People’s Choice’?

There are discussions about Trump selling off his massive fortune. I suggest he do so, and use the monies to fund a new WPA Program that put so many artists, writers, muralists, and sculptors to work.

I just talked to Kelly at the Deschutes Historical Society that hosted a traveling show on John Fremont.

I took a closer look of the photograph my grandfather took. Royal Rosamond was a author who camped on Annacapa Island with Dashiell Hammett. My aunt Lillan told me her father taught Earle Stanley Gardner how to write. I noticed there are three women in this photograph, one being my grandmother, Mary Magdalene Rosamond. There is something framed at the entrance to the tent. I believe two of the men are members of the Black Mask. I need help in identifying these creative people. My story of the Lost Habsburg Empress, is right out of the Black Mask. I am a Art Detective. Note the man sitting next to my grandmother, holding a gun

Like Mt. Rushmore itself, Borglum was a larger-than-life figure who demanded attention. Amid a career that spanned more than half a century, he carried on a romance with the California landscape, painting hundreds of seascapes, landscapes, crumbling mission exteriors, championship horses and a portrait of Gen. John C. Fremont, as well as sculpting a bust of Fremont’s wife, Jessie Benton Fremont, and the Los Angeles Times’ bronze eagle.

As he began to experiment with various painting styles, he attracted critics, friends, patrons — and editor Charles F. Lummis, who saw in Borglum the promise of better things.

“His paintings had many shortcomings and showed his lack of education. Yet there was in them a creative breadth that promised to make him heard,” Lummis wrote in his magazine, Land of Sunshine.

Borglum believed that he would be famous before he turned 30. Putnam, his teacher, mentor and lover, shared his dream.

His portraits led to his first significant art commission, in 1888, when Jessie Fremont asked him to paint her husband, who had explored and mapped the West. In return, she gave Borglum letters of introduction to her prosperous friends, including railroad magnate Collis Huntington, former California Gov. Leland Stanford and young Theodore Roosevelt.

Fremont’s portrait proved valuable, earning Borglum the loyalty and support of Jessie Fremont, who was instrumental in furthering his career.

“ASSOCIATION FOR THE ADVANCEMENT OF TRUTH IN ART.
ON the evening of the twenty-
seventh of January, in the present year,
a number of persons met at 32 Waverly
Place, in the city of New York. Be-
lieving in the overwhelming power of
the Truth, especially in Art, they had
for some time seen the necessity of a
united effort to revive true Art in
America, and had assembled at this
time to take counsel together, and if
thought proper to organize an Associa-
tion for the better promotion of the
end just stated.”

This was written in ‘The New Path’ Vol. 1, No. 1 (May, 1863), pp. 11-12. The Founding Father of this association and the American Pre-Raphaelites, Clarence King, has led be up a long path to a mountain named after him. It looks like Lonely Mountain with Alpenglow that is associated with a range of mountain called the Rose Garden.

The original building at 72 Waverly Place, is no more. On this lot stands the  Silver Center for Art and Science. Across the street is Washington Park where many famous Folk Singers were born. When I was seventeen, I lived six blocks away no 13th. Street.

No sooner was he the president of the ATTA, then Clarence went West to California to be with the California Geological Survey, thus beginning his illustrious career as a scientist. This is so key, because religious fanatics in the Muslim and Christian faith, are destroying art – and science! For this reason I am going to publish an Art Book wherein I declare Artists, Writers, Photographers, and Scientists a Protected Cosmology. I will be writing a proposal to Congressman Sam Farr of Carmel about the Lone Cypress Tree National Park and Preserve where Artists are legally declared Human Beings.

Jessie Benton was the living Muse of California who was tirelessly promoted by Charles Lummis who is seen in the groundbreaking ceremony for the Southwest Museum in Los Angeles with Elizabeth Fremont, Jessie’s daughter. Jessie wrote short stories for Lummis’s Out West magazine, as did my grandfather, Royal Rosamond. Both authors promoted the Golden State that John Fremont secured for the United States. One historian titles Jessie ‘Mother of the Race of Southern California’.

On Monday, a public letter from Ivanka Trump HQ noted (in part):

“Our company’s mission is not political — it never was and it never will be — however, Ivanka, personally, has an increased opportunity to advocate for women and be a positive force for change. As a private citizen, with full awareness of her heightened visibility, she will broaden her efforts to take a stance on issues of critical importance to American women and families. Meanwhile, our team will continue working to inspire and empower women to create the lives they want to live through solution-oriented product and inspiring content on IvankaTrump.com and across social media.

Effective today, you’ll notice a shift in our social channels. Follow @IvankaTrumpHQ on Instagram, Facebook and Twitter to get the latest on #WomenWhoWork, The Skill Set, fashion stories and the rest of the content we’re creating each week. Keep following @IvankaTrump on all channels for Ivanka’s personal feed.”