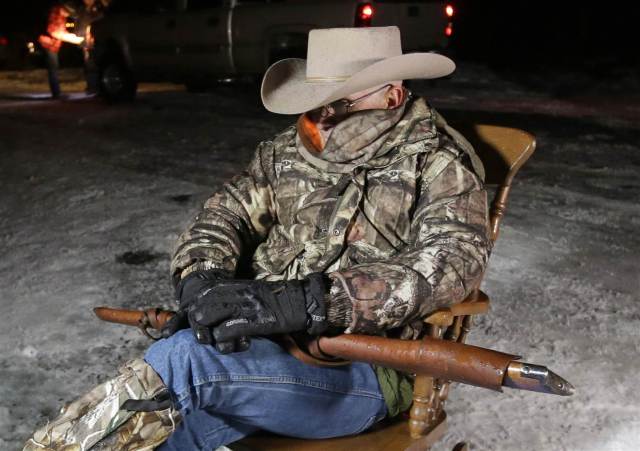 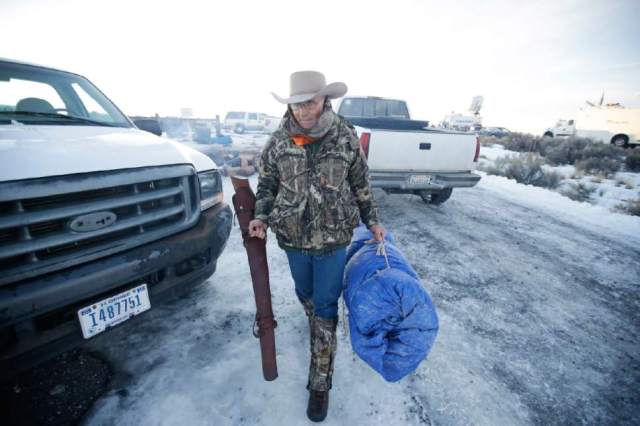 The movie ‘Badlands’ is a cult classic. In the death of Lavoy Finnicum by Law Enforcement Firing Squad, once again we have a case of life imitating art. It’s as if pretty Victoria Sharp had just seen the movie, and couldn’t pack her backpack fast enough when her mother asked;

“Hey pretty child, do you want to go to Burns to back up Pretty Boy Lavoy, lay the righteous power of Jesus on him that will make him impervious to bullets?

“Lah keeps pressing, reminding Sharp of the danger she was placed in by Finicum — who had repeatedly expressed a wish to die for his interpretation of the U.S. Constitution.

“You almost got shot, and you’re still willing to be a part of a protest in the future?” Lah said.

“It’s worth it,” Sharp said, tearing up. “If I lose my life for the future of America, it’s worth it.”

There is a crucifixion scene where the Bad Boy stands out in the field crucified to on his rifle. Lavoy more than like saw this scene and got all hot am bothered – as did Victoria! They were destined to meet, and be together in what amounts to The Last Great Western Shootout! Slowly, I saw all this coming in my prophet posing with my Muse, Irene Victoria Easton who I suspect had fallen in with a Militia Posse in Montana.

When Lavoy first saw Victoria, it was love at first sight. Here was his angelic femme fatal. A younger version of a femme fatale may be called a fille fatale, or “fatal girl”. Levoy was wanting to die, go to his cross, but, looking around he saw nothing but brutal farting men who couldn’t eat enough junk food. Who wants to get shot in front of these sorry-asses?

Victoria knows she’s got those bee-stung swollen lips that scream “Blow Job”. She wants to take them on the road and be a ‘Slut For Jesus’. Here was the Witness Lavoy prayed for. Here is the movie ‘Lolita’.

While the Jeep stayed at the stop, a standoff was developing between Finicum — who had driven a distance up the road — and numerous officers.

Sharp had fallen asleep in Finicum’s truck when she woke with a start. She was confused at first, then saw a number of police vehicles. Finicum didn’t want to get out of the car, and was determined to try and drive to the local sheriff on his own, she said.

Sharp said the passenger in the front of the truck, Ryan Payne, stuck his head and hands out of the window. He then said, “They fired at me.” Payne exited with his hands up and surrendered, officials said.

The FBI’s statement does not mention any shot fired toward the truck this early in the standoff.

Sharp insisted she heard a shot and said that’s why she didn’t exit the vehicle immediately. For 3 minutes and 47 seconds, the FBI video shows the white truck idling in the road.

“LaVoy was talking to them. He was not aggressive in any way to them,” said Sharp. “He said, ‘We’re going to talk to the sheriff. You need to leave us alone, back down.'”

The people in the truck were discussing what would happen if Finicum drove off, Sharp told CNN. The FBI said its agents and state troops gave verbal commands for the truck occupants to surrender.

LaVoy Finicum remained determined to try to see the sheriff on his own, said Sharp. “And then he said, ‘Hey guys, I’m going to drive.'”

Shawna Cox told her to get down, Sharp said. “‘They might shoot when he starts driving,'” she says Cox told her.

Minutes later, the truck encountered another roadblock and went into the snow bank.”

Sometimes when I got ‘Big Blue’ out on the highway I make a left turn in my mind, and come to Nebraska to get you. And then we head to Alaska where we build our cabin. Have you ever wanted to build a house from scratch? Do you wear blue overalls?

Since your visitations ended, I began to design a house for you to dwell in. It’s a hobby of mine to turn on the T.V. And work on floor plans. You have been placed in a home with only 670 square feet, to a castle with 6,000. When I learned you married a Commander, I built stone estates with seven gables around you, so you would always have a place to dwell in this cruel word. I did consider a trailer. I did! Yes, Rena wants to live here, I said; And alas you said…………

Was it 1973 that Michael Harkins and I talked about taking his white Bentley to Nebraska in search of Rena Easton. Michael had beheld the large painting of Rena I did when I was Peter Shapiro’s roommate again. He asked me if I knew what happened to her. I lost her grandmother’s phone number.

What I suggested, is, we make a movie about our Search for Beauty – who may be the “Female Messiah”. I suggested we get some white suits from Saint Vincent De Paul’s and Italian sunglasses. We would pull to the curb and ask young beauties if they knew Irene Christiansen ‘The Serene Christ’ of our age.

“She may be the Female Messiah.”
“The what? Where are you guys from?”
“Italy.”

Michael was asked by Oliver Stone’s people to contribute his memories of his friend, Jim Morrison. He told them to go fuck themselves. Michael was goof friends with the Beat Poet Michael McClure who put Jim in touch with the poetic Muse. Yesterday I found a book that explores Jim’s “Jesus Complex”.

However, folks in Springfield (Springtucky) think I’m a lovable Redneck because I drive ‘The Truck’ a 1972 Ford four wheel drive with a great shell folks try to buy from me. It’s Oregon law that some guy with Grey hair has to drive ‘The Truck’. that I named ‘Big Blue’. In the bed I got a antique gas can, ice chest, a water cooler, and a real hemp rope. My grandfather, who I never met, was raised in Montana. He was a real cowboy.

After Nisha read Rena’s poem, I drove home in bliss, thinking I had the most beautiful end to a novel one could hope for. She was by my side as I crossed the river – into hell! 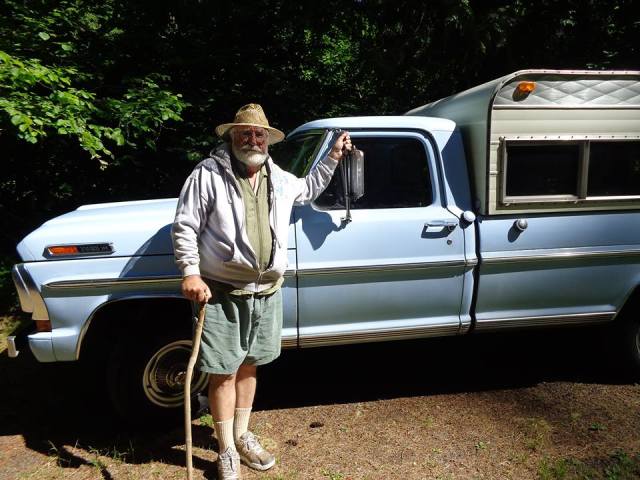 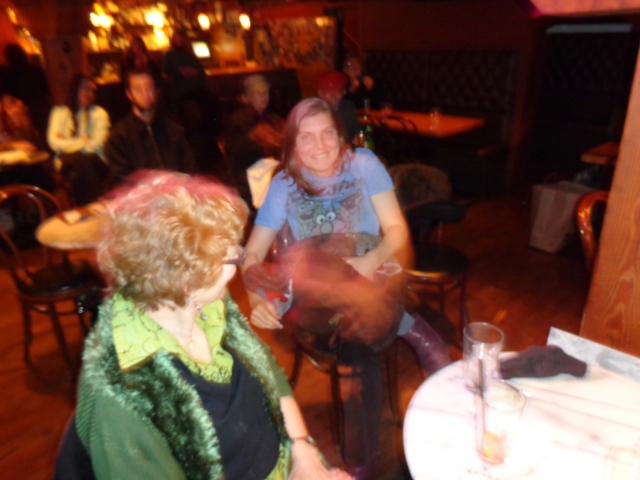 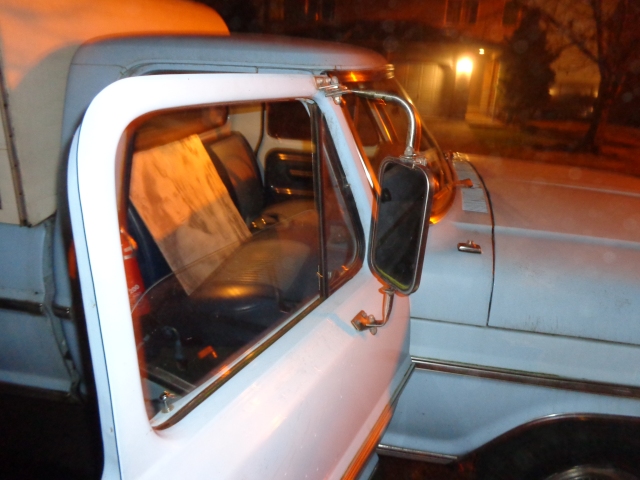 When Rena called sheriff, Dan Mayland, and filed a false police report wherein she claims I was stalking her, she in affect put up a WANTED poster in her county, and the whole State of Montana. How many citizens of the fine State, where my grandfather was born, have heard the egregious slander, and extreme abuse, coming from an old girlfriend who I claimed was my Muse, and was the Muse of my famous sister, Christine Rosamond Benton, the granddaughter of Royal Rosamond, who is kin to famous Benton artists. The Benton family also helped secure and procure the Oregon Territory for the United States.

Rena Eastons’ four page letter began with a recital of the dire straights she and her husband were in that could not help but solicit a desire to help this couple, which I publicly offered on my blog the day before Rena contacted the sheriff, and made false accusations against me. How can I not conclude Rena is still in that “dark and dangerous place” she told me about in her letter where she apologizes to me for “being a abusive girl”.

“Greg, I want you to know & listen. I apologize for being an abusive girl when our paths crossed in 1970. I had come out of a dark and dangerous place, and you helped me. Please forgive me. No one deserves abuse. I have learned a lot now.”

A femme fatale (/ˌfæm fəˈtɑːl/ or /ˌfɛm fəˈtɑːl/; French: [fam fatal]) is a stock character of a mysterious and seductive woman whose charms ensnare her lovers, often leading them into compromising, dangerous, and deadly situations. She is an archetype of literature and art. Her ability to entrance and hypnotise her victim with a spell was in the earliest stories seen as being literally supernatural; hence, the femme fatale today is still often described as having a power akin to an enchantress, seductress, vampire, witch, or demon, having power over men.
The phrase is French for “fatal woman”. A femme fatale tries to achieve her hidden purpose by using feminine wiles such as beauty, charm, and sexual allure. In some situations, she uses lying or coercion rather than charm. She may also make use of some subduing weapon such as sleeping gas, a modern analog of magical powers in older tales. She may also be (or imply that she is) a victim, caught in a situation from which she cannot escape; The Lady from Shanghai (a 1947 film noir) is one such example. A younger version of a femme fatale may be called a fille fatale, or “fatal girl”.