Yesterday I talked to Marilyn Reed about the Sawtelle, and her neighbor, John Lupton. Marilyn’s brother, Stanley, was married John’s wife’s sister, I believe. I was supposed to interview M at the Eugene Art Walk last night, but it was moved to next week due to New Years.  She is a gold mine and there is no end to the information I  capture, with patience, because Marilyn is a humble soul, and not a name dropper like me. I brought up John Lupton. She used to baby-sit his son, and I would come over to neck with my first girlfriend on the couch. I was impressed. M had already introduced me to Les McCann who played and sang a tune for us.

I asked M how this actor felt living in the Sawtelle, and how he got there. What I have been trying to do is establish the Sawtelle as a haven for the Beats, Folk Artists, and early Hippies. Our friend, Bryan MacLean played at a coffee house Marilyn and I found in 1962, when we were fifteen and sixteen. It was a tea house. After school we would sit by the fire and I would draw M. An hour ago I discovered John played a Beat Writer in the movie ‘The Rebel Set’. I struck the Mother Load, and arrived at the archetypal hub.

Here is my painting of Marilyn who looks like the waitress who strikes a pose. That’s John Lupton under the painting.

I told Marilyn we have been having the same conversation for forty-five years, we very interested in Beats and Bohemians. To discover that John played a Beatnik writer is “far out and floating”. Gloria Moreland plays a Bali Dancer. M’s daughter, Nisha, lived in Bali and studied Gamalin music. Nisha read Rena’s poem while her step-father played drums at the Granary poetry reading. In this movie a guy checks out Gloria’s ass, which she was famous for. When M was babysitting for Kathy down the street, Arnold Palmer checked out M’s sixteen year old ass as she walked out of the room. I caught him and gave him a hard stare. Kathy was dating his good friend who MCed a golf show. This was the start of our break-up. Kathy was a jet-setter who knew everyone in LA. She lived in the Sawtelle. Marilyn was also a Whiteaker Pioneer.

As a profound coincidence I was telling M about my FB friend, Ben Toney, and the movie Expresso Bongo also made in 1959 at the height of the Beatnik Craze. I have found my alter-ego, King Invader, a poet who reads in The Rebel Set.

Marilyn is still a good friend of Jazz great, Les McCann. After we broke up she went with Jeff Pasternak to France on a ocean liner. Here she is having dinner with Jeff onboard. Jeff founded a rock group ‘The Mustard Greens’ that played at the Whiskey A Go-Go, where he met ‘The Doors’ that he tried to get in his father’s movie.

“Bryan started playing guitar in 1963/64. He got a job at the Balladeer before it changed its name to the Troubadour Club, playing back-up blues guitar. It was here he met the pre Byrds Jet Set while dating Jackie De Shannon and he became ‘fast friends’ with David Crosby. He moved away from home and by early 1965 he became road manager for the Byrds on their first Californian tour with the Rolling Stones.”

Bryan was a roadie for the Byrds when he was seventeen. We were both on the brink of dropping out of high school that we had outgrown. Bryan told me he was going to got on tour with the Byrds in Europe, but because he was underage, then did not take him. Bryan went to live with the Beat Artist, Vito Paulekas

In 1966 I went with my friend Nancy Van Brasch to see ‘Love’ at the Filmore. Nancy and I lived in a famous commune in SF, and she dated Stanley Augustus Owsely. Christine Rosamond came to live with us, and she went on a date with Nick Sands. I later got to know members of ‘The Brotherhood of Eternal Love’ who bought me art supplies. I was the Artist in Residence when I lived with ‘The Loading Zone’.

I had my first art show at the New Balladeer that is on the corner of Massachusetts and Sawtelle. Bryan’s Beatnik friend slept in a cot in the store room, and was later murdered by my second girlfriend’s father. Bryan was invited to Sharon Tate’s home the night she was murdered by the Manson family, but, he had a previous engagement. Consider Tyler Shields and the Eastwoods.

Why are Beatniks getting involved in a bank heist? The star of Zabriskie Point was a Mel Lyman devotee. Mark Frechette held up a bank with another Lyman Family member after he made his movie. He had real-life interests. Mel Lyman is my kindred who created a network of Miscans, Actors, and Artists. He is in my family tree. He married Jessie Benton, a cousin of my ex-brother-in-law, muralist Garth Benton, who starred in movies, as did his first wife, Alli McBride.

Ray Miller might be the first Beat Writer depicted in a film. What was Ken Kesey up to in 1959? Was Jack Kerouac ever in a movie? My fictional author Don The Juan’ Roscoe is on his way to becoming a Beat Writer after Ray ‘The Bank’ Miller.

Rena Easton, the dancer, is foreseen in the Bali Dancer, played by Moreland. This is the blueprint…..the far-out groovy blues-print that has been floating around in Bohemian Lore waiting to come home to………….The Sawtelle!

The concept of an archetype /ˈɑrkɪtaɪp/ is found in areas relating to behavior, modern psychological theory, and literary analysis. An archetype can be:

In the first sense, many more informal terms are frequently used instead, such as “standard example” or “basic example”, and the longer form “archetypal example” is also found. In mathematics, an archetype is often called a “canonical example”.

He is considered a literary iconoclast and, alongside William S. Burroughs and Allen Ginsberg, a pioneer of the Beat Generation.[2] Kerouac is recognized for his method of spontaneous prose. Thematically, his work covers topics such as Catholic spirituality, jazz, promiscuity, Buddhism, drugs, poverty, and travel. He became an underground celebrity and, with other beats, a progenitor of the hippie movement, although he remained antagonistic toward some of its politically radical elements.[3][4]

In 1969, aged 47, Kerouac died from internal bleeding due to long-term alcohol abuse. Since his death, Kerouac’s literary prestige has grown, and several previously unseen works have been published. All of his books are in print today, including The Town and the City, On the Road, Doctor Sax, The Dharma Bums, Mexico City Blues, The Subterraneans, Desolation Angels, Visions of Cody, The Sea Is My Brother, and Big Sur.

On August 29, 1973, he and two members of the Fort Hill commune attempted to rob the New England Merchant’s Bank in the Fort Hill section of Roxbury, a neighborhood of Boston, Massachusetts. One of the trio, Christopher “Herc” Thien, was killed by police. Frechette and Sheldon T. Bernhard were arrested and pleaded guilty. Frechette was sentenced a term of six to fifteen years in prison.[6] He was confined in the minimum security state prison in Norfolk, Massachusetts.

The Rebel Set is a 1959 American film directed by Gene Fowler Jr. It was later featured and riffed on Mystery Science Theater 3000.

Mr. Tucker (Platt), proprietor of a Los Angeles coffee house, hires three down-on-their-luck patrons – out-of-work actor John Mapes (Palmer); struggling writer Ray Miller (Lupton); and George Leland (Sullivan), the wayward son of a movie star – to participate in an armored car robbery to take place during a four-hour stopover in Chicago during the trio’s train trip from Los Angeles to New York. Tucker and his henchman Sidney (Glass) fly ahead to set up the robbery, which goes off without a hitch. However, once back on the train, Leland’s greed gets the better of him, but Tucker double crosses the trio, eliminating Leland and Miller, leaving Mapes as the only one left to stop Tucker from getting away with murder – along with the entire haul.

Vikki Dougan (born 1929) is a model and actress. She is most famous for appearing at social events in a series of daring low-cut backless dresses throughout the 1950s.

Dougan began modeling at age eleven. She made for herself a successful career in modeling before gaining her first movie role in Back from Eternity as an uncredited showgirl. She gained small parts in another nine movies.

In 1953 publicity man Milton Weiss had the idea of promoting Vikki using the backless dresses to garner publicity. The idea was to gain a contrast with the fashion for models and actresses with large bosoms, such as Jayne Mansfield. Throughout the 1950s she scandalized more respectable Hollywood society with her appearances in her daring backless dresses.[1]

In 1953 photographer Ralph Crane photographed her extensively for Life Magazine. Their edition of October 26 featured her on the cover.

1961 her appearances in her backless dresses became celebrated in song by The Limeliters.[2] It appears on the album, The Slightly Fabulous Limeliters.

In June 1957 Dougan appeared in the (Vol. 4, Issue 6) edition of Playboy magazine. She featured again in the December 1962 issue, under the section “Playboy’s Other Girlfriends”.

In January 1964 Cavalier magazine featured twelve nude photographs of Vikki Dougan in a pictorial entitled “The Back is Back”. Dougan brought a lawsuit against the magazine, stating that the magazine did not have permission to publish them. The photographs had been posed for Playboy but Dougan had subsequently declined to let Playboy publish the photographs.[citation needed]

Throughout the 1960s she dated a string of prominent Hollywood men, including Frank Sinatra.[3]

Broken Arrow is a fictionalized account of the historical relationship between Indian agent Tom Jeffords, played by John Lupton, and the Chiricahua Apache chief Cochise, portrayed by Michael Ansara. 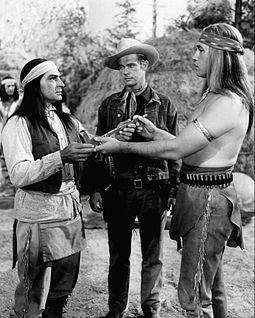 Broken Arrow was one of the few westerns to portray Native Americans in a positive light, but Michael Ansara found the role unchallenging. Ansara told TV Guide magazine in a 1960 interview: “Cochise could do one of two things–stand with his arms folded, looking noble; or stand with arms at his sides, looking noble.”[1]

Tom Fadden (1895-1980) played the character Duffield in seventy episodes of the series. Early in his career, Sam Peckinpah was among the writers on the series.

1 Response to The Rebel Set