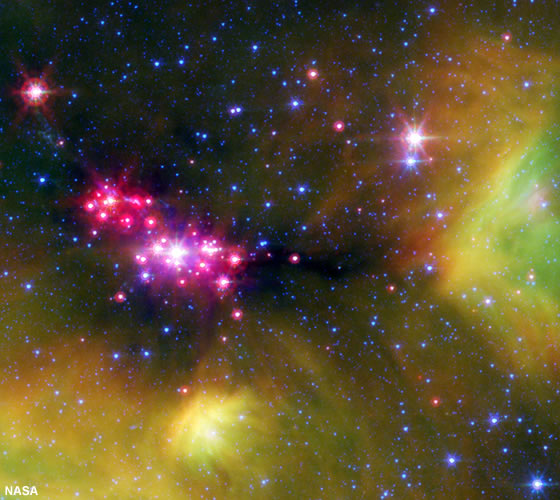 Zane Kesey and the bus Further showed up at Ken Kesey Square today. Putting in an appearance was first discussed on Zane’s Facebook last week due to the notion a developer wanted to buy The Square, evict the statues of Ken, and build a high-rise. I posted my efforts to save the cottage Ken lived in when he went to the University of Oregon, The Augurs Test of the Kesey Mural, and my finding of The Lost Creamery Mural.

Tomorrow night Cozmic Pizza will be celebrating the 50th. Aniversary of the Acid Tests Kesey conducted. In 1966 Kesey helped put on a show at the Open Theater in Berkeley where was founded, BEAF – Berkeley for the Experimental Arts Foundation. My friend Peter Shapiro played here with The Loading Zone, and weeks later at the Acid Test held at Longshoreman’s Hall. 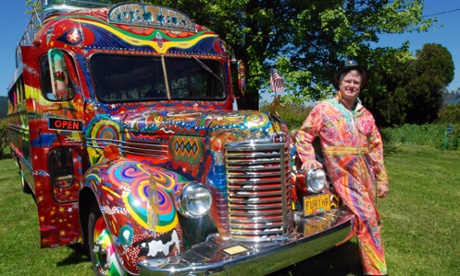 In a May 14, 2014 photo, Zane Kesey poses with the latest version of the psychedelic bus Further in Pleasant Hill, Ore. Kesey is raising money on Kickstarter to put the bus on the road to commemorate the 50th anniversary of the 1964 LSD-fueled bus trip by his late father, author Ken Kesey, and his pals, the Merry Pranksters. (AP Photo/Jeff Barnard)

Ramon Sender co-produced the Trips Festival with Ken Kesey and Stewart Brand. It was a three-day event that, in conjunction with The Merry Pranksters, brought together the nascent hippie movement for the first time.[citation needed] The Trips Festival was held at the Longshoreman’s Hall in San Francisco in January 1966.[2] Counterculture sound engineer Ken Babbs is mostly credited for the sound systems he created for the Trips Festival. Prior to Babbs’ creation, it was discovered that particular music usually sounded distorted when cranked to high levels because of the cement floor on the San Francisco Longshoreman’s Union Hall (where the Trips Festival was taking place). Babbs being a sound engineer resolved the problem. He made sound amplifiers that would not create distorted sounds when turned up to high sound levels.[citation needed]

Organized by Stewart Brand, Ken Kesey, Owsley Stanley, Zach Stewart and others. Ten thousand people attended this sold-out event, with a thousand more turned away each night.[3] On Saturday January 22, the Grateful Dead and Big Brother and the Holding Company came on stage, and 6,000 people arrived to imbibe punch spiked with LSD and to witness one of the first fully developed light shows of the era.[4]

The Marbles were a psychedelic and rock group whose second most notable performances was at the Trips Festival on January 21, 22 and 23 along with Jefferson Airplane, The Charlatans and The Great Society. Both Shapiro and Dowler went on to become members of Paul Fauerso’s The Loading Zone.[5][6] The Loading Zone‘s first major concert was the Trips Festival at the Longshoreman’s Hall in January 1966.[2] Big Brother and the Holding Company was formed at their first gig, the Trips Festival. In the audience was painter and jazz drummer David Getz, who soon joined the band.[7][8][9]

“I also borrowed a white noise machine, which was supposed to help you meditate and get into other brain wave patterns. We also had taped layers of music, playing simultaneously, and added voice readings from the Book of Revelations from the Bible. It was a multimedia event. We called it “Revelations.”

The Open Theater in Berkeley is most famous for debuting Big Brother and The Holding Company, and for being one of the incubators of the Trips Festival, which we have covered elsewhere. Indeed, another blogger discovered a listing in the Oakland Tribune Theater section that listed one of (if not the) first advertisements for “Psychedelic Music” at the Open Theater. Following the lead of this blogger, I reviewed the Theater Sections of The Oakland Tribune for 1965 and 1966, and managed to piece together the brief, but interesting history of the organization. I apologize in advance for any serious Theater scholars who have stumbled across this, as my focus is more on the musical side of the venture.

The Oakland Tribune first mentions the Open Theater on July 21, 1965. Founders Ben and Rain Jacopetti had formed a group called the Berkeley Experimental Arts Foundation “for the presentation and study of new art forms and trends”. After opening on September 30, 1965, the Open Theater began presenting shows every weekend, and sometimes on weekdays as well. The first listing above (under the heading Little Theaters, from the Sunday, November 7, 1965 Tribune) was typical of their Fall 1965 offerings. There was new theater on Fridays and Saturdays, and on Sunday they had “Sunday Meeting,” a spontaneous meeting. Sometimes music was advertised, as presented by either Ian Underwood or The Jazz Mice, Underwood’s trio.

It was the Sunday Happenings that seemed to be one of the precursors to The Trips Festival. According to Charles Perry’s 1984 book Haight Ashbury: A History, there was apparently multi-media performances, with lights and nudity (too much nudity for San Francisco’s Broadway), music by Underwood and others, an Art Gallery featuring contemporary art, and so on. The bass player for the Jazz Mice was artist Tom Glass, known also as Ned Lamont, and a painting of a huge comic book-style painting of his graced the lobby.

In January, the open theater begins to shift somewhat more towards music. The second (split-up) entry is from the Sunday, January 9, 1966 edition of Oakland Tribune. The Sunday night happening is followed by an apparently musical performance by Day Wellington and The Poor Losers. The next weekend is January 14 and 15, when The Loading Zone and Big Brother make their debuts, in evenings of “rock and roll and theatrical improvisation”.

The weekend of January 21-22-23 was the Trips Festival, in which the Open Theater participated. They surely contributed some multi-media, and Ian Underwood’s Jazz Mice played the first night. On the Saturday night (January 22), Underwood and others presented an avant garde musical performance. The last day of the Trips Festival, however, the Open Theater has its Sunday Meeting as usual, although perhaps some of the regular participants may have been a little worse for wear.

The last clipping is from the Sunday January 23 edition of the Tribune, noting the Happening, and also upcoming musical events. They are

Friday, January 28, 1966
Performances by Congress of Wonders and Ned’s Mob, introducing new material.
Congress of Wonders were a comedy trio, also regulars at the Open Theater, who did hip comedy and performance art (they later released a few albums). Ned’s Mob are unknown to me.

Saturday, January 29, 1966
Rock and Roll dance featuring The Loading Zone
This would have been The Loading Zone’s third performance, to our knowledge, the first two having been two weeks earlier at the Open Theater (Jan 14) and then at the Trips Festival (either Jan 21 or 22). The Loading Zone was based in Oakland.

Work on the Ken Kesey mural in downtown Springfield came to a sudden halt while I registered the auspices of this grand undertaking. As Master Augur of the West Coast, I felt it was my civic duty to put Ken’s mural to the Augur’s Acid Test. I am happy to report this fine work of art passed with flying colors.

Today, after Zane Kesey questioned the accuracy of the video I posted on his Facebook, I returned to 1795 Columbia Street in Eugene where his father lived, in order to find the man the Mailman told me about back in March of 2014. To my dismay, the Kesey cottage was torn down and turned into the Wasteland that the renowned Scholar, Elzbieta Oleksy, referred to when she called Cuckoo’s Nest a modern grail legend.

. I thought I would go look for a helper after one guy did not show for a lunch. I see musicians playing in Ken Kesey Square. A young woman takes my phone number. We meet for two hours, then, after she sends me her poem for my critique, I am getting death threats from homeless anarchists who are trying to take over Ken Kesey Square. What did I say! This is what Michael was talking about. The rabble will drag you off your horse and open you like a can of tuna.

“I can’t get any respect!” Says this former teacher at the UofO.

I have avoided going downtown for eighteen months. If the Keseny mural was unveiled there, I would not have gone, and would not have met Nancy, who would not have told me Erin Sullivan was one of the artists who painted the Creamery Mural, that Erin supplied the lost image of.  CONNECTIONS! SYNCHRONICITY! Hold on to your hats, folks, for the Cosmic coincidences are really going to blow.

“You’re getting it from the source.” Michael says as he shows me a quote for Ken saying he lived at 1795 Columbia.

All of a sudden my Cosmic Trigger goes off!”

“Oh. that’s it. The Horses Mouth. That was the movie going on with the Kesey mural un-veiling. Have you seen the movie with Alec Guiness?”

“My friend just recommended that movie to me – yesterday!”

My reader now has a choice of sound tracks for what you are going to read next. Here is the music used for the soundtrack of The Horses’ Mouth’.