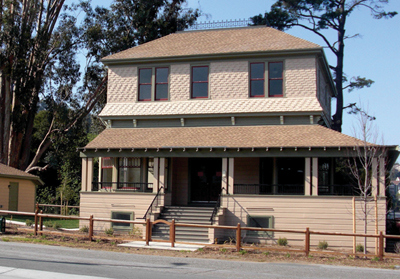 I suspect the Tanforan Cottages are two of the six portable houses that Carl Jake brought about the cape on a Clipper Ship and set of up south of San Francisco.  I assumed they were erected in Belmont, but, I just read there was a theme park called ‘The Willows’ in the Mission Dolores that was a retreat as well. With the establishment of the Turnverein on Bush, and another in Redwood City, I believe Janke was part of a movement to bring Forty-Eighter Revolutionaries to the Bay Area in order to make a Utopian State.  During, and after WW1, when anti-German hatred was at its peak, these pioneers lost their dream, and all the work they had done. Tanverien became Tanforan, and alleged Spanish name, but, there is nothing Spanish about it. The story of Toribio Tanforan is hogwash. I suspect the old schoolhouse in Belmont is one of the portable houses.

Before the Gold Rush Americans and European wanted to visit and live in California, the last Frontier. Amusement Parks were all the rage. They were Human Be-ins. I suspect my grandmother, Melba Broderick, met Victor Hugo Presco at a theme park.

Landmark 67
Tanforan Cottage 1
214 Dolores Street Between 15th and 16th Streets
Mission Dolores
Built 1853
This is one of a pair of redwood cottages built by the Tanforan ranching family on land that lay within the 1836 Mexican Grant to Francisco Guerrero. Located only half a block from Mission Dolores, the oldest building in San Francisco, these two cottages are probably the oldest residential buildings in the Mission District.

Landmark 68
Tanforan Cottage 2
220 Dolores Street Between 15th and 16th Streets
Mission Dolores
Built 1854
The following is quoted from Here Today, San Francisco’s Architectural Heritage by Roger Olmsted and T. H. Watkins, published by Chronicle Books in 1969:
Two very old houses that have maintained their original appearance can be seen side-by-side at 220 and 214 Dolores Street. The “Tanforan Cottages,” so called because members of the family of Toribio Tanforan occupied them from 1896 to 1945, are simple frame structures with modified late Classical Revival facades. Though very nearly identical in appearance, they were not constructed at the same time; 214 Dolores is said to have been built a little before 1853, 220 not long after that date. This dating is questionable, though, as the first substantiated date is 1866, when Revilo Wells, owner of 214, had water piped in. There is still a small carriage house behind 220 Dolores – occupied as late as 1940 by one of the Tanforan carriages. The large gardens of these houses have been well-maintained and contain many specimens of turn-of-the-century San Francisco taste in flora.

William had married Augustus the daughter of Carl Janke and lived in the city of Belmont California. I then looked for Carl Janke in the catalogue and found an entry in the history of the Daughters of the American Revolution, a encyclopedia of around four books. It said Carl brought six portable houses around the cape and erected them in the city of Belmont that was not incorporated until 1926. About ten years ago I read that one of the Tanforan cottages was moved from Belmont, they on a Spanish land grant that came to be owned by Toribio Tanforan, the grandson-in-law of Jose Antonio Sanchez.

No one can find any history of Toribio. Why then is being honored? Jose Sanchez is very famous in regards to Spanish land grants. There is no Tansforan land grant. One historian says Toribo was a gaucho from Chile, and thus he was a excellent horseman. And, that’s it! This is what conects the mysterious Torribo to the Tanforan race track and Belmont. Give me a break! Why are two houses in San Francisco named Tanforan?

I suspect Tanforan was the name of the German theme park that Charles Janke built in Belmont, it said he modeling it after a German way of life. Tanforan is not a Spanish name. It also resembles Turnverien, who were Forty-Eighters who fled Europe in the ‘Erupecan Spring’. Consider the ‘Arab Spring’ no doubt named after the revolutions that swept Europe, including Italy, that bid Count Leonetto Cipriani to leave his home in Belmont and pretty much rule the United Italy under Garibaldi and Victor Emanuel. Why wasn’t Ciprianis name applied to a race track? I did find a ‘Cipriani Dog Park’.

In his Overland Diaries Cipriani discuss his prefab house that was out together by screws. This is the famous house in Belmont, called ‘Ralston Hall’. Across the bay in emryville Mr. Coggeshall and his wife have screwed together their new home that was shipped around the cape in 1849. Is this yet another of six portable houses brought around the Cape by my kindred, Carl Janke? San Francisco realtors are selling land in Emeryville. What we are looking at is the birth of California Real estate where track homes are built to arrack folks from back east. Did Cipriani invest in real estate? Who financed him if her did?

“The second sale that Vicente Peralta made was for the greater portion of his estate to a group of San Francisco investors for $100,000 in August 1853. These investors then sold off plots within the estate. Perhaps the first American to settle in what later became Emeryville was Frederick Coggeshall, a native of Massachusetts who came to San Francisco in 1849 and purchased a 45-acre tract on the San Pablo road near where 45th Street is today. He and his wife Lavinia assembled a small house, which may have been shipped around Cape Horn, farmed the land, and raised pigs and cattle.”

One so called historian says the Tanforan Cottages were built by ships carpenters from ships that were abandoned in the Gold Rush by 49ers, sailors who jumped ship to look for their gold mine, that were in want of experience carpenters, who were not paid much. One citations said portable houses were built on the east coast where labour was cheap thanks to the Irish immigration. As to the idea that the Tanforan cottages were moved from Belmont to the Mission, after the San Francisco, consider ‘The Vans’ a structure that was moved to Belmont from San Francisco.

It is thought that the Tanforans built 214 and 220 Dolores as farm houses. 214 was built first, and 220 followed a year or so later.  The homes are simple frame structures with classic revival facades (an architectural movement based on the use of pure Roman and Greek forms in the early 19th century). Their false fronts, full width porches with square posts, and four-over-four window sashes (four panes of glass on the top frame and four panes of glass on the bottom frame of a double hung window) are common features of the 1890s. The deep-set backyard, another feature of that era, holds a carriage house that contained a Tanforan-owned carriage until 1940.

The houses were originally inhabited by the Tanforans’ daughter Mary and were handed down from sister to sister until 1952. It is not known if Torbio and Maria ever lived in them. They both died in San Francisco in 1884 and were buried in Mission Dolores; the home address listed on their obituary was Well Street.

In the 1860’s, SF had its first amusement park just two blocks away. Located at 16th and Valencia, it was called “The Willows” and its prize exhibit was a Emu. That inspired one of Bret Harte’s early verses (not very well known but maybe better so).

“O say, have you seen the Willows so great,
So charming and rurally true,
A singular bird, with the manner absurd,
Which they call the Australian Emu?”

Well, maybe you had to be there.

The houses were originally inhabited by the Tanforans’ daughter Mary and were handed down from sister to sister until 1952. It is not known if Torbio and Maria ever lived in them. They both died in San Francisco in 1884 and were buried in Mission Dolores; the home address listed on their obituary was Well Street.

The site that The Shops at Tanforan mall is built on has a rich history. Prior to its reincarnation as a shopping center, Tanforan once also served as a racetrack, at various times as an airfield, a military training center, an internment camp, as well as a golf course.

The Tanforan Racetrack was built in 1899. It was named after Toribio Tanforan, the grandson-in-law of Jose Antonio Sanchez, the grantee of Rancho Buri Buri.[citation needed] Horse, dog, motorcycle, and auto races were held year round at the track. One of Tanforan’s most famous residents while it was used as a racetrack was Seabiscuit, who was stabled there for a time.[4] Today, a statue of Seabiscuit may be found on the grounds of the Tanforan mall.

The site found other uses after 1909, when the state of California banned all gambling at racetracks.[

The Willows, a popular resort “out in the country” in the Mission District, in the 1860s. It was near today’s 18th and Mission, and the willows of its name are growing around the now-buried Mission Creek.

August 18, 1861 I purchased some clothes, as I am about as seedy as I ever was in this life. Was busily employed all the morning in my room, showing [silver] specimens and talking of Mexico. In the afternoon I went to the Willows and spent an hour in looking at the crowds who spend their pleasant times in that beautiful retreat. It is 3 miles from the city by rail, and Sundays the cars run every 15 minutes, and are crowded with happy faces going and returning from this really beautiful place for recreation. It is beautifully fitted up with books and machinery for amusement for the children, and shooting, and innocent games for the grownups.