Jesus and Mary on the Isle of John 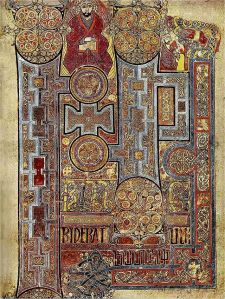 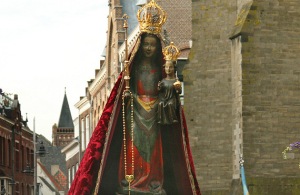 The trouble I have, is that I can point to my kin in Renaissance paintings worshipping Our Lady, and alleged Black Madonnas, who some say are the embodiment of ISIS. If I would just come-off like a scholar like most authors of the Holy Blood, then I could sell books and send my daughter money for my grandson. As it is, my daughter is embarrassed by me, she and her friends believing I am insane – and dangerous.

Here is a site that claims this dude, John, descends from Jesus and Mary Magdalene who lived on the Isle of Iona.

Consider the Oera Linda take on Iona, and Jon/Jan the sea king, who rebels against Rosamond, the Folk-mother. The Isle of Iona (Jon) looks like the channel island where my grandmother, Mary Magdalene Rosamond, camped with her husband whose ancestors came from Holland.

I am done with folks who have done all they can to ruin my beautiful story, especially Rena, who lived on the Isle of Wight. She took a turn that took her away from me – and a wondrous story!

The Scottish literary writer, William Sharp (using the pseudonym Fiona MacLeod) in his essay Iona (1900) refers to “the old prophecy that Christ shall come again upon Iona.” This presupposes that Christ had already visited Iona according to an ancient oral tradition. Curiously, just 80 miles due north of Iona is to be found another small Hebridean island, located in Dunvegan Bay, off the west coast of the Scottish Isle of Skye. It is called Eilean Isa (currently spelt Isay) which translates from the gaelic as the “Island of Jesus”. Isa is the Middle Eastern arabic name for Jesus, whereas His name in gaelic is Iosa. So why do we find the appellation of this island with the arabic spelling rather than the gaelic? Interestingly, there are no religious sites on Eilean Isa or anything to suggest that it’s name was conceived from a religious dedication. During the early centuries A.D. a placename was often given to record the actual presence and sanctification of a specific place by the early Celtic Christian monastic saints who were seen as holy men and women. So it could be conjectured that the “Island of Jesus” was so named as a result of it being sanctified by the presence of Jesus Himself.
Furthermore, according to Christine Hartley, in her classic work The Western Mystery Tradition (1968): “There is a legend too that Mary Magdalene lies buried in Iona.” Writing about Mary Magdalene’s legendary association with Scotland, Hartley further says, “Wandering the hills of Scotland, she came to Knoydart.”

Professor Hugh Montgomery in his treatise The God-Kings of Europe: The Descendants of Jesus traced through the Odonic and Davidic Dynasties (2006) provides the interesting information, “John Martinus was believed in the early Christian Period to be the last son of Jesus by Mary Magdalene. In some versions he was born on Iona.” Curiously, as Christine Hartley has pointed out, the holy isle of Iona was also known as the Isle of John. Could this relate to the presence of the child of Christ, John Martinus, on Iona?  The Rev. J.F.S. Gordon in his book Iona, published in 1885, comments on “Cladh-an-Diseart, ‘Burial-ground of the Highest God’ called sometimes Cladh-Iain, ‘John’s burial-ground’

“At this time Rosamond the Mother, who had done all in her power by
gentle means to preserve peace, when she saw how bad it was, made
short work of it. Immediately she sent messengers throughout all the
districts to call a general levy, which brought together all the
defenders of the country. The landsmen who were fighting were all
caught, but Jon with his seamen took refuge on board his fleet,
taking with him the two lamps, as well as Minerva and the maidens of
both the citadels. Helprik, the chief summoned him to appear; but
while all the soldiers were on the other side of the Scheldt, Jon
sailed back to the Flymeer, and then straight to our islands. His
fighting men and many of our people took women and children on board,
and when Jon saw that he and his people would be punished for their
misdeeds, he secretly took his departure. He did well, for all our
islanders and the other Scheldt people who had been fighting were
transported to Britain.

Jon, John, Jhon, Jan, are all the same name, though the pronunciation
varies, as the seamen like to shorten everything to be able to make
it easier to call. Jon – that is, “Given” – was a sea-king, born at
Alberga, who sailed from the Flymeer with a fleet of 127 ships

Only in 1454th – in 1455 were Van Aken and his wife a member of the Brotherhood of Our Lady . In 1461 – 1462 kreeg hij de opdracht het door brand beschadigd retabel van dit Broederschap in de toenmalige Sint-Janskerk in samenwerking met de meester-schilder Claes van Schoonhoven te herstellen. In 1461 – 1462 he was commissioned damaged by fire altarpiece of the Brotherhood in the former St. John’s Church in collaboration with the master painter Claes Schoonhoven

The urban society was dominated by the canons of the church of St. John’s, a few families belonging to the regional gentry, the wealthy merchants and some of the craftguilds. Almost alldistinguished people were members of the brotherhood of Our Lady Mary, which by the way isstill existing. The brothers spent a lot of money on the decoration of their chapel situated to thenorth transept of the church of St. John’s. They also loved music and employed singers in order to brighten the services in the chapel and the succeeding banquets. This formed a counterweightto the absence of a court: ‘s-Hertogenbosch did not have a bishop nor a principal court. Thedukes only occasionally visited their town.

The Magdalene and the Madonna: The Restoration of the Divine Feminine

Dan Brown’s popular novel, The DaVinci Code, touched a deep chord in the human psyche, making a major contribution to the restoration of the story of the Divine Feminine in history and in the human heart. Hidden for millennia, the story of Mary Magdalene as the Bride of Christ and Mother of Jesus’ child, her womb the Holy Grail, the sacred vessel for Christ’s blood, is now known to millions. Today people are finding the Divine within themselves, choosing spirituality over religion, experience over dogma and doctrine.
In a world where information is instantly and widely available, and intuitive people routinely draw upon the universal field of energy for guidance and healing, our human and spiritual heritage will no longer remain hidden—whether purposely suppressed or lost through time. The Piscean Age of male, hierarchical control is giving way to the Aquarian Age of balance between the masculine and feminine principles. The world awaits a time of harmony, creativity, and peace that comes from this balance.
It is only fitting, then, that Mary Magdalene should become the iconic woman of this emerging age. Labeled a prostitute for centuries by a male hierarchy that denied a sexually active expression of divinity—making Jesus celibate and his mother a perpetual virgin—the Magdalene and her symbolic sister, the Black Madonna, are the first images of the sacred feminine in western culture to be reclaimed with full power given to their roles as wives and mothers.
In Egypt, the world’s most influential, advanced ancient culture, the role of the divine feminine was crucial to the primal story of cosmic order and disorder. When the god Osiris, brother-husband of the goddess Isis, was murdered by his brother, Set, the natural order was thrown into turmoil. To restore order, Isis searched for and reassembled Osiris’ essential body parts long enough to become pregnant, giving birth to the falcongod, Horus. The same mythic pattern, restoration of divine order by the male and female principles uniting to create new life, is repeated in the story of Mary Magdalene, Jesus, and their child. The figure of the Black Madonna, found in hundreds of churches and cathedrals in France and elsewhere in Europe, is typically a crowned queen seated on a throne, her child on her lap holding the scepter or globe of royal rule. Most often fashioned of dark wood, this representation is modeled on extant statues of Isis and Horus. While priests claim the Black Madonnas represent Mother Mary and Jesus, in France the legends of the people claim otherwise. To many it is Mary Magdalene, the Sacred Feminine, who sits on the throne, her child symbolizing the divine order restored.
In recent years I have seen and felt for myself representations of Mary Magdalene as Divine Bride and Mother. Her presence in the south of France is palpable, powerful, and deeply embedded in the culture. In Les Saintes-Maries-de-la-Mer, where Mary Magdalene, Jesus’ mother, aunt, and a dark child, supposedly an Egyptian servant, allegedly landed and remained for a time, the Black Madonna in the church crypt is named “Sarah,” the same name given in Brown’s novel and other sources to Jesus’ and Mary Magdalene’s daughter. I observed two women reverently dressing this Sarah in a new royal blue robe, kissing her cheek and offering prayers of petition to the heart of the feminine divine. While I watched, dozens of people lit candles, kissed the figure, and gazed on her with devotion.
Similar devotion is paid to each Black Madonna. The one in the Lady Chapel in Chartres Cathedral is one of the most beautiful and revered. I felt the strength and power of the loving energy around her, contained within this magnificent monument to Divine Love built by the Knights Templar, guardians for centuries of the Holy Grail, the secret of the Divine Feminine who one day would be restored to her rightful place, the Bride beside the Groom. When restored, the sacred, creative powers continually bless and renew life on Earth and throughout the cosmos. As long as they remain together, balancing their energy and offering it in love to the world, all is well. Rain falls, rivers flow, crops grow, animals and humans give birth—the cycles of creation continue undisturbed. But take away the Divine Mother, and the world becomes a desert wasteland, a violent expression of a domineering male principle. Wholeness and balance can only be restored when she is acknowledged and empowered as Queen and creates with her King new life that re-enchants the world.
As we acknowledge and honor the Divine Feminine, we give power not only to her but also to ourselves, contributing to the restoration of wholeness and well-being on the planet we call home.