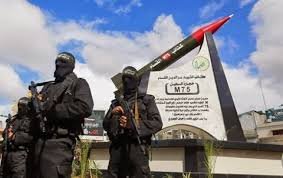 Hamas erected a rocket monument. On June 30 I discuss the apocalyptic art of Mary Ann Tharaldsen. Three Israeli boys are found dead on this day. Consider Mary and Jesus’ flight into Egypt and the Exodus from Syria. I believe Pynchon is a Secular Prophet, and atheist, who never- the-less came to own a vision of the future. I believe Pynchon gives credit to the mess the world is in to Big Brained People, and thus only other Big Brained People, or person, can get us out of this pickle. There is no God, only Luck. For this reason if less than 777,777 people fail to solve the New York Times crossword, the world comes to an end.

Pynchon does not want to give any credit to Stupid People who subscribe to Stupid Religions, thus he has a sinister postal system undermining the American system. Here is a Big Brained Dude gone awry. Sin means “missing the mark”.

Above is a photo of me dressed as Uncle Samaclaus at a OCCUPY meeting. I am telling folks to take over the Post Office. I can make a very case that my kindred were members of the Priory de Sion, without having to believe there is such a thing. However, the Priory de Sion Postal Service
is that much more of a possibility in Pynchon’s Universe, that does exist, it full of books and writers who spew out thousands of words like burning rocket fuel, I now a member of the club, the only one who knows a lick about the Bible, thus I may not be attached to the tail of Tom’s comet, but instead, I am the warhead…..The Punch delivered from God!

The name that is not being named here is that of the sinister, ubiquitous Tristero, a subterranean league of couriers who have been fighting monopolies of communication since the Middle Ages. Transplanted to America, they have wrought havoc with Wells Fargo, and continue to subvert and circumvent the US Postal Service. The Tristero system is used by countless Americans who have no knowledge of its meaning or history, people who have dropped out of the official network for all kinds of reasons, charmed by the stealth and the stubbornness of the counter-couriers.

The closing of our Post Offices is more of Margaret Thatcher’s crusade to Privatize America so British and American Bankers can play roulette with our tax money.
Please join my yahoogroup and help make a statement and stand!

Thomas Pynchon’s postmodern fiction Gravity’s Rainbow (1973) repre­sents an apocalyptic space at once historical, imaginative, theoretical, and “fabulously textual.”1 Apocalyptic space is always textual, but never more so than in the American script. For the Puritan settlers, historical space was textualized because the experience of the New World had been typologically prefigured in the Bible. When the Puritans fled persecu­tion, they repeated Exodus: America was the “New English Canaan.” But the Bible provided more than just textual types to be enacted or repeated in history; the biblical mythos completely engulfs history providing an account of primal origins and visions of the end. In the absence of either millennial or cataclysmic fulfillment, however, Puritan space remained the space of signification, where more discourse would predict, invoke, envision, explain, rationalize, or reevaluate the absence or imminence of apocalyptic fulfillment.

Such is one vision of the negative pole of apocalypse in which the typological fulfillment of history is just another name for the endless series of acts of imperialism. But apocalypse means revelation, and al­though apocalyptic discourse aims to define, contain, and domesticate otherness, it also serves to reveal the other. It is this revelatory or irreducibly prophetic dimension of apocalyptic discourse that prevents its perfect coalescence with any particular historical, political, or institutional man­ifestation. Apocalyptic discourse is usually profoundly hostile to the status quo. Its meanings and referents always exceed what “is” and point toward what is “other” than what is, and this other dimension can be a source of prophetic hope of liberation: projected wish reflected back as the possibility of salvation.

Weissmann, to return to my example from the diegesis of Gravity’s Rainbow , perceives the trajectory of death into which Western culture is locked and to which, as an SS officer, he contributes. But he desires to be something more than a functionary in this destructive apocalyptic my­thos; he desires to escape the repeated patterns of conquest and em­braces a more radical apocalyptic hope for a kind of dark transcendence: “ ‘I want to break out— to leave this cycle of infection and death. I want to be taken in love: so taken that you and I, and death, and life, will be gath­ered, inseparable, into the radiance of what we would become. . . (724). He makes this “creative” affirmation at the moment just prior to the launching of a V-2 rocket, which he has specially modified to contain his lover, Gottfried, whom he is addressing. This launch is the culminat­ing gesture in a relationship that has included sadomasochistic rituals — rituals that function to domesticate or master the larger horrors of the expanding deathkingdom that surrounds them. This launch presumably (and quite irrationally) will deliver them from the oppressions of the “real” into an “other” sort of hyperreal apocalyptic space. Gottfried seems to understand Blicero’s desperate hope for salvation as he listens silently: “This is so more-than-real … he feels he must keep every word, that none must be lost. Blicero’s words have become precious to him. He understands that Blicero wants to give, without expecting anything back, give away what he loves. He believes that he exists for Blicero, even if the others have all ceased to, that in the new kingdom they pass through now, he is the only other living inhabitant” (721-722). Beyond the repeated gestures of choreographed sex and violence, Gottfried has