Irving Needs To Be Fixed Some More!

More recently, Tsai claimed Irving still has “more work to do” before returning to the court. Brown tweeted his displeasure with Tsai’s comments, and expanded on those feelings Monday night in Boston.

“Tsai’s response was alarming to me.” Brown said “He didn’t say that the organization was working together to get Kyrie back on the floor. He said that Kyrie had more work to do. And as vice president of the players union, it’s part of my job to protect our players legally.”

This is sounding like Crypto 1984, where Big Athletic Brother sends the Thought Police to Arenas and arrests players who are still guilty of thought crimes – against Jews! A rat is strapped to their face at the Ministry of Cryptocurrency to mentally readjust players so their THINKING does not topple the Fragile Bit Coin Market – and it all come tumbling down. Being suspected of antisemitism is The Moral Glue that keeps the house of crypto cards – standing! This is the Age of The Second Shunning of Jesus – the Jewish All-Star that was not recognized by his own people.

A Secret Police Force has been created overnight around Kyrie, who is now a character out of Kafka’s The Trial. .In the scene above we see workers at the Cindy Coin plant stamping out coins with images of Most Favored Sneaker People on them. About 6,666 people – are not stamped Very Special in the United States. One of them – is a Jew!. He is the Messiah, but will never be discovered in all The Fakery – which is the fear many Bible Folks – have! This is why the Republicans are besides themselves with glee that they took over the Congress so they can conduct tribunals against the Messiah Hiders.

Study what happened to the Canaanites who allegedly descend from Ham.

“The biblical history has become increasingly problematic as the archaeological and textual evidence supports the idea that the early Israelites were in fact themselves Canaanites.”

“Brown was asked about what he thought would signal contrituion and growth from Irving. Brown for his part suggested this was “uncharted territory” for the league and PA.”

The name “Canaan” appears throughout the Bible, where it corresponds to “the Levant“, in particular to the areas of the Southern Levant that provide the main settings of the narratives of the Bible: the Land of Israel, Philistia, and Phoenicia, among others.

The word Canaanites serves as an ethnic catch-all term covering various indigenous populations—both settled and nomadic-pastoral groups—throughout the regions of the southern Levant or Canaan.[3] It is by far the most frequently used ethnic term in the Bible.[4] The Book of Joshua includes Canaanites in a list of nations to exterminate,[5] and scripture elsewhere portrays them as a group which the Israelites had annihilated.[6][7] Biblical scholar Mark Smith notes that archaeological data suggests “that the Israelite culture largely overlapped with and derived from Canaanite culture… In short, Israelite culture was largely Canaanite in nature

Canaan and the Canaanites are mentioned some 160 times in the Hebrew Bible, mostly in the Torah and the books of Joshua and Judges.[95] The biblical history has become increasingly problematic as the archaeological and textual evidence supports the idea that the early Israelites were in fact themselves Canaanites.[95] While the Hebrew Bible distinguishes the Canaanites ethnically from the ancient Israelites, modern scholars Jonathan Tubb and Mark S. Smith have theorized—based on their archaeological and linguistic interpretations—that the Kingdom of Israel and the Kingdom of Judah represented a subset of Canaanite culture.[8][9]

In the Hebrew Bible an ancestor called Canaan first appears as one of Noah‘s grandsons. He appears during the narrative known as the curse of Ham, in which Canaan is cursed with perpetual slavery because his father Ham had “looked upon” the drunk and naked Noah. The expression “look upon” at times has sexual overtones in the Bible, as in Leviticus 20:11, “The man who lies with his father’s wife has uncovered his father’s nakedness…” As a result, interpreters have proposed a variety of possibilities as to what kind of transgression has been committed by Ham, including the possibility that maternal incest is implied.[96] 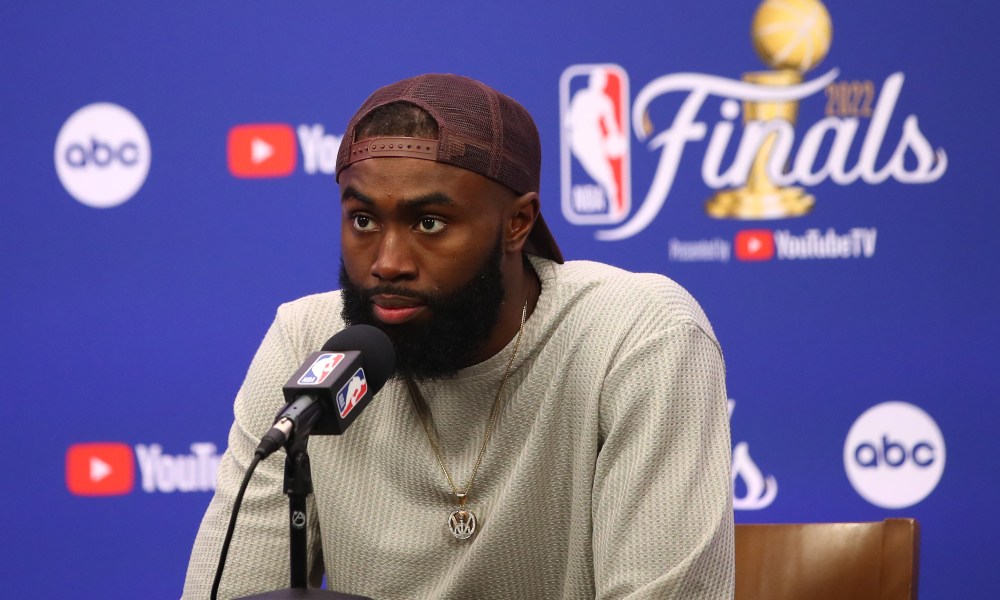 Following the Boston Celtics’ victory over the Oklahoma City Thunder, Celtics star Jaylen Brown was asked about his apparent criticism of Net’s owner Joe Tsai and the handling of the on-going suspension levied against Brooklyn’s Kyrie Irving. Brown re-stated his concern with the length and parameters of the punishment during a postgame press conference.

Brown serves as vice president for the the player’s association and is Irving’s former teammate. He has been vocal with his support for a fair and clear pathway for Kyrie’s return to the court amid a suspension that is lacking in a clear timeline.

A few weeks ago Irving shared a misleading and antisemitic documentary to his Instagram page, and was ultimately suspended by the Nets following a string of adversarial press conferences. Irving has since apologized for his behavior, saying, “to all my Jewish families and communities that are hurt and affected from my post, I am deeply sorry to have caused you pain, and I apologize.”

The Nets announced Irving would miss several games and would need to complete a series of steps in order to be reinstated by the team, including sensitivity training and meeting with Jewish leaders.

More recently, Tsai claimed Irving still has “more work to do” before returning to the court. Brown tweeted his displeasure with Tsai’s comments, and expanded on those feelings Monday night in Boston.

“Tsai’s response was alarming to me.” Brown said “He didn’t say that the organization was working together to get Kyrie back on the floor. He said that Kyrie had more work to do. And as vice president of the players union, it’s part of my job to protect our players legally.”

Later in the press conference, Brown reiterated his chief concern is with a perceived lack of clarity and the overall process governing the Nets’ decisions.

“The terms that Brooklyn has instituted for his return, I’ve already voiced my discomfort.” Brown said. “Some of our players, some people in the media, have voiced some of their discomfort with that. We’ve yet to hear, what is the latest with that situation? It’s still an indefinite suspension. Kyrie’s already missed five or six games.”

Brown was asked about what he thought would signal contrituion and growth from Irving. Brown for his part suggested this was “uncharted territory” for the league and PA.

“I think if you are asking for need to say something to the common public,  I’m not sure if that is something that Kyrie is looking to do.” Brown said.

“I don’t think he meant any harm by posting it. Obviously it came off as insensitive to a lot of people. But Adam Silver came out with a statement saying he doesn’t believe Kyrie Irving is anti-semitic. Joe Tsai came out and said in a statement that they don’t believe he is anti semitic. Those were their words. He already apologized.”

Brown did hint there were more than a procedural elements to his specific concerns. During the press conference, he made mention of broader systems within the NBA and beyond that needed to be considered when trying to understand the situation.

Brown largely stuck to commentary regarding the vagueness of any possible return to action for Irving and suggested Tsai’s assessment of Irving was unclear.

As one of the union’s most vocal leaders, Brown grounded his criticisms and concerns in his role as a vice president in the NBPA.

“This is our league.” Brown said. “We are all basketball players, but we all are human beings as well. So I’m looking forward to seeing the union and NBA figure out what the next steps are.”

Archaeologists made the hair-raising discovery several years after unearthing a hair comb, which they found in 2016 at an Israeli archaeological site called Tel Lachish, located south of Tel Aviv. The site was once a city inhabited by the Canaanites, who lived in what is now Syria between 3500 B.C. and 1150 B.C., during the Bronze Age.