The Curse of Ham and Election Deniers

“Voters in the six major battlegrounds where Donald Trump tried to reverse his defeat in 2020 rejected election-denying candidates seeking to control their states’ election systems this year, a resounding signal that Americans have grown weary of the former president’s unfounded claims of widespread fraud.”

“This past year, AIPAC endorsed 109 of the 147 Republicans who refused to affirm President Joe Biden’s election on Jan. 6, 2021. The exit poll found that 72% of Jewish voters disapproved of AIPAC endorsing and fundraising for candidates who voted against certifying the election.”

How ANGRY is AIPAC with Black Voters – who defeated their candidates – and upset their mission? Why should American Voters BE DEVOTED TO A FOREIGN NATION? What is the price for being DISLOYAL TO ISRAEL?…….You are called a thief, and, your candidates not allowed to take office?

I have been doing allot of research in the last two days. I just heard Trump tried to weaponize the IRS so he can manipulate his enemies into doing his bidding. This is EXTORTION! If proven – he should be arrested. What I am looking at is how much involvement did Non-American Jews have in our elections, last year, and this? How many foreign Jews supported the Insurrection?

Now to the Curse of Ham! I just found out Noah got drunk, and his sons beheld his nakedness. All the sons but Ham – looked away – and he was turned into the black race. Lot’s daughter beheld their father’s nakedness – while he was drunk. They begot his children. Then….Sodomy is involved. What I am looking at, is, THE ORIGINAL SIN is the father getting drunk, then getting an errection, then, trying to have intercourse with his male and female children. Is this why John and Jesus are Nazarites – who abstain from wine?

My theory has just cleared Eve on any wrong doing. Is there Biblical permission for Jews to have sex with their male and female slaves? Moses married a Kushite woman, a black woman. Is this true? Is this way to negate the FULL laws of Moses – because there is no cure for alcoholism/ Drunken Dads, will be drunken Dads!

For foreigner to conspire to overthrow the United States Government is……ESPIONAGE! Would I be guilty of anti-Semitism to suggest Israel would want to study all the Top Secret Documents our Government has compiled on the Chosen Land of God’s Chosen Children?

The Jewish author of this article criticizes the AIPAC – after he goes after Kyrie Irving – and then Donald Trump. How many American Jews would want their enemy to get a hold of their secret tax statements? Would that make Jews in Israel nervous – too! We are a shame-based world. Trump is a SPY. Is he a Jew because his son-in-law is a Jew? Does Kirchner and Ivanka own Dual-Citizenship?

The U.S. Jewish community has strained in the past few months under a barrage of antisemitic attacks from multiple directions: the rap artist Ye, Brooklyn Nets guard Kyrie Irving and even former President Donald Trump.

The poll also showed a deep disapproval of AIPAC, the American Israel Public Affairs Committee, a group that backs pro-Israel candidates, both Democratic and Republican.

This past year, AIPAC endorsed 109 of the 147 Republicans who refused to affirm President Joe Biden’s election on Jan. 6, 2021. The exit poll found that 72% of Jewish voters disapproved of AIPAC endorsing and fundraising for candidates who voted against certifying the election.

The American Israel Public Affairs Committee (AIPAC /ˈeɪpæk/ AY-pak) is a lobbying group that advocates pro-Israel policies to the legislative and executive branches of the United States.[4] One of several pro-Israel lobbying organizations in the United States,[5] AIPAC states that it has over 100,000 members,[6] 17 regional offices, and “a vast pool of donors”.[7] Representative Brad Sherman (D–California) has called AIPAC “the single most important organization in promoting the U.S.-Israel alliance”.[8] In addition, the organization has been called one of the most powerful lobbying groups in the United States.[7]

The American Israel Public Affairs Committee, or AIPAC, was founded in 1951 by Isaiah L. Kenen.[17] Kenen originally ran the American Zionist Committee for Public Affairs as a lobbying division of the American Zionist Council. Before that, Kenen was an employee of the Israeli Ministry of Foreign Affairs. According to journalist Connie Bruck, AIPAC was incorporated in 1963[18] and headed by Kenen until he retired in 1974. Kenen was “an old-fashioned liberal,” according to former AIPAC volunteer journalist M.J. Rosenberg, who did not seek to win support by donating to campaigns or otherwise influencing elections, but was willing to “play with the hand that is dealt us.”[18]

American Jews have strained in the past few months under a barrage of antisemitic attacks. Fears for democracy were first on their minds. 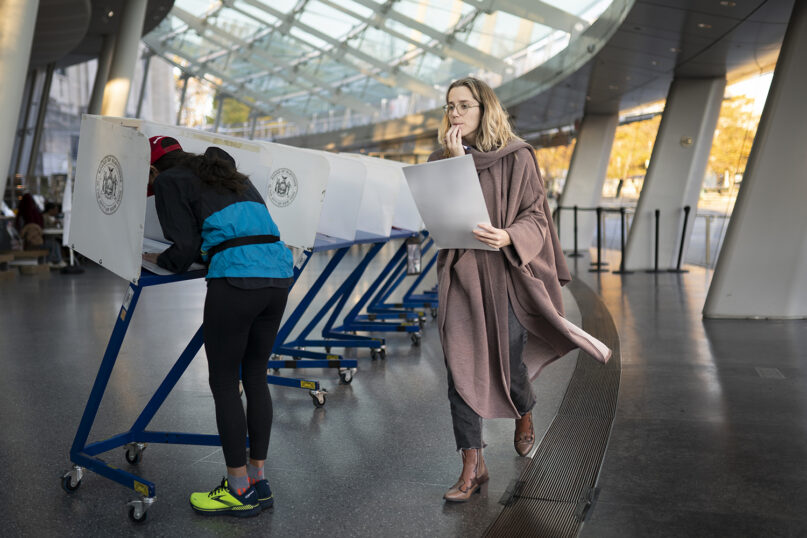 A voter moves to cast her ballot at an electronic counting machine at a polling site in the Brooklyn Museum, Nov. 8, 2022, in the Brooklyn borough of New York. (AP Photo/John Minchillo)

(RNS) — For many American Jews, the midterm election results brought a collective sigh of relief when Doug Mastriano, the Republican nominee for governor in Pennsylvania, lost his race, defeated by Josh Shapiro, the state’s attorney general and a fellow Jew.

The U.S. Jewish community has strained in the past few months under a barrage of antisemitic attacks from multiple directions: the rap artist Ye, Brooklyn Nets guard Kyrie Irving and even former President Donald Trump.

Mastriano seemed most frightening of all: A pro-Trump Christian nationalist (though he dismissed the label) and 2020 election denier, the state senator from Gettysburg had shown himself to be intolerant of religious minorities and his campaign had paid an antisemitic right wing activist as a consultant.

As in the past, Jews across the country voted overwhelmingly for Democratic candidates — 74% to 25%, according to a new exit poll of 800 registered Jewish voters sponsored by the pro-Israel group J Street. But this year their votes were as much against something or someone — as in the case of Mastriano. The J Street poll showed that a whopping 97% of American Jews said they were concerned about antisemitism.

They also laid the blame for rising antisemitism at the feet of Trump and the Republican Party. The poll, conducted Nov. 1-8, found that 76% of Jews believe Trump and his Republican allies are directly responsible for the rise in antisemitism and white supremacy in the United States. On another question, 74% of U.S. Jews said Trump and the “Make America Great Again” movement are a “threat to Jews in America.”

“There is a new element of the Jewish vote that takes place in the aftermath of Charlottesville and Jan. 6 attack on the Capitol and the high-profile antisemitism taking place in the country right now,” said Jim Gerstein, founding partner of GBAO Strategies, which conducted the poll for J Street. “It frightens people and introduces a new dynamic.”

Last month, the former president attacked American Jews for being insufficiently supportive of him. “Wonderful Evangelicals are far more appreciative of (Trump’s record on Israel) than the people of the Jewish faith, especially those living in the U.S.,” Trump said.

In the poll, 55% of Jews cited concern for democracy as their top issue. The second most important issue on Jewish voters’ minds in this year’s midterms was abortion — 40% said it led them to vote.

“I’ve never seen a single event transform an election the way I saw the Dobbs decision transform this election, with the exception of 9/11, which transformed the 2002 election,” Gerstein said, referring to Dobbs v. Jackson, the Supreme Court case that found that the Constitution does not grant a right to an abortion.

Jewish tradition permits abortion and sometimes even requires it, when the life of the pregnant person is at risk. Jewish leaders across the spectrum have decried growing restrictions on abortion. On Wednesday, about 100 rabbis from the Conservative Jewish movement gathered in a St. Louis park to protest that state’s ban on abortion.

Members of the Orthodox Jewish community cast their ballots at a polling center Nov. 8, 2022, in the Brooklyn borough of New York. (AP Photo/Wong Maye-E)

In Tuesday’s midterms, the overwhelming majority of Jewish candidates for Congress or for state governorships were Democrats. One exception, Lee Zeldin, a Republican congressman from New York who ran for governor, lost.

Orthodox Jews, who make up about 9% of the U.S. Jewish population, are an outlier when it comes to Democratic Party allegiance. Of the 25% of Jewish voters who cast their votes for Republican candidates, self-described Orthodox Jews represented the vast majority.

But even among this group there were fractures.

In an unusual rebuke one day after the election, an influential Haredi rabbi from Orange County, New York, called out his fellow Orthodox Jews for their uncritical support of Trump.

Rabbi Aaron Teitelbaum of the Satmar sect in Kiryas Joel, about 60 miles north of New York City, told students in his yeshiva that Trumpism has twisted the minds of many Jews. “It brainwashed people — and that’s so painful,” Teitelbaum said.

Unlike many other Haredi Jews in New York, Teitelbaum threw his support behind Democratic New York Gov. Kathy Hochul, who won the election.

The poll also showed a deep disapproval of AIPAC, the American Israel Public Affairs Committee, a group that backs pro-Israel candidates, both Democratic and Republican.

This past year, AIPAC endorsed 109 of the 147 Republicans who refused to affirm President Joe Biden’s election on Jan. 6, 2021. The exit poll found that 72% of Jewish voters disapproved of AIPAC endorsing and fundraising for candidates who voted against certifying the election.

“The Jewish community continues to be a consistent center-left voting community, said Jeremy Ben-Ami, J Street’s president. “Most importantly, it is a community deeply concerned about democracy.”

The poll had a margin of error of plus or minus 3.5 percentage points.