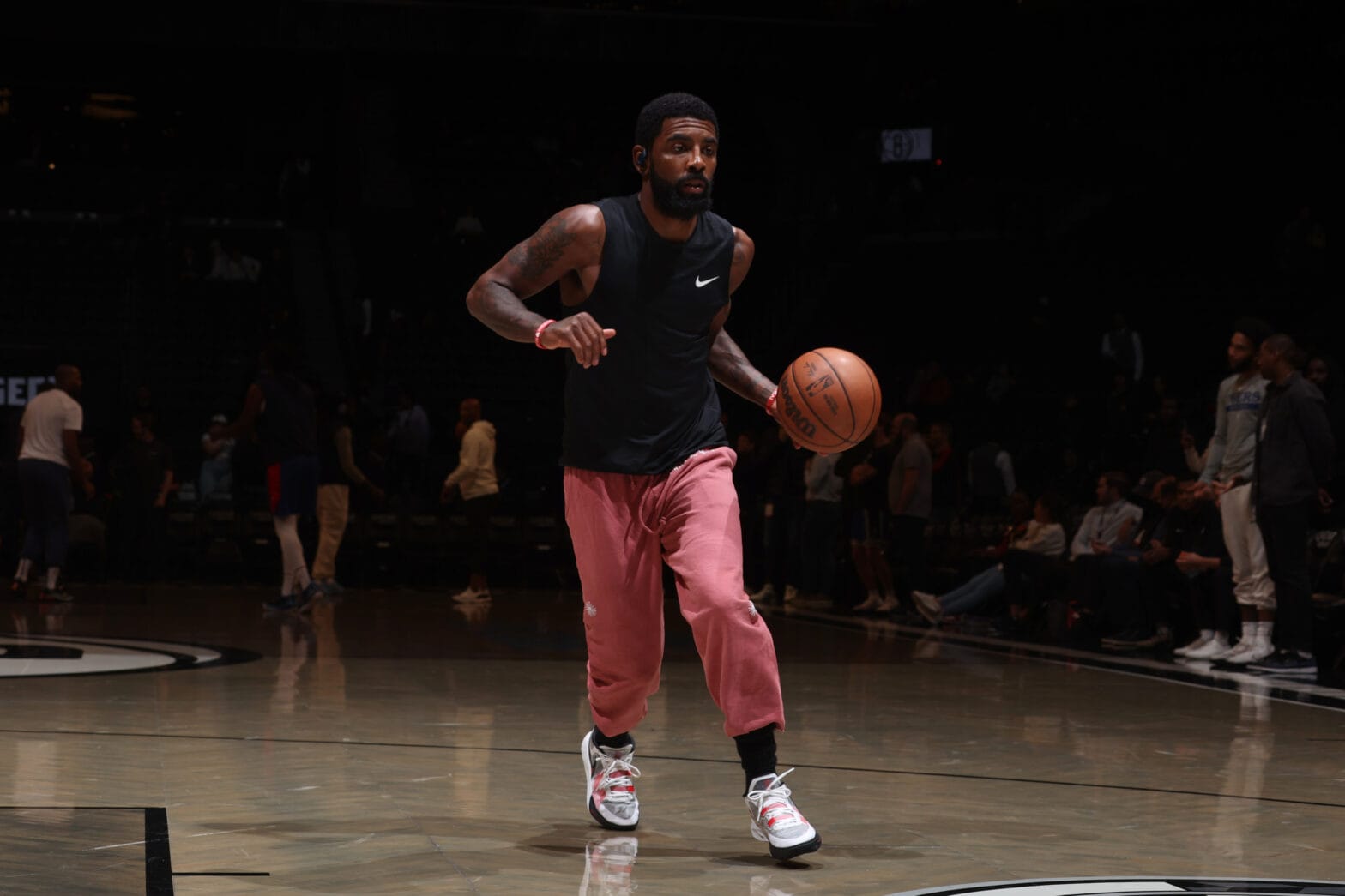 Kyrie Irving signed a deal with Nike in 2011 reportedly worth at least $11 million a year.

“Kyrie stepped over the line. It’s kind of that simple. He made some statements that we just can’t abide by and that’s why we ended the relationship. And I was fine with that.”

Phil Knight – The Great Supporter of the Ducks – does not know much about Jewish History, nor do most Jewish Historians. Why is that?

“Because of the paucity of other sources, Josephus’ works are the most thorough histories of the period that we have. So long as we retain some skepticism, his writings provide the greatest insight into what happened to the Jewish people during that five hundred year period.“

WHAT? Who managed to wipe out five hundred years of Jewish History? You would think God would have helped His Chosen People keep good historic records like He does for members of His beloved Republican Party. Josephus does not mention Jesus, and briefly writes about John the Baptist. Phil Knight may have contributed more Jewish History, that is now STORED in the history of the NBA! Who’s going to look for it – there?

I think THE ITALIANS played a big role in destroying Jewish History – starting with the Roman Emperors – and sustained by the Vatican. Why didn’t Knight consult the History Department at the UofO before he RULED on the fate of a Black Man who he says “Crossed the line” What line?

Our REAL President, who beat The Anti-Democracy Election Deniers, just landed in Egypt. President Zelenskyy, a Jew, just took Kershon, causing the Russian Army – to retreat! Marjorie Taylor Greene promised to DEFUND the Ukraine Freedom Fighters – who owe much to Black Democrats. They are concerned the Republicans will DESTROY them with the help of Orthodox Jews who wish Black Voters were Orthodox Jewish Voters, so the United States would destroy all the enemies of Israel – that is not backing the Ukrainians – enough. Did you know it is a sin to count the Jews?

I will be posting on Phil Knigh’ts backing of Betsey Johnson, next. Looks to me Phil Knight is caught up in the War of Armageddon – and he REALLY crossed the line!

Israel faces pressure internally and externally to support Ukraine more forcefully. A strong majority of Israelis—76 percent—support Ukraine in the war. Israel has seen multiple pro-Ukraine rallies, including an early March gathering in Tel Aviv that drew thousands. Demonstrators also protested outside of the Russian embassy and the prime minister’s residence in Jerusalem.

Meanwhile, Zelenskyy, typically effusive in his praise of Bennett and Israel, has at times been critical, calling on the state to do more to support Ukraine. The Joe Biden administration has supported Israel’s mediation efforts. It has also acknowledged Israel’s security concerns while at the same time encouraging the state to take stronger positions. Most notably, U.S. Undersecretary of State for Political Affairs Victoria Nuland, discussing the many Russian Jewish oligarchs that have sought refuge in Israel, told Israel’s Channel 12, “You don’t want to become the last haven for dirty money that’s fueling Putin’s wars.”

MYKOLAIV, Ukraine —  Ukrainian forces swept into the key southern city of Kherson on Friday, hours after Russia said its military had completed a rapid retreat from the area — a humiliating setback for President Vladimir Putin and a major development in the war.

As jubilant civilians flocked to the city’s central square to greet advancing soldiers, Kyiv said its forces were taking control and warned any remaining occupying troops to surrender.

Flavius Josephus (a.k.a. Joseph ben Matityahu in Hebrew) was a Jew who grew up in Jerusalem at the beginning of the Common Era. He was well educated, knowing both Jewish texts and the Greek language (although his Greek grammar was faulty). During the Great Revolt from 66-73 CE, Josephus served as a general of the Galilee. When the Roman army overcame his forces, Josephus and 40 compatriots fled to a cave. They agreed to commit suicide. Josephus fixed the lots so that his name would come out last. After the others killed themselves, Josephus convinced the remaining fighter to surrender with him.

As a prisoner of the Romans, Josephus volunteered to write the history of the Great Revolt. General (later Emperor) Vespasian agreed. In The Jewish War, Josephus thus provided the Romans (and now us) with a first-hand account of the fall of Jerusalem in 70 CE. It must be emphasized that Josephus was writing for Vespasian – he was also writing from Rome – so his work is definitely biased. He mentions several times in his Greek writings that he created an Aramaic version of the events as well, but unfortunately, it is not extant.

Josephus’ second major work, Jewish Antiquities, described the entire history of the Jews. It included a great deal of material from the time of Alexander the Great to the destruction of the Second Temple. However, because of Josephus’ proclivity to depend on hearsay and legend, scholars are never sure what to accept as fact.

The Greco-Roman period involved the most changes in Judaism. It is also the most obscure to historians. We don’t know a great deal about Jewish history from the time of Alexander the Great until the Bar Kochba Revolt. Our sources are few. They include:

1. Brief incidents in the New Testament

2. Brief references by the sages in rabbinic literature

4. Some brief mentions by Greek and Roman writers

Because of the paucity of other sources, Josephus’ works are the most thorough histories of the period that we have. So long as we retain some skepticism, his writings provide the greatest insight into what happened to the Jewish people during that five hundred year period.

“Kyrie stepped over the line. It’s kind of that simple. He made some statements that we just can’t abide by and that’s why we ended the relationship. And I was fine with that.”

That was Nike co-founder and chairman Phil Knight, making his first public comments about severing the athletic apparel giant’s business deal with Brooklyn Nets basketball star Kyrie Irving during an interview with CNBC.

And their relationship is “likely over,” he said.

Nike announced last Friday that it has “suspended” its relationship with Irving, and scraped plans to release his next signature shoe, after Irving tweeted a link to a film containing antisemitic material

The Nets suspended Irving for at least five games without pay after he “refused to unequivocally say he has no antisemitic beliefs” during a recent press conference.

“I would doubt that we go back” to revisiting a deal with Irving in the future, Knight said in the interview. “But I don’t know for sure.”

Irving first signed with Nike in 2011 when he joined the NBA , and scored his first signature shoe in 2014. His annual endorsement earnings from Nike were worth at least $11 million, ESPN reported.

This is not the first time that Irving has been at risk of losing a significant amount of money due to his off-court behavior. Irving forfeited more than $13 million in his Nets salary for refusing to get vaccinated against COVID-19 in 2021, according to data from Spotrac. Irving suggested the number was much higher while speaking at a Nets media day in September, however. “I gave up four years, $100-something million deciding to be unvaccinated,” he said.

Read more: Kyrie Irving says he lost $100 million because he decided not to get vaccinated

“We look at who we sign and how much we pay and we look not only at how good the athlete is but what his or her character are,” Knight said. “It’s not an exact science, but it’s a process that we go through with a lot of intensity and with a lot of people sticking their hand in it.”