For over a year I’ve wondered if Putin is reading my blog – and reacting! What other news media – GOT IT RIGHT – that there is a Mind Game to be played? Biden has joined in.

‘I did that on purpose’: Putin’s bizarre joke about nuclear armageddon

Vladimir Putin has appeared to make a joke about nuclear war after being asked about comments he made in 2018 suggesting that Russians would ‘go to heaven as martyrs’ while everyone else would ‘just drop dead’.

The Russian President’s light-hearted response was shared on Twitter by the BBC’s Francis Scarr, who tweeted: “There aren’t many things less funny than Vladimir Putin attempting to joke about nuclear war.”

Putin was appearing at the annual Valdai Discussion Club, where he was asked about comments he made at the same venue in 2018, in which he said Russia was ready to “annihilate” any attacker who would use nuclear weapons against it, but would never strike first.

At the time he said: “An aggressor should know that vengeance is inevitable, that he will be annihilated, and we would be the victims of the aggression. We will go to heaven as martyrs, and they will just drop dead. They will not even have time to repent for this.”

The video clip showed an interviewer saying to Putin: “We became a little nervous recalling your comments at this very event four years ago, that ‘we’ll all end up in paradise’. We’re not in a hurry are we?”

Putin pauses – apparently for comic effect – sparking laughter from the audience, and prompting the interviewer to add: “You’re thinking. That in itself is somehow alarming.”

Putin then adds: “I did that on purpose to alarm you”, chuckling in amusement before adding: “The effect has been achieved”.

His appearance at the event in Moscow came a day after a huge military exercise on Wednesday that Russia said it was using to simulate “delivering a massive nuclear strike” in response to an enemy attack.

The annual exercise – involving nuclear submarines, strategic bombers and ballistic missiles – following unfounded allegations by the Kremlin that Ukraine is planning to use a “dirty bomb” to escalate the situation.

Watch: Putin shows no regrets as war rages in Ukraine 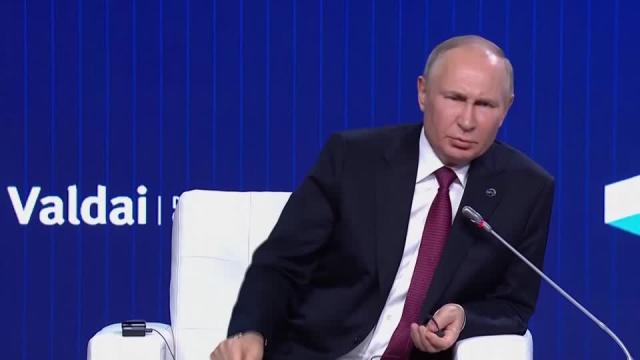 Putin shows no regrets as war rages in Ukraine

STORY: During a three and a half hour Q&A session Thursday, Russian President Vladimir Putin showed no regrets over his war in Ukraine, insisting that the “special military operation” was achieving its goals, and the West’s dominance over world affairs was coming to an end. “World domination is what the so-called West bet on in its game, but that game is, without doubt, a dangerous, bloody and, I would say, filthy one. It’s one that denies the sovereignty of countries and nations, their distinctiveness and uniqueness, disregarding the interests of other states.” Taking questions from audience members who lavished him with praise, Putin hardly mentioned Ukraine, instead railed against the West.Putin appeared confident and relaxed, a marked contrast from stiff, formal and uneasy public appearances early in the eight-month-old war that had drawn questions about his health.Putin said liberal Western leaders had undermined “traditional values” around the world, and forecast an unpredictable and dangerous future.”We are standing at a historical frontier: Ahead is probably the most dangerous, unpredictable and, at the same time, important decade since the end of World War Two.”He made no mention of Russia’s battlefield setbacks of recent months, or his escalation in response, such as calling up hundreds of thousands of reservists, which has led to thousands of men fleeing abroad.Leaders in Kyiv dismissed his speech, as fighting on the ground appears to have slowed in recent days, with Ukrainian officials saying tough terrain and bad weather had held up their main advance in the southern Kherson region.Russia has ordered the evacuation of civilians from the region it holds, but Kyiv says Russia is reinforcing the area with freshly called-up reservists.Putin on Thursday repeated Russia’s latest allegation – that Ukraine was planning to use a so-called “dirty bomb” to spread nuclear material, which the United States, Britain and France have called “transparently false.” Meanwhile, Kyiv said Russia was pressing ahead with a campaign to destroy critical infrastructure ahead of the winter with drone and missile strikes.A senior Russian foreign ministry official also warned this week that Western commercial satellites could become targets for Russia if they determined them to be involved in the war in Ukraine. The White House Thursday vowed any attack on U.S. infrastructure will be met with a response.

The West has warned such an attack would likely to have been launched by Russia as a pre-text to justify its own escalation.

Putin’s willingness to refer to nuclear weapons was also questioned this week by US President Joe Biden, who called the Russian president’s frequent references “very dangerous”.

In an interview with Nexstar, Biden said: “If he has no intention, why does he keep talking about it? Why does he talk about the ability to use a tactical nuclear weapon? He’s been very dangerous in how he’s approached this. He can end this all, get out of Ukraine.”

During his three-and-a-half hour appearance at the Valdai Discussion Club – reportedly one of his longest public appearances since he mobilised troops into Ukraine in February – Putin said he had no regrets about what he dubbed the “special operation”, adding: “The historical period of the West’s undivided dominance over world affairs is coming to an end”.

During his session, titled: “A Post-Hegemonic World: Justice and Security for Everyone”, he added: “We are standing at a historical frontier: Ahead is probably the most dangerous, unpredictable and, at the same time, important decade since the end of World War Two.”

He repeated the suggestion that Ukraine could detonate a “dirty bomb” laced with radioactive material to frame Moscow – an allegation that has been denied by Kyiv and dismissed as having no evidence to back it up.