Don’t Go To The Oaks – Motel 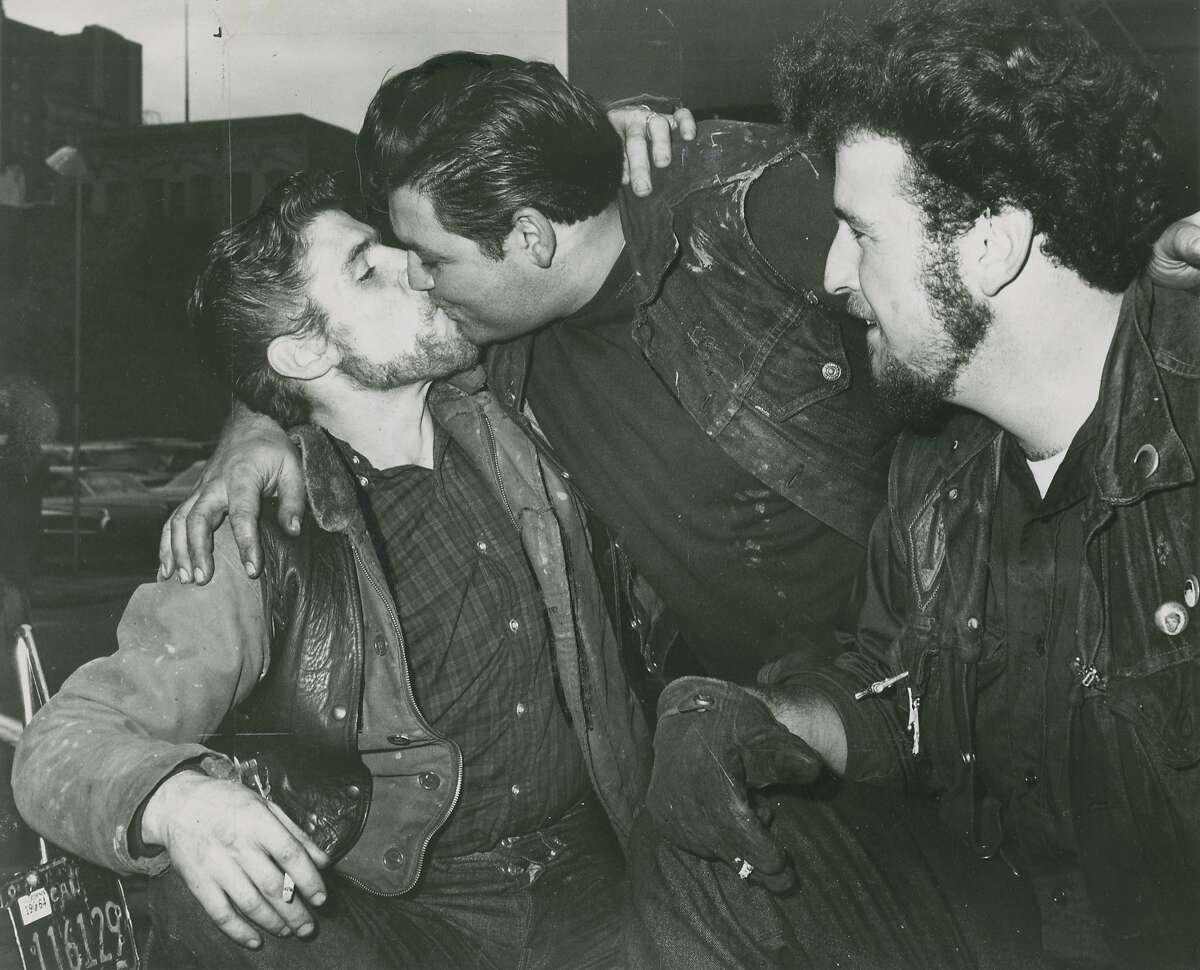 1of56November 30, 1964: Hells Angels kissing. Big man on the right is “Puff.” The caption for this photo, that appeared in the Chronicle, read as follows: “We’re ‘kiss-me, baby’ angels from hell and here’s a smack to prove it.”

The Hell’s Angels, the world’s most famous biker gang, are known for their hyper-masculine image. Famous for drug busts, biker chicks, and taking out a hit on Mick Jagger, the gang has become an icon for outlaw behavior. They also have a surprising history of fluid sexuality and homoerotic behavior. The Angels differentiated themselves from society by kissing each other on the mouth as a greeting and an opportunity to shock passers-by.

Why the Hell’s Angels Make Out with Fellow Male Bikers (vice.com)

I install Gertrude Stein, Toklas, and Sonny Barger at the Oaks Motel. Sonny was a writer. I never compared Victoria Bond and Starfish to Alice and Gertrude till I put them next to Sonny. What a perfect match! These pioneer women are buried in France, and lived in the Bay Area.

I went to Oakland in my dream last night. I ended up at a raunchy bar in the industrial part of town.

His epithet-strewn autobiography was a New York Times bestseller, and two other books, “Freedom: Credos From the Road” (2005) and “Ridin’ High, Livin’ Free” (2002), received positive reviews. Some were co-written with writers Keith and Kent Zimmerman. He co-authored a sixth book, “Let’s Ride: Sonny Barger’s Guide to Motorcycling” (2010), with writer Darwin Holmstrom.

Their relationship flourished after moving in together

After three years of Toklas’ daily visits to 27 rue de Fleurus, and another three years of shared living arrangements with Stein’s brother Leo, the two ladies finally had the place to themselves by 1913.

Theirs was a bastion of domestic tranquility and efficiency, with Toklas waking up early to supervise servants, plan meals and type manuscripts before settling in with Stein, a night owl, at around lunchtime. They left notes around the house signed DD and YD – for Darling Darling and Your Darling – and called each other nicknames like “Lovey” and “Baby.”

Additionally, while the home was already known for hosting the salons that drew artistic icons like Pablo Picasso and Henri Matisse, the get-togethers were altered to reflect Toklas’ preference for smaller, more controlled gatherings.

While the outbreak of World War I disturbed the everyday routine, it had zero effect on the time the women spent together. They launched themselves into delivering hospital supplies for the American Fund for French Wounded, zipping around France in a Ford acquired from Stein’s cousin and christened “Auntie.”

Toklas took a backseat to Stein but also ruled the roost

By the 1920s the 27 rue de Fleurus apartment was again the center of the Parisian literary art scene, this time with what was to become a famous succession of household dogs, and with American expatriates like Ernest Hemingway, F. Scott Fitzgerald and Man Ray in frequent attendance to bounce ideas off Stein and their peers.

While Toklas was tasked with entertaining the significant others during these meetings, she was, according to her New York Times obituary, more than capable of holding her own amid the fast-flowing intellectual banter, though she was mainly “content to let Miss Stein scintillate in public.”

Additionally, friends seemed to understand that Toklas was the one who kept the entire operation running smoothly. The obituary describes a time when Stein was giving an interview, which abruptly ended when Toklas instructed her to “say goodbye to your guests.” And Hemingway learned firsthand how disruptions to the domestic status quo would not be tolerated, as he was eventually excommunicated from the home over his reported attraction to Stein.

‘The Autobiography of Alice B. Toklas’ made them famous

For all her renown in Parisian artistic circles, Stein remained something of a fringe literary figure into the early 1930s, with the rest of the world entirely unaware of the existence of her assistant, collaborator and all-but-common-law wife.

That all changed with the 1933 publication of The Autobiography of Alice B. Toklas, Stein’s account of their life together from Toklas’ point of view. Unlike her difficult-to-follow “hermetic” works, the novel was written in a conventional style meant to echo Toklas’ plainspokenness, and it became the author’s first literary hit.

It also led to a highly publicized 1934 book tour of America, which brought the women back to the States for the first time in decades and allowed them to meet luminaries such as George Gershwin, Charlie Chaplin and Eleanor Roosevelt. While Stein’s lectures were largely well-received, the papers couldn’t help but report on the presence of her “constant companion,” without delving too deep into the nature of their relationship.

Their union ended with Stein’s death

The Nazi occupation of Paris in 1940 again forced the women out of their comfort zone, a more demanding task now that they were well into their 60s. They avoided detection by lying low in southern France and sold art to buy provisions on the black market, through their now-priceless collection of paintings by Picasso and Matisse.

After the war, life briefly returned to something resembling normalcy. Toklas and Stein opened their home to the intellectually curious American GI’s who were seeking encouragement or advice, and they toured Germany as part of Stein’s assignment for Life magazine.

But their four decades of partnership was nearing its end with cancer taking root in Stein’s stomach. A 1946 summer vacation in western France was cut short, and the two women found themselves waiting together at the American Hospital on the outskirts of Paris.

According to What Is Remembered, Stein’s final words to Toklas were, “What is the answer?” With no reply forthcoming, Stein followed with, “In that case, what is the question?” She was then taken away for surgery, never to be seen alive by her lover again.

Toklas sought to guard her legacy

While that autobiography ends with Stein’s death, Toklas’ life continued for another two decades. She remained a figure of minor fame for her connection to the “Lost Generation” years of post-WWI Paris and her own writing, which included The Alice B. Toklas Cook Book (and its infamous recipe for hashish brownies).

But Toklas was far more concerned with protecting Stein’s legacy than promoting her own. Indeed, Gertrude and Alice notes that as she commenced to write What Is Remembered in the late 1950s, Toklas revealed her intentions to longtime friend Carl Van Vechten: “We are agreed that the reminiscences should be centered on Baby and her work,” she wrote. “You agree – don’t you? I am nothing but the memory of her.”

By the time she passed away in March 1967, Toklas had arranged to be buried next to Baby in Paris’ Père Lachaise Cemetery. Fittingly, she chose to have her inscription discreetly placed on the back of her headstone, a final nod to her longtime desire to remain entwined to the memory of Stein while modestly ceding the spotlight to her more famous companion.

I install Gertrude Stein, Tolklas, and Sonny Barger at the Oaks Motel. Sonny was a writer. I never compared Victoria Bond and Starfish to Alice and Gertrude till I put them next to Sonny. What a perfect match!

I went to Oakland in my dream last night. I ended up at a raunchy bar in the industrial part of town.

The Oaks Motel – A Play

Did Broccoli use legal writing to transfer the Literary Legacy of Ian Fleming – to anyone? Did the Broccoli family ever claimed they owned this Legacy – that I claim – and move to the Oaks Motel, where I install Fleming, London, and Serling. If Clint Eastwood had starred in a Bond movie, then, all that mystique and movie prattle would move to the area where Clint grew up. In my sister’s biography, she and my niece encounter Mayor Eastwood in a restaurant. Then there is the Liz Taylor connection. But the most literary connection is to Thomas Pynchon, who my ex-wife lived with in Mexico.

Never before in the history of literature has a nation lost the franchise of a popular series of novels. With the killing-off of James Bond, and the subsequent attempts to – bring him back to life – one has to consider the posthumous wishes of Ian Fleming. What would he do? Ian Fleming would enjoy being put in the same literary circle and Thomas Pynchon, and vise versa.

How about a series where diseased Cold War Authors and Warriors gather at the Oak Motel, and are consulted by John John and his wife via a Ouija Board? I install Norbert’ Davis and Ludwig Wittgenstein, to make the greatest Cold War Think Tank – ever!

With this international literary move, I am more inspired with my Black Pynchon. I see a Black Columbo. Was Pynchon addicted to this T.V. series?

SYNOPSIS: Tom Witherspoon opens a Private Detective office in the Dimond District of Oakland that soon becomes a hangout for all his friends. He is – The King Fish! His wife and daughter think he is having a mental breakdown. But, when he starts solving cases, and acquires a reputation, they give up their judgmental ways. Tom – is extremely happy! He gets a barber chair an starts cutting his friends hair. Oakland is a Hard-boiled Detective City, home of the Black Panthers, Hell’s Angels, The Raiders, and Bohemian-leftists.

I was born to be a Pulp Fiction Writer – amongst other things! Is there a Philosopher in me? I think I will be writing – for Ludwig Wittgenstein – from now on. It is said writers pick someone to write for. All the folks I picked, are dead, or – want me dead! Christine has someone living in her house named Steven King. He is the latest MAN she has taken hostage. She’s trying to take me hostage again with this contrived story about Ruben Blades being the father of her daughter, Julie. I want Blades to be in my movie that takes up where MISERY left off.

As promised, I am adding Harry, Liz, and Richard – to the Oaks Motel Crowd. I am also including Montgomery Cliff – and Wittgenstein – because I just discovered he inspired several movies.

I want to do a painting of the…