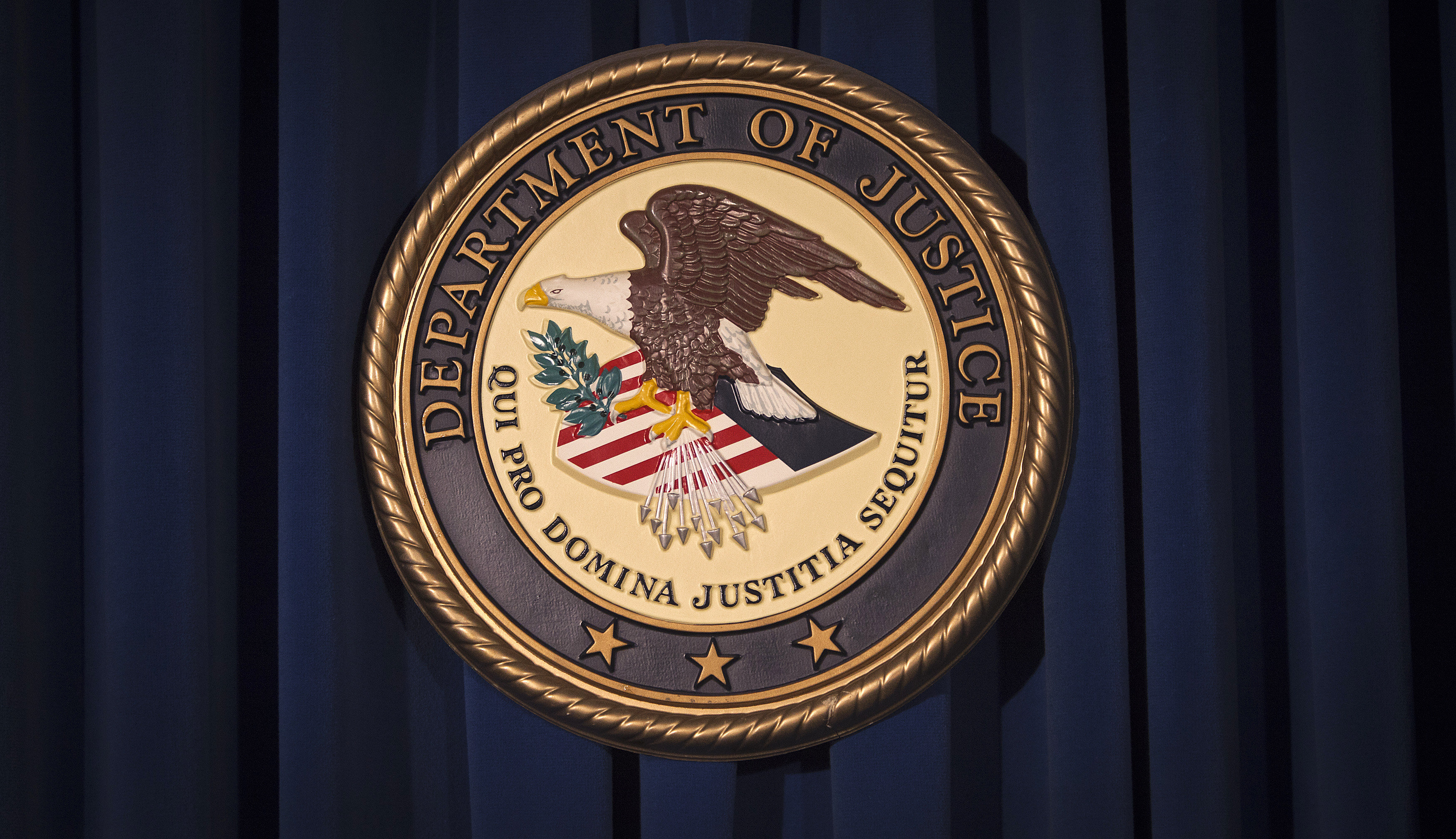 The Department of Justice (DoJ) logo

“President Donald Trump sent out a crude tweet attacking the hosts of “Morning Joe” on Thursday, claiming co-host Mika Brzezinski was “bleeding from a face-lift” during a recent New Year’s visit to Mar-a-Lago.”

The President of the United States tried to CORRUPT-TOPPLE-OVERCOME-DESTROY-WEAPONIZE…. the Justice Department in what can be called – A COUP!

Richard Donaghue said he was summoned to the Oval Office in what amounted to a SHOWDOWN between Men Who Took an Oath and Wear Badges, and, a creature that can only be described in Biblical terms. Donald Trump ACTED LIKE SATAN – who after being thrown out of the Oval Office BY THE WILL OF THE AMERICAN PEOPLE – proves to men and women who run the Department of Justice, that he (Satan) will do anything to destroy the Will of the People, because, THIS DEMOCRATIC WILL is the only thing that can DESTROY SATAN! Satan knew this – before he was elected. Its the only reason why IT wanted to be President. Satan had CORRUPTED many leaders of many nations. Satan TEMPTED Jesus! He tempted Men Who Wear a Star, and they were ready….

“GET BEHIND ME SATAN!”

Richard Donaghue said he walked into the Oval Office wearing muddy boot and blue-jeans. This is High Noon – and the battle at the O.K Corral – THAT THE LAWMEN WON! Satan and his minion knew they had lost, after their boss – SATAN – stirred up an angry mob who tried A VIOLENT COUP! Donaghue came to OUR CAPITOL……with armed men…..with badges. How long has it taken for THE TRUTH TO ESCAPE – and get to The People? Satan Trump and his treacherous helpers took THE TRUTH and JUSTICE – hostage! Satan Trump – dwarfs the Mafia, even Hitler. Hitler did not have such a SHINY THING – to corrupt! Hitler…..actually had a Civil Plan. Now WE know what Satan’s plan was – and still is!

Is Trump Satan – And Devil?

Some religious groups teach that he originated as an angel, or something of the like, who used to possess great piety and beauty, but fell because of hubris, seducing humanity into the ways of falsehood and sin, and has power in the fallen world

Why did millions of Christians vote for this vile maniac who is destroying the Office of the President of the United States of America? You can’t find one Christian who will admit they made a huge mistake. They became Haters of Obama and purveyors of Adversity! Many HATE all non-Christians!

I awoke feeling I was being too hard on Christians, and Sarah Huckabee, and almost deleted the post on her, then I read this! Is Trump reading my blog?

“Sarah’s face appeared more gnarly than usual. Her mouth was twisted and swollen in disgust that mere men wanted THE TRUTH. There were bumps all over her face that looked like painful hemorrhoids.’

President Donald Trump sent out a crude tweet attacking the hosts of “Morning Joe” on Thursday, claiming co-host Mika Brzezinski was “bleeding from a face-lift” during a recent New Year’s visit to Mar-a-Lago.

In a two-part tweet, the president said he “heard poorly rated @Morning_Joe speaks badly of me (don’t watch anymore).” Then went on to hit Brzezinski: “how come low I.Q. Crazy Mika, along with Psycho Joe, came … to Mar-a-Lago 3 nights in a row around New Year’s Eve, and insisted on joining me. She was bleeding badly from a face-lift. I said no!”

Obviously, I don’t see that as an appropriate comment,” House Speaker Paul Ryan (R-Wis.) said Thursday during his weekly press conference, adding, “Look, what we’re trying to do around here is improve the tone, the civility of the debate, and this obviously doesn’t help do that.”
Sen. Lindsey Graham (R-S.C.) went further, tweeting, “Mr. President, your tweet was beneath the office and represents what is wrong with American politics, not the greatness of America.”
Graham later told POLITICO that Trump’s insult was “highly inappropriate” regardless of any impact it might have on distracting from the GOP agenda. Asked if the president should apologize, Graham said, “I would, if I were” Trump.

Hubris (/ˈhjuːbrɪs/, also hybris, from ancient Greek ὕβρις) describes a personality quality of extreme or foolish pride or dangerous overconfidence.[1] In its ancient Greek context, it typically describes behavior that defies the norms of behavior or challenges the gods, and which in turn brings about the downfall, or nemesis, of the perpetrator of hubris.

The adjectival form of the noun hubris is “hubristic”. Hubris is usually perceived as a characteristic of an individual rather than a group, although the group the offender belongs to may unintentionally suffer consequences from the wrongful act. Hubris often indicates a loss of contact with reality and an overestimation of one’s own competence, accomplishments or capabilities. Contrary to common expectations, hubris is not necessarily associated with high self-esteem but with highly fluctuating or variable self-esteem, and a gap between inflated self perception and a more modest reality.

C. S. Lewis wrote in Mere Christianity that pride is the “anti-God” state, the position in which the ego and the self are directly opposed to God: “Unchastity, anger, greed, drunkenness, and all that, are mere fleabites in comparison: it was through Pride that the devil became the devil: Pride leads to every other vice: it is the complete anti-God state of mind.”[2]

Satan (Hebrew: שָּׂטָן‎‎ satan, meaning “enemy” or “adversary”;[1] Arabic: شيطان‎‎ shaitan, meaning; “astray”, “distant”, or sometimes “devil”) is a figure appearing in the texts of the Abrahamic religions[2][3] who brings evil and temptation, and is known as the deceiver who leads humanity astray. Some religious groups teach that he originated as an angel, or something of the like, who used to possess great piety and beauty, but fell because of hubris, seducing humanity into the ways of falsehood and sin, and has power in the fallen world. In the Hebrew Bible Satan is primarily an (or “the”) accuser or adversary. In some later Jewish writings and in the New Testament, Satan is described as a more malevolent entity opposed to God, also called the devil, who possesses abhorrent qualities.

Although Satan is generally viewed as having negative characteristics, some groups have very different beliefs. In Theistic Satanism, Satan is considered a deity who is either worshipped or revered. In LaVeyan Satanism, “Satan” is a symbol of virtuous characteristics and liberty.[4][5]