My kindred, Anthony Hodges, fought the takeover of the Sons of Confederate Veterans by Sweeney who Rick Perry blessed. My great grandmother was kidnapped by Cherokee chief and born him a son. Some of my genetic material is kin to the first landowners.  I got a whole bunch of cousins who might be on the Rolls, and due Southern Land.

Here is a Neo-Confederate Man of God judging people who disagree with him and his ilk.

“These protesters are against our Christian faith. They are anti-Christ,” SCV member Kenneth Buggay said in a fiery closing prayer shouted over a chorus of boos from the counter protesters about 50 yards away. “We have been fighting this war since 1861. We will be victorious.”

It appears Good Friday has been chosen to lament the loss of the Civil War by the treacherous Confederate Army that my kin, John Fremont, opposed. I am also kin to Robert E. Lee. You can say my DNA has a front row seat – to the New Civil War – that may start at Sone Mountain that was designed by the favorite artist of the Fremonts, Gutzon Borglum.

Members of the Sons of Confederate Veterans were met by counterprotesters – the two sides separated by a fence – during a rally to mark Confederate Memorial Day at Stone Mountain Park on Saturday, April 30, 2022. (Photo: Steve Schaefer / steve.schaefer@ajc.com)

About 200 members of the Sons of Confederate Veterans gathered at Stone Mountain on Saturday for an observation of Confederate Memorial Day, despite calls for the state-owned park to shut them down.

Instead, a little more than 100 counterprotesters descended down the wide lawn in front of the mountain’s gigantic bas relief carving of Confederate leaders, shouting and jeering, forcing the SCV speakers to struggle to be heard over the din.

“These protesters are against our Christian faith. They are anti-Christ,” SCV member Kenneth Buggay said in a fiery closing prayer shouted over a chorus of boos from the counterprotesters about 50 yards away. “We have been fighting this war since 1861. We will be victorious.”

The Confederate rally has been the target of controversy since the Stone Mountain Memorial Association approved the SCV’s permit application in March. The mountain and surrounding park are enshrined in state law as a memorial to the failed Confederacy despite having no direct connection to the Civil War.

“Nothing historic with regard to the Civil War happened at this park,” Gerald Griggs, Atlanta attorney and president of Georgia branch of the NAACP, said Saturday. “So there’s no need to memorialize traitors to the American democracy. “

The Sons of Confederate Veterans group was denied a permit to hold an observation last year on COVID grounds. 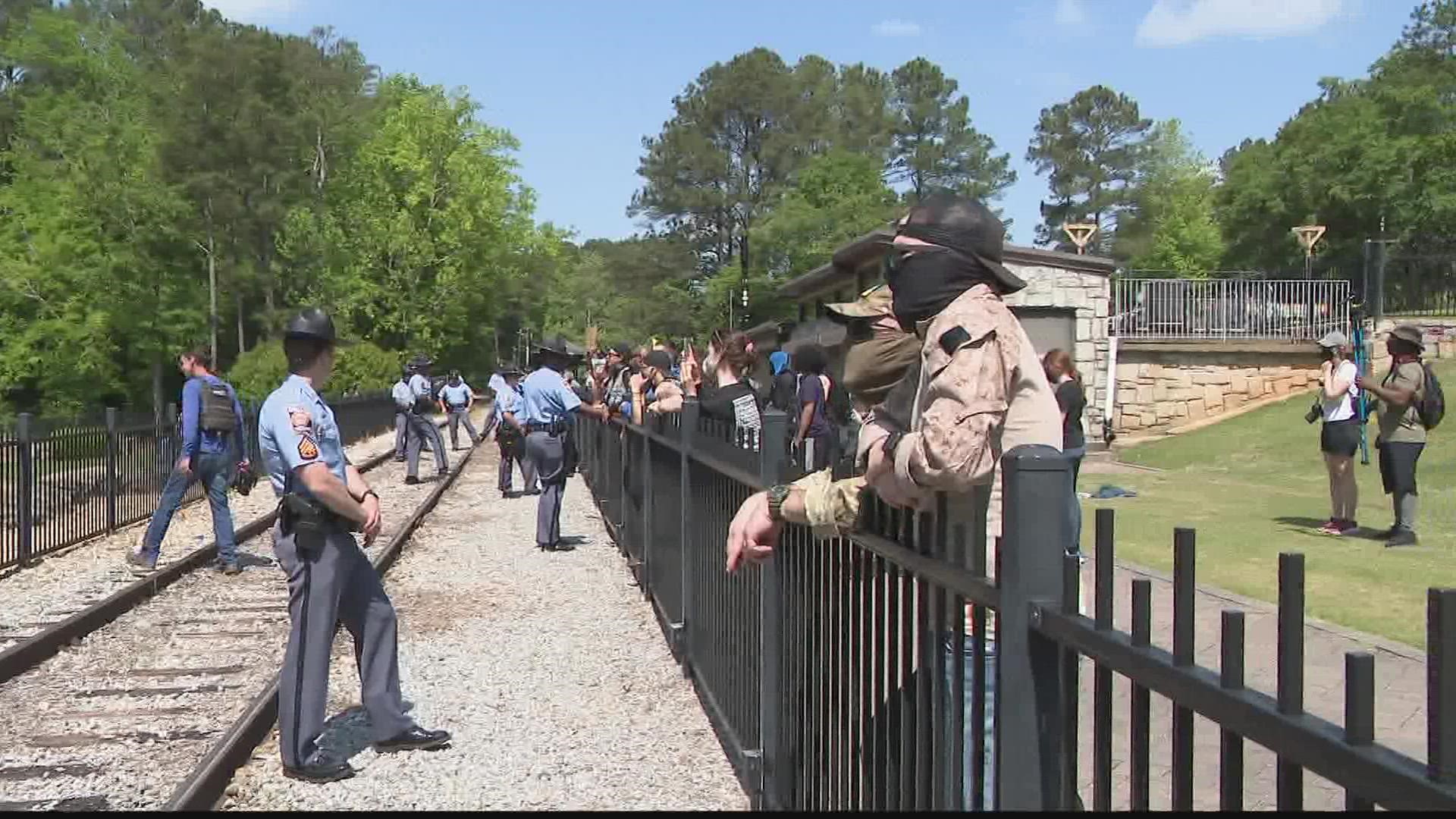 STONE MOUNTAIN, Ga. — UPDATE (1:00 p.m.): The event appears to have largely concluded without any significant clash of any kind between the Sons of Confederate Veterans and counterprotester groups.

THE LATEST (11:45 a.m.): Martin O’Toole, a spokesman for the Sons of Confederate Veterans and also the leader the openly white nationalist Charles Martel Society, is giving the keynote address at the event.

Counterprotesters are present from a constellation of groups including the Georgia NAACP, Democratic Socialists of America and The People’s Uprising. Counterdemonstrators associated with the antifascist movement are on hand as well.

Authorities have the two groups separated in different sections of the park, with state troopers manned along the middle:

11Alive’s Karys Belger spoke to one counterprotester, Pastor Bryan Pittman, who said, “As you can see, people are really tired of dealing with things that should be naturally intolerable.”

“These are people who owned slaves, who stood for things that we realize should have been intolerable and never stood for,” he said of his objections to memorializing Confederate soldiers. “We do not memorialize people who damaged people, who erased cultures, who erased families.”

The group was denied a permit last year on COVID grounds, but were granted one last month for this year by the state authority that runs Stone Mountain Park.

It is expected that the observation will be met with counterprotests. Groups including the Southern Poverty Law Center have criticized the approval of the permit for the Sons of Confederate Veterans.

SPLC Chief of Staff and Culture Lecia Brooks said in a statement this week that the Stone Mountain Memorial Association’s decision on approving the permit was a “disgraceful reversal for the SMMA, which promised ‘truth-telling’ about the park’s ugly history going forward.”

“Unfortunately, they also continue to accommodate the Sons of Confederate Veterans, a heritage group that exists to keep the Confederacy’s lies and propaganda alive,” Brooks said. “Stone Mountain Park will once again provide a platform to white nationalists, as it did in 1915 when the Ku Klux Klan was reborn atop the mountain.”

This Day in History

Recap of important historical events that took place on that day.

Martin O’Toole, a spokesman for the Sons of Confederate Veterans and also the leader the openly white nationalist Charles Martel Society, is giving the keynote address at the event.

Authorities have the two groups separated in different sections of the park, with state troopers manned along the middle:

At least one organized counter-demonstration, a “March for Unity in America” was planned by the Georgia NAACP with groups including The People’s Uprising and Democratic Socialists of America.

One group, the Stone Mountain Action Coalition, posted photos of the march:

The Sons of Confederate Veterans group has argued its activities are protected by the First Amendment and that its observation of Confederate Memorial Day is not to commemorate slavery, but “remember those who died or served in the defense of an independent Southland.”

Such defenses invoking “Lost Cause” mythology have been frequently offered for neo-Confederate and white nationalist demonstrations at Stone Mountain, which the Atlanta History Center notes has often been the site of such demonstrations for its “strong connections to white supremacy.”

In August 2020, several loosely organized white nationalist and neo-Confederate groups gathered in the city of Stone Mountain for a “Defend Stone Mountain” rally that drew hundreds of counterprotesters.

The two sides engaged in a tense standoff for hours but ultimately avoided a significant outbreak of violence.

Confederate Memorial Day was an explicit state holiday in Georgia until 2015 – when it was changed on the state calendar to a generic “State Holiday” to be observed on Good Friday. However the day itself, April 25, remains the official day of “State Holiday,” on Georgia’s state holiday calendar.

Similarly, Robert E. Lee’s birthday of January 19 remains on the calendar as “State Holiday,” and is now observed the day after Thanksgiving.