My Rose Line goes back to Ancient Rome. We did not die out We came to America!

“One of the most ancient and distinguished families of the Roman nobility, whose members often played an important rôle in the history of Italy, particularly in that of Rome and of the Papal States.

The Roman or principal line of the family, from which branched off a series of collateral lines as time went on, may be traced back into the early middle Ages, and a legendary ancestry goes back even as far as early Roman times. The Roman line, as well as its branches, had large possessions in Italy and were the rulers of numerous and important dominions, fortified towns, and strongholds. In Rome, the Orsini were the hereditary enemies of the equally distinguished Colonna: in the great medieval conflict between papacy and empire, the latter were for the most part on the side of the emperor and the leaders of the Ghibelline party, while the Orsini were ordinarily champions of the papacy and leaders of the Guelph party. The Orsini gave three popes to the Church — Celestine III, Nicholas III, and Benedict XIII — as well as many cardinals and numerous bishops and prelates. Other members of the family.

The founder of the family was Vítek III, the son of Vítek z Prčice. The Rosenberg thus originated as one of family branches of the Vítkovci. The family residence, the Rosenberg castle, was founded around the year 1250 by Wok (1262) who was also at the establishment of the monastery in Vyšší Brod in 1259. After the Lords of Krumlovdied out in 1302, Jindřich I took over the Krumlov castle as well as the whole property of the allied family branch and he transferred the family residence to Krumlov.
The Krumlov castle thus became the residence of the Lords of Rosenberg for the next three hundred years. Peter I. von Rosenbergheld the post of the superior chamberlain at the court of John of Luxembourg. His wife was a widow of the Czech King Václav III. – Viola Těšínská. His oldest son Jindřich perished together with John of Luxembourg in the battle of Crecy in August of 1346. Another significant personage of the family was a son of Oldřich II. – Heinrich III.von Rosenbergwho lead the Union of Nobility, which was displeased by the reign of King Václav IV. The Union of Nobility therefore imprisoned the king in 1396 at the castle in Český Krumlov. Heinrich’s son Ulrich II von Rosenbergbelonged to the Czech members of the nobility who defended the interests of Czech Catholic nobility and of Sigismund of Luxembourg during the stirring times of the Hussite wars. A daughter of Ulrich II was Perchta von Rosenberg who is identified with the Rosenberg “White Lady” (see Tales of the White Lady). The renowned personage Peter IV. von Rosenbergmeant, for the Rosenberg dynasty, the development of economic activities (namely fishing and the mining of heavy metals), the beginnings of humanism and the Renaissance, and especially the affirmation of a significant position of the Rosenbergs among leading Bohemian families.

The decline of the family of Rosenberg is linked with Wilhelm and Peter Wok, the sons of Jošt III, who were brought up in the guardianship of their uncle Peter V. Wilhelm von Rosenbergwas indisputably the most significant representative of the family as he made Český Krumlov the centre of cultural and political life. After his death in 1592, his younger brother Peter Wok von Rosenbergassumed the reign. In 1601, he was forced to sell the Krumlov castle to the Emperor Rudolf II of Habsburg. Peter Wok transferred his residence after the sale to Třeboň where he died in 1611. Peter Wok brought to a close the three-hundred-year-long history of one of the most influential Czech noble families – the Rosenbergs.

Vítek III. jr. had an unknown daughter and sons Zachar (“Zachariáš”) of Prčice and Plankenberk, Vítek V. of Příběnice (died before 1259) and Vok I. of Rožmberk, later Czech Supreme Marshal, administrator of Upper Austria and provincial governor in Styria.

In this part, Březan made one more mistake. He attributed two other sons to Vítek: Nicholas (he is a Prague bishop; he mistakenly took this assumption from Hájek’s chronicle) and Burian (this person only figures in the documents of Wenceslas I from 1250 as a witness of Borso de Rysenburch). 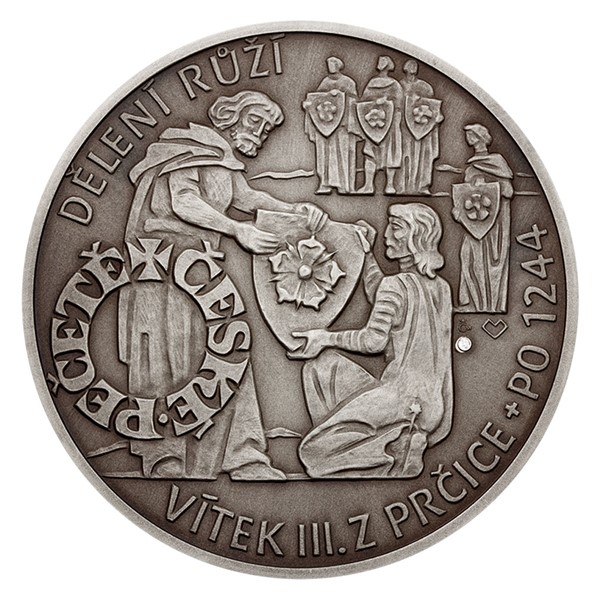 Silver medal Czech Seals – Vítek III form Prčice and Plankenberk standThe Czech Seal cycle of the Czech Mint which perceives our history with the unique optics of the world of sigillography, is made of silver medals beautified with patina. After a pair of mintages dedicated to our rulers the third issue opens a chapter reminiscent of the distinct social class of the medieval world – the nobility – represented by Witco III. of Prčice and Plankenberk.

The origins of the powerful Vítkovci clan date back to the second half of the 12th century and associate with the heraldic story of the division of roses, according to which Witco I of Prčice divided roses of different colors between his five sons. One of the sons – Witco III. of Prčice and Plankenberk, who received a silver shield with a red rose from his father, is considered to be the founder of the Lords of Rosenberg. Only one specimen of his seal, which belongs to the so-called pedestrian shield-shaped seals, remained well preserved. “From the viewpoint of iconography, there is an interesting Norman type shield that shapes the seal. The armament of standing noble medieval warrior consists of another shield, spear with a battalion and pot-shaped helmet corresponding with the 13th century. The knight’s armor is covered by the upper skirt called the surcot. The german predicate DE PLANKHINBERC is also mentioned in the inscription besides the name WITKO,” explains the author of the medal, czech expert historian and academic sculpor Michal Vitanovský.

Here is what they are hiding! I informed Jimmy Rosamond of my…