At 12:42 P.M. James Bond was out by the pool throwing tomahawks at a log, when Arthur Lee stuck his head out the window, and shouted;

“Knock it off! Some people are trying to sleep!”

,Bond looked up and saw a angry, disheveled black man.

“Look chap! I’m a firm believer in ‘live and let live’, but it’s past noon. Normal people have long been up and about.”

“Well, I’m not normal people. I’m a rock musician. and I work till 2:00 A.M. and then party and jam with my my – mates – afterwards. You’re from England. Do me a favor. Can you throw your tomohawk in the evening. I don’t get out of bed till around four!”

James went over and pulled his weapons out of the block.

“You got it. Now, go catch some more shut-eye!”

By the way….what’s your name?”

Arthur Lee, a founder of the group Love, lay in bed trying to fall back asleep. He assessed if he was justified in yelling at the new neighbor. Would he cause trouble. He ended up composing a song that he wanted on the new album. ‘Live and Let Live’ was about the British Invasion, and, the people who were already here. The base in this song is played by Carol Kaye who would go on a date with James, who ended up on the wrong side of the Hell’s Angels who befriended Michael MacLure, whose nose he bloodied at the Whisky A Go Go.

At the party, Lee worked on another song about Bond, he recognizing him as another Alpha Male who moved in on Carol like a big dog. This member of Spector’s ‘Wrecking Crew’ had deflected many smooth moves from the smoothest men in the business were she was known as the best bass player – ever!

“I see that we are the adults in the room. You appear to be alert and into getting to the point. Let’s spend the night together.”

When I discovered Carol played the base in The Daily Planet I knew I had found the genius behind the Forever Changes album, that I want in LA Bond – if it becomes a movie.

On this day George Harrison circulated a memo at Apple to tell staff that he had invited a group of Hells Angels from California to stay at 3 Savile Row.

Hells Angels will be in London within the next week, on the way to straighten out Czechoslovakia. There will be twelve in number complete with black leather jackets and motor cycles. They will undoubtedly arrive at Apple and I have heard they may try to make full use of Apple’s facilities. They may look as though they are going to do you in but are very straight and do good things, so don’t fear them or up-tight them. Try to assist them without neglecting your Apple business and without letting them take control of Savile Row.

Harrison had met the Hells Angels while in California in October and November. He had been staying in Los Angeles while producing tracks for Jackie Lomax’s debut LP, Is This What You Want?. The Hells Angels did indeed stay, arriving later in December 1968. 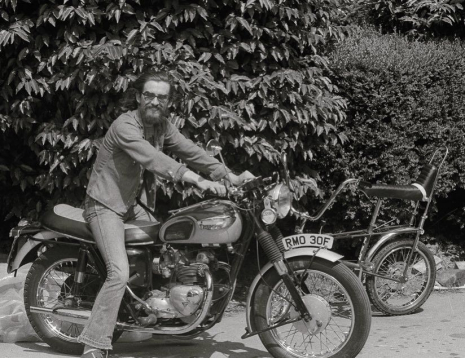 George Harrison posing on a Triumph motorcycle in 1972.

Beatle George Harrison was a profoundly fascinating cat and a mass of contradictions. Despite being known as the “quiet Beatle,” Harrison could prove to be anything but. A deeply spiritual man, Harrison believed he had led a previous life. He brought his Beatle bandmates to Northern India to become better acquainted with transcendental meditation in 1968. Later that same year, gentle George invited members of the Hells Angels to the offices of Apple after meeting a few of them getting high on Haight Street in San Francisco.

Rolling Stone founding editor David Dalton wrote about the entire affair. When Harrison met two Angels, Bill “Sweet Willie Tumbleweed” Fritch, the leader of the SF Hells Angels in the mid-60s, and Frisco Pete (Pete Knell), he extended an invitation for them to visit him in London, and attend a Christmas party at Apple Corps headquarters. Since you can’t ride a chopper all the way to London from San Francisco, the Angels’ spiritual advisor (yep), Peter “Monk” Zimmels (formerly a Buddhist monk on the run after deserting his gig with the U.S. Navy), went to concert promoter Bill Graham for travel cash.

Graham was already in deep with the Hells Angels and had received four death threats (noted in the book The Zapple Diaries: The Rise and Fall of the Last Beatles Label) including bullets fired into his office at the SF Fillmore by the infamous motorcycle gang. So when Peter the Monk arrived at the Fillmore to talk to Graham, his negotiation tactics revolved around the promise to “remove” the bullets in exchange for a $1,000 bucks so the Angels could go party with the Beatles in London. Graham coughed up the cash quickly, and a bunch of Hells Angels and two of their motorcycles would soon be on their way to see their pal, George. In anticipation of their visit, Harrison sent out a memo on December 4th to Apple Corps, letting them know a dozen members of the Hells Angels would be guests at Apple Corps’ Savile Row offices: 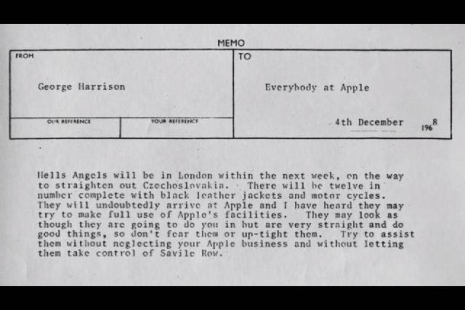 Now the notion Harrison was concerned about the Hells Angels visit is pretty apparent, as he ominously reminds Apple staff to not allow the bikers to “take control” of Savile Row—to say nothing of their plans for Czechoslovakia, which is over 800 miles away from London. Once they arrived, only two of the Angels actually made it through customs, Frisco Pete and Tumbleweed, along with an assorted group of hangers-on. When they arrived at the party, they were expecting to hook up with George, who would later whisk them away to his massive mansion. Once Harrison showed up, he gave the motley group a tour of Apple and then vanished, leaving the staff at Apple to deal with his guests. At the party, John and Yoko were dressed as Ma and Pa Christmas while a giant 43-pound turkey took its time cooking. All the while, Hells Angels, being Hells Angels, along with their jet-lagged entourage, consumed tons of booze and smoked hash. A completely blotto Frisco Pete, blind from drink and suddenly hungry, lurched into the main party room and screamed at John Lennon, “What the FUCK is going on in this place? We wanna eat!”

Strange Forbidden PlacesStrange Forbidden PlacesPauseNext video0:13 / 3:02SettingsFull-screenPete’s announcement sucked all the air out of the room as everyone waited to see what was going to happen next. This is the part of the story when fists start flying. Because it ain’t the holidays until someone gets punched.

According to The Zapple Diaries, journalist Alan Smith responded to Pete’s demand for grub, politely asking the biker to “have a little consideration.” This got Smith punched in the face by the angry, drunk, high and hungry biker, sending him across the room where he crumbled into a pile on the floor. Now Pete turned to Santa Lennon and screamed the following:

“You got more fucking food in that kitchen than there are people, and it’s all locked up, and those two fucking broads upstairs tell me I’ve gotta wait until 7:00 just like everybody else! There’s a forty-three-pound turkey in that kitchen, and I want some of it now!!!” 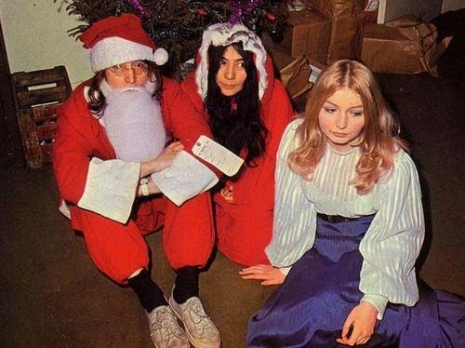 A photo of John Lennon, Yoko Ono, and Apple artist Mary Hopkin at the Apple Corps Christmas Party in 1968.

After Lennon told Pete it wasn’t “cool” to be hungry, Peter Coyote (Frisco Pete’s multi-talented actor/director/friend, who had spent the flight from California to London injecting himself with methamphetamine and B12 to help “cure” his hepatitis), intervened telling Lennon to take a seat. It was now time for Apple’s administrative director Peter Brown to materialize and deliver this soliloquy (via The Zapple Diaries) to Frisco Pete in an effort to chill out the volatile situation:

“Now listen, Pete, we have every intention of feeding you, and I apologize for the delay, but I was hoping you could appreciate the kitchen staff have been working since 9:00 am, and they’ve been under considerable pressure. We’re waiting for the caterers to finish laying the tables, and it shouldn’t take more than another ten minutes, and then we can all go downstairs and gorge ourselves to death, but please, I beg you, be patient.”

Amazingly, Brown’s very English entreaty didn’t get him whomped in the face; it instead, quite surprisingly, sent Frisco Pete back to his clan, who were still imbibing and salivating in the other room. As promised, ten minutes later, the downstairs boardroom opened, and because he was hungry and presumably all out of fucks to give, Frisco Pete grabbed a turkey leg and started eating it caveman-style. The rest of his entourage invaded the room and devoured the entire dinner, including the fancy wine it was served with. Then, since it ain’t really a party until somebody pukes, several of Harrison’s not-so-angelic guests barfed on the carpets due to overindulgence. The bikers would stick around Apple, sleeping wherever they wanted, including George’s office, until, a few days into their invasion, Harrison finally asked if they would be “moving all of their stuff” out tonight. The biker contingency was caught off guard, still thinking Harrison was their buddy, causing someone in the group to ask George if he “dug them or not.” Harrison’s very “Ob-La-Di, Ob-La-Da” response was allegedly as follows:

“Yin and yang, heads and tails, yes and no.”

Apple Corps president Neil Aspinall witnessed the showdown, recalling that Harrison’s quizzical comment left the bikers speechless. To illuminate what George was trying to say, he chimed in with, “You know, BUGGER OFF!” which wasn’t lost on Tumbleweed and Frisco Pete, and the group left without further incident.

The trailer for the 2017 documentary ‘The Beatles, Hippies and Hells Angels: Inside the Crazy World of Apple.’ Narrated by Peter Coyote.

With thanks to the wonderful Martin Schneider.