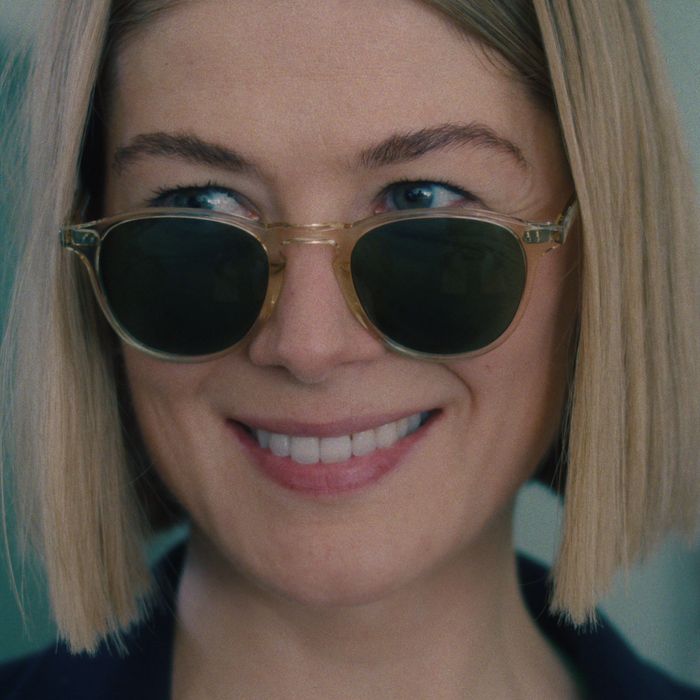 I just watched I Care A Lot, and was reminded of the sale of the dead body of a famous artist to Stacey Pierrot so she can make a killing as the new owner of the Rosamond Gallery, and, book and movie rights. I have been threatening to send this blog to Netflix. I will start my script with Staey kneeling before my mother at her daughter’s funeral, taking her hand, and saying;

The law frim of Robert Brevoort Buck handled our creative legacy. Buck set up the Buck Foundation in Marin, where I was disuaded from seeking a grant – on the phone! I just sent this message to the President and others. My contention, is, if Robert Buck sold everything to an outsider who wrote slanderous bios and movie scripts – to increase interest in Rosamond prints – then a grant to compile our famous family history, will do what Smiling Stacey – failed to do!

I would like to send in a grant proposal to see if it will be of benefit. I would like you to say “no” in an e-mail. I am the Buck family historian. Robert Brevoort Buck handled the estate of my late sister, the world famous artist, Christine Rosamond Benton. I am her teacher. She married Garth Benton the cousin of the famous artist, Thomas Hart Benton. Think about what Berle and Leonard Buck want.

The main reason to watch I Care a Lot, J Blakeson’s twisty thriller now on Netflix, is Rosamund Pike. The film around her character, Marla Grayson, is a bit of a monster — in the old sense of the word, in that it has the body of one beast and the tail of another. I Care a Lot wants to race along like a caper movie; it wants to sting like a satire. But it often winds up fighting itself, paralyzed by its own toxin.

Marla’s grift is (mostly) legal elder abuse. She bribes a physician to say an elderly patient is mentally unfit, then she persuades a judge to appoint her as the senior’s guardian. In one fell swoop, Marla gets the power to put her wards away in a nursing home, where she can control them totally, from limiting their visitors to liquidating their bank balances. She uses the proceeds to pay herself, and the money rolls in. You might think that Marla, who needs to pull the wool over people’s eyes, would come to court in sheep’s clothing, but no. When we see her twisting the system round her finger, Pike’s hair slices sharply enough across her cheekbones to draw blood. She looks like the dragon-lady boss in a ’90s corporate thriller, a stalking predator in a bloodred dress.

She and her lover-slash-assistant, Fran (Eiza González), are waiting for a “cherry,” an older person with a fat bank account and no nosy family, someone they can park in a home and suck dry. One day, thanks to corrupt Dr. Amos (Alicia Witt), a sweet little old lady named Jennifer (Diane Wiest) drops into their laps. In a montage, we see how the scam works, how Marla blizzards Jennifer with documentation and official language, how swiftly the older woman’s phone and autonomy are taken away. But Jennifer is less alone — and less sweet — than she seems, and the folks that come to find her include an irritated gangster, played by Peter Dinklage.A nightly newsletter for the best of New YorkSIGN UP FOR ONE GREAT STORY

This sets up a battle royal that also turns out to be, approximately, a battle of the sexes. Marla refuses to be intimidated by threats or even harm; she sneers at any man who tries it. She and Fran and Dr. Amos (and a few other obliging professional women) are competent in their monstrous efforts, while Dinklage’s gang is populated by nearly all male ding-dongs, bruisers accustomed to winning on the first swing. Unfortunately, Wiest is sidelined by the film, despite being its prize. During a lull in the action, there’s a tremendous scene in which Jennifer, dazed by overmedication, has a tense conversation with Marla, her “guardian-robber.” Jennifer’s gaze wanders, then sharpens. Deep in her eyes, a shark rises up from the dark. We wonder — could it be that it takes an old predator to bring down a young one? But the plot turns instead towards Dinklage and Pike and their increasingly Rube Goldbergian plans, and Wiest slips away again, back to the dramaturgical depths.

Blakeson, who also made The Disappearance of Alice Creed, is interested in the violent Absurd, so here he followsthe Coen brothers in their Burn After Reading mode, stylizing for all he’s worth. His heavy hand does sometimes shake. Blakeson is British, and in sending up American evils, he dresses his characters as cartoonishly as panto villains: In order that we understand him to be a baddie, Chris Messina, a mobbed-up lawyer, wears a pinkie ring and a watch chain and a three-piece-suit made from upholstery fabric. Pike’s lipstick is so intensely red, her mouth becomes the focal point of any shot she appears in — not her eyes, which are often hidden behind mirrored sunglasses. And Dinklage and his team owe some of their stylings to other Coen Brothers films and their physical-comedy influences: They bobble weapons, hurl smoothies, and wear costumes so loud I apologized to my downstairs neighbor.

Some will find this cartoon toxicity entertaining, but I couldn’t reconcile the film’s very different registers. Essentially, there are two films here fighting it out. First, there’s a horror film about the way we exploit and ignore the elderly, particularly frightening because it’s true. Blakeson’s script does a good job of demonstrating how Pike’s corporate-speak pseudo-compassion makes the court system comfortable: Her cool professionalism reassures the judge, whereas other, messier interests — like her wards’ families — unnerve him with their emotions. There’s no way to argue once Marla’s got you in her coils, because arguing only makes you seem unstable. All it takes is one overburdened judge (Isiah Whitlock, Jr.), a slimy nursing-home director (Damian Young), and Marla to twist the care industry into a Kafkaesque labyrinth. In this, the movie is grave and real and nauseating. The film has tons of guns and near escapes, but no shot is as frightening as Jennifer’s soft face, crumpling when she realizes her nurse would rather sedate her than listen.

The second film is a glossy, aerodynamic caper, full of disposable buffoons with pistols and pastries (both equally loved) and a grifter overreaching her con. Clearly, when everybody’s wicked, you can dole out the mayhem with an easy spirit! In early scenes, Blakeson asks Dinklage to play it broad, a direction Dinklage takes perhaps too well, and action scenes turn slapstick. I Care a Lot is concerned with surfaces and style, part of a long tradition of goofball gangster pictures. And Marla’s voice-over at the beginning of the film establishes that she sees herself as a scrappy, up-from-the-bottom antihero. “Playing fair is a joke invented by rich people to keep the rest of us poor,” she says, which would certainly excuse a bit of light drug dealing or an insurance swindle or three. But Marla is assaulting the elderly, isolating them, mass-neglecting them. Whoops! The first film does so well at evoking genuine horror, it fills the second film’s balloon with lead.

1 Response to I Really Do Care – Not!