I just found a facebook page that Alley Vakyrie founded to get Jon Ruiz fired. This is before Belle Burch approached me in Kesey Square. In this blog I talked about the killing of that black puppy on Beacon Hill and how it left scars – that my neighbors exploited because they came to believe I called all Christians “Nazis” This is a lie told to sitr up my neighbors against me. https://www.facebook.com/Fire-Jon-Ruiz-639805446090363/

Fire Jon Ruiz
April 6, 2014 ·
Posted by Alley Valkyrie. “Here’s some CC quotes from Feb. 18:
Jon Ruiz, City Manager, ..”our intent is not to just to go in and shut down the site, our intent is to provide time for people to transition to whatever site that Council chooses, and so that is what our intent is as we go forward and that may take whatever the reasonable time line is, an appropriate time line is and we would work toward that.”
Claire Syrett, City Councilor, “I am very glad to hear the City Manager state very clearly the intention to find a new location and to invite folks at Whoville to relocate there. I think that speaks to the intent of the motion that I proposed and that this Council passed. ”
Chris Pryor, City Councilor:, ” …three thoughts, the first one is i just want to be absolutely clear, i don’t think it is the intention of the members of the council to shut down whoville before we have a place for them to move. i just want to be clear from all the conversations we’ve had and i believe you understand that whatever we need to do have the operating until we have an alternative in place is what our intention is and i’m hearing you say you get that you understand that.
Alan Zelenka, City Councilor, “Yea, I concur that our intention was to have a place to go before Whoville shuts down…. …with regard to other sites and collaborations.” 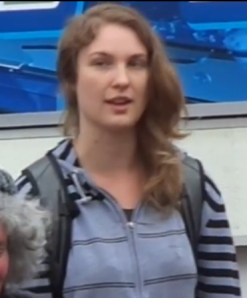 I just discovered that Alley Valkyrie was with Belle when she got arrested as was Ambrose
Holtham-Keathley. Did Ambrose know Alley was going to launch an attack against me? Did Alley suggest Belle give me a call to set up an appointment to meet?

Here is a message I got around midnight from Alley Valkerie. She sounds like a Nazi. She threatens to fill me with terror if my newspaper doesn’t stop writing about Belle Burch. Alley sounds like a Professional Victim that has made life difficult for our elected city leaders, people chosen by the people. Did Alley ever win, or lose, an election? Did her peers elect Alley as their spokesperson? Are the citizens of Eugene tired of being harassed by street punks? As a reporter for my paper, I will make sure I am at very civic meeting Alley attends to ask her real hard questions.