If you are an elderly citizen of Eugene and you wanted to go downtown to sit on a bench and feed the pigeons, let it be known, no one gives a shit about you. Now that the MERRY Pranksters are kicking the bucket, here come the Heirs of the Happy Hippie Scene we saw downtown – for fifty years! Has everyone in Eugene lost their sense of humor – and their minds? We know Springfield lost their merriness when 500 pound El Lardo began pushing around a Senior Citizen – and kicking cats! Management seems powerless to stop her. 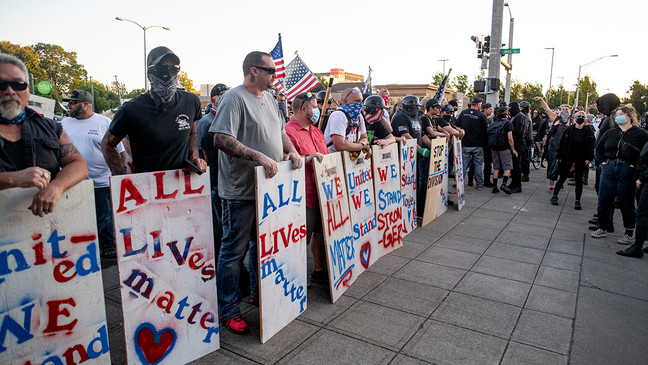 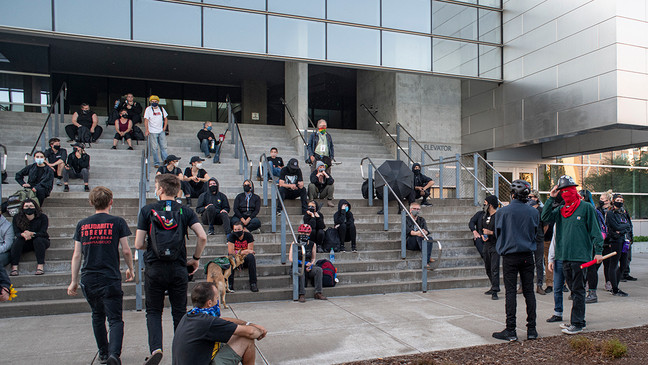 EUGENE, Ore. — A Black Lives Matter protest was met with a large counter-protest in Eugene on Saturday night, and things quickly got out of hand as the event turned into a riot, according to the Eugene Police.

In a press release, EPD laid out the following details:

EPD became aware of a planned protest at the US Federal Courthouse starting at 8 pm on Saturday night. Based on activities in Eugene and other cities, EPD staff staged to protect lives and safety, and the group engaged in free speech activity, as they blocked streets, and as a counter-protest formed with several members carrying firearms. Numbers of the groups combined to well over 300 present.

Officers in the area witnessed a man firing a handgun into the air amongst about 300 protestors. The man who fired the gun was contacted away from the protest by officers and subsequently arrested for Unlawful Use of a Weapon and Recklessly Endangering Another Person. The weapon was discarded by the suspect as he fled the scene, but recovered by officers with the help of witnesses.

Just before 10 PM, the counter-protest had dispersed and someone launched aerial fireworks toward the US Federal Courthouse as the primary group moved in a march through Eugene streets. Members supporting the protest group disrupted traffic while the protestors remain in roadways. EPD units did not interfere with the primary protest, since no property was being damaged, and since no violence was taking place.

The group size remained over 200 as they moved toward Downtown Eugene. When the group marched to the Lane County Jail, members of the group threw fireworks into the employee parking area and lit smoke bombs at the front of the facility. The group left marching through Eugene streets after about ten minutes at the jail.

At about 10:46 PM, the group formed at 8th Ave and Charnelton Street. Members of the group removed EWEB signs in the area, and about ten minutes later tagged the front of the Police Auditor’s office. At about 11:00 PM, the group passed a business near Broadway and Willamette and people tried to remove a picnic table from a local brewery.

As they moved eastbound from Willamette at about 11:12 PM, members of the group tagged the building and broke windows at the Wells Fargo Bank on the corner of Broadway and Oak Street. Although holes in Wells Fargo windows were large enough for entry, no suspects were found inside.

The now-riotous group moved eastbound on Broadway; tagging buildings and breaking a window of Whole Foods at about 11:20 PM and someone was observed ripping up a street sign as another carried a torch. The group moved quickly eastbound on Broadway to Elkhorn Brewing, where members of the group launched fireworks at the building, tagged it and broke several windows at about 11:24 PM.

Employees were inside the building at the time and managed to escape safely as police moved in to the area to prevent further damage or harm to life safety.

Officers gave admonishments to the group that the assembly was unlawful, and no arrests were made as the group moved northward on Hilyard. The crowd size was still over 200 hundred based on observations from several angles. Additional street signs were torn out. Subjects from the crowd moved past NW Community Credit Union and rolled a dumpster into the roadway, while others tried to start fires at the US Federal Courthouse around 11:32 PM.

The group moved past the US Courthouse, and made their way onto 7th Ave Westbound against traffic. A support vehicle drove behind the group as they occupied all lanes and blocked one-way traffic eastbound. The driver of that vehicle failed to yield to admonishments to leave the area or to police officers following. He was arrested by EPD at about 11:44 PM.

Additional arrests followed as subjects refused to disperse. Despite this fact, the group continued to move through city streets. A second male suspect and a female suspect (who turned out to be a juvenile) were arrested for Riot and Disorderly Conduct as they drug newspaper boxes into the roadway and were throwing rocks at the officers and vehicles. Officers were engaged by subjects throwing rocks at them near 8th Ave and Lawrence at 11:56 PM, and had to deploy Pepperball munitions to prevent the attack from continuing.

A citizen was assaulted by a member of the riotous crowd at about the same time. Officers continued to take projectiles as they followed the group into the Jefferson Westside neighborhood. At Jefferson St and West Broadway, officers attempted to defend themselves from incoming projectiles just after midnight by deploying 2 canisters of CS gas. This was effective, and several members of the crowd left the area.

Officers reported having fireworks launched at them by members of the same crowd. Despite the above, at 12:10 AM, officers were pelted by large rocks by members of the crowd. Several officers received minor injuries from that assault. The group moved back toward the US Federal Courthouse as members left in multiple directions. Additional arrests were made near 8th Ave and Mill Street.

A total of 7 adults and 1 juvenile were arrested as a result of tonight’s Riot. Names and charges will be released at a later time.