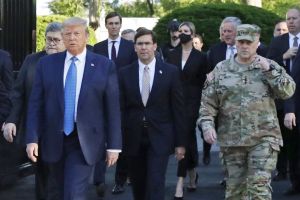 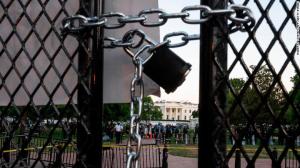 A locked padlock keeps a metal fence recently erected in front of the White House and meant to keep protestors at bay closed on June 2, 2020. – Protesters returned to the area after they were tear gassed on June 1, 2020, to open the way for US President Donald Trump to walk to the church for a photo-op. (Photo by ROBERTO SCHMIDT / AFP) (Photo by ROBERTO SCHMIDT/AFP via Getty Images) 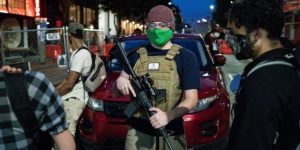 This is the crime of extortion. If anyone has been subjected to this, we need them to call 911,” Assistant Chief of Police Deanna Nollette said on Wednesday. 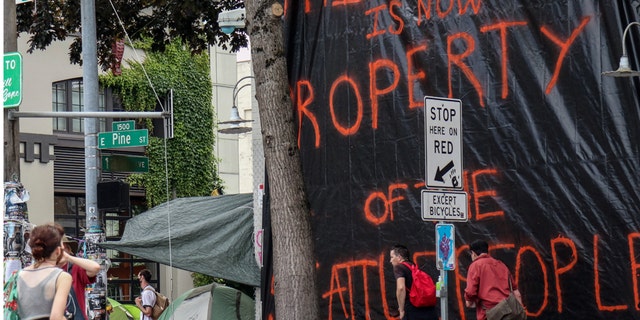 The seemingly abandoned East Precinct station of the Seattle Police Department is covered in a tarp declaring it ‘property of the Seattle people’. Protesters declared a Cop Free Zone following days of demonstrations in response to the police-involved death of George Floyd in Minneapolis. (Toby Scott/SOPA Images/LightRocket via Getty Images)

The region encompasses the SPD’s East Precinct, which was abandoned by cops on Monday following days of violent clashes between law enforcement and protesters in the wake of George Floyd’s death, as well as parts of Capitol Hill.

Officers retreated from the area in an effort to quell the violence– which included multiple shootings, one that was sparked after a man rammed his vehicle into a crowd of protesters. Police officers have deployed tear gas and pepper spray to disperse large groups of people.

“We wanted to be able to facilitate and support peaceful demonstrations,” Nollette said.

Demonstrations within the autonomous zone have been mostly peaceful, with no reports of violence, but police say armed guards have been surrounding the perimeter of the region and residents who live within the boundaries are “forced to show ID to prove you “belong” there,” a law enforcement official told Fox News.

“I have nothing but deep admiration for and total confidence in General Milley as Chairman of the Joint Chiefs of Staff,” the South Carolina Republican tweeted on Thursday. “I support his statement in both substance and spirit regarding the recent presidential visit to St. Johns.”

Graham added, “General Milley is a tremendous military leader who understands the long tradition of maintaining an apolitical, nonpartisan military.”

Milley earlier on Thursday called his appearance in a controversial White House photo-op a “mistake,” saying that his presence “created a perception of the military involved in domestic politics.”