Lost Code of Queen of Bohemia

For years I studied the book ‘Holy Blood, Holy Grail’ by Baigent and Leigh who sued Dan Brown. There is a code on a tomb that suggests a linage of the Merovingian, a royal lineage that allegedly Jesus and Mary Magdalene begat. I suspect Mary was a pagan convert, and not a Jew. I suspect she came from the King and Queens of the Boeii, the Bohemians who helped Hannibal cross the Alps. Hannibal means “Gift of Baal” whom most of the Jews worshipped.

Elijah and other prophets waged a holy war with the Prophets of Baal, some who were women. I suspect, Catherine of Bohemia descends from the Mary’s of Baal…..Mira-baal. Saint Ludmila was assassinated by her daughter-in-law, Drogomira. Ludmila and her husband were Pagan Converts, or so it is alleged.  Many Pagan Royals pretended to be converts, and held onto core beliefs. The Torah is about such people. The Habsburgs practiced pagan-like rituals, especially when it came to burying their dead. There was also a Birthing Stone that was present when this mysterious royalty bore children. George Bush and Kerry descend from Bohemian Bluebloods.

I belonged to about ten yahoogroups that discussed this Mira-Baal lineage that said Jesus and Mary established an incredible lineage. I said it must not have been that powerful, for the only evidence lies with the Sinclair family and a catherdral in Scotland.

“What about the Habsburgs? They are an alleged “Rex Deus”  that my Rosamond-Rougemont ancestors may have belonged to.”

An Electress (German: Kurfürstin, Latin: electrix) was the consort of a Prince-elector of the Holy Roman Empire, one of the Empire’s greatest princes.[1]

The Golden Bull of 1356 established by Emperor Charles IV settled the number of Electors at seven. However, three of these were Roman Catholic archbishops, and so had no consorts; while of the four secular Electors, one was King of Bohemia, and his consort was always known by the more prestigious title of “Queen of Bohemia“. The consorts usually referred to as Electresses, therefore, were:

Furthermore, Plantard was inspired by a 1960 magazine Les Cahiers de l’Histoire to center his personal genealogical claims, as found in the “Priory of Sion documents”, on the Merovingian king Dagobert II, who had been assassinated in the 7th century.[26] He also adopted “Et in Arcadia ego …”, a slightly altered version of a Latin phrase that most famously appears as the title of two paintings by Nicolas Poussin, as the motto of both his family and the Priory of Sion,[27] because the tomb which appears in these paintings resembled one in the Les Pontils area near Rennes-le-Château. This tomb would become a symbol for his dynastic claims as the last legacy of the Merovingians on the territory of Razès, left to remind the select few who have been initiated into these mysteries that the “lost king”, Dagobert II, would figuratively come back in the form of a hereditary pretender.[28][29]

In 921, after St. Ludmila moved away to the city of Techin, her daughter-in-law Dragomira sent two boyars in secret to murder her. St. Ludmila was praying at the time, and the two assassins entered the house and carried out Dragomira’s orders and strangled in her old age.

St. Wenceslaus buried his grandmother’s body in the Church of St. George in Prague. Many miracles are said to have occurred over her holy relics.

St. Ludmila is buried in St. George’s Basilica, which is the oldest surviving church building within Prague Castle. A Gothic style chapel within the basilica (which holds the tomb of the saint) is dedicated to St. Ludmila of Bohemia.

Whatever the final count, the next president of the United States will be a direct descendent of the ancient rulers of Bohemia. A well-known Czech-American scholar says that both President George W Bush and Senator John Kerry — who are very distant cousins, twice removed — can trace their roots back to Duke Borivoj I and Saint Ludmila.

Historians generally agree that the 11th century Bohemian King Vratislav II is the 28th great-grandfather of John Kerry — meaning you’d have to say the word “great” 28 times before saying “grandfather” to describe the relationship — while George W Bush is the 30th great-grandson of that same Bohemian king.

But noted scholar and genealogist Dr Miloslav Rechcigl, president of the U.S.-based Czechoslovak Society of Arts and Sciences, claims the Bohemian “blue blood” in the two politicians’ veins can be traced back even further, to Borivoj I, the earliest recorded duke of the Premyslid dynasty, who was born around the year 850.

Dr Rechcigl, aged 73, has been chronicling the history of Czech immigrants for more than 40 years.

Back in 1999, he began studying the family history of George W. Bush, who, on his father’s side, can claim kinship with Britain’s Queen Elizabeth, as well as with Kings Henry III and Charles II of England — and to the Premyslid dynasty of Bohemia.

According to Burke’s Peerage, experts on British aristocracy, every maternal bloodline of Kerry makes him more “royal” than Bush — or for that matter, any previous American president. Like Bush, Kerry is a descendent of English kings, including Henry III and, more distantly, Richard the Lionheart, who led the third crusade in 1189, as well as to Czar Ivan “The Terrible” and the royal houses of Scandinavia. The list goes on an on.

Kerry has more immediate connections than Bush to the Czech lands — it was discovered during the presidential campaign that Kerry’s grandfather emigrated from the town of Horni Benesov in today’s Czech Republic.

Bush’s bloodline, however, may actually be more “Czech” than Kerry’s, says Dr Rechcigl, as both Bush’s father and mother have some Czech heritage. 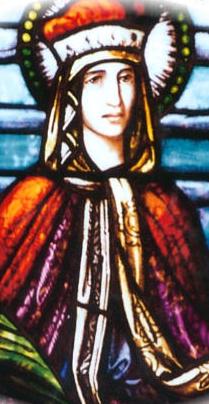 Saint Ludmila, first Duchess of Bohemia, wife of Bořivoj I, progenitress of Czech rulers and also their wives.

This is a list of the royal consorts of the rulers of Bohemia.

There was only one queen regnant in Czech history – Maria Theresa. Nevertheless, some female royal consorts were highly influential in the country’s history, having ruled as regents for their minor children and heirs, as well as having a great influence over their spouses.

The title was used until 1918, when husband of the last queen was deposed.

1 Response to Lost Code of Queen of Bohemia