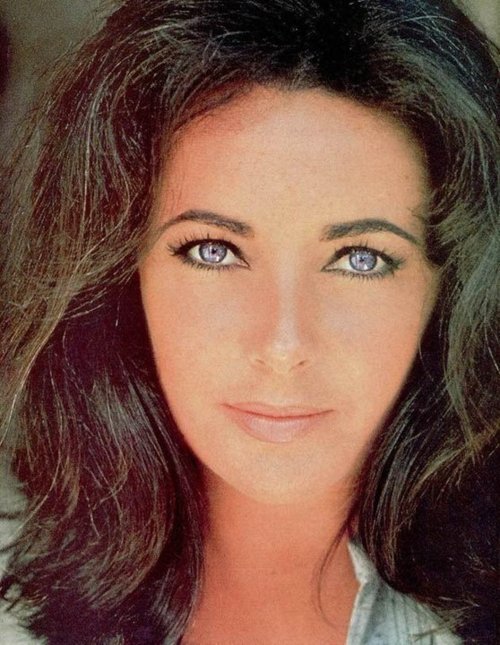 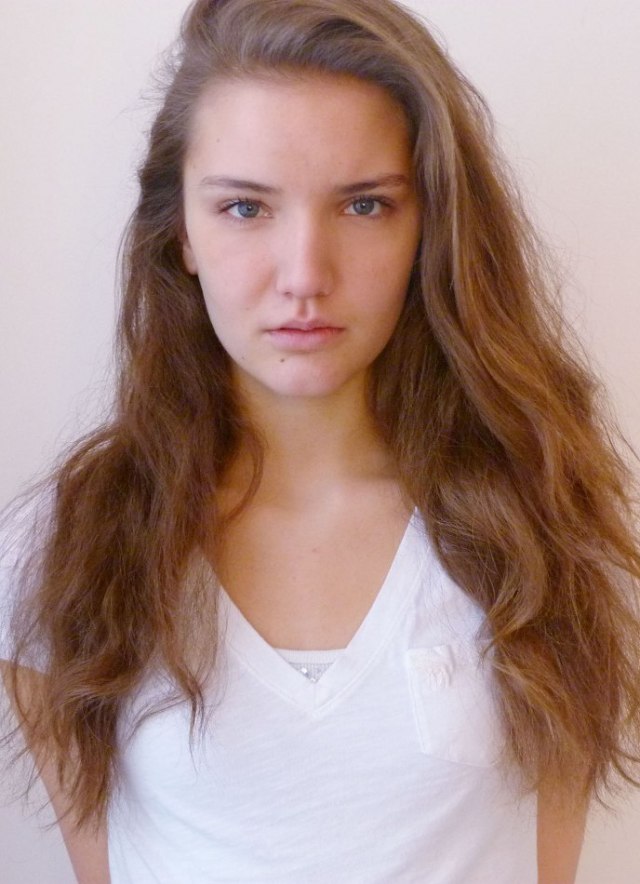 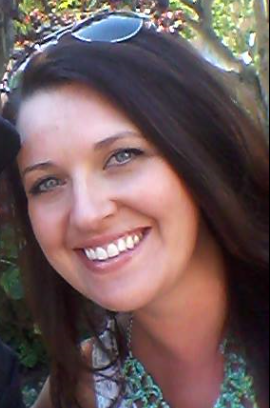 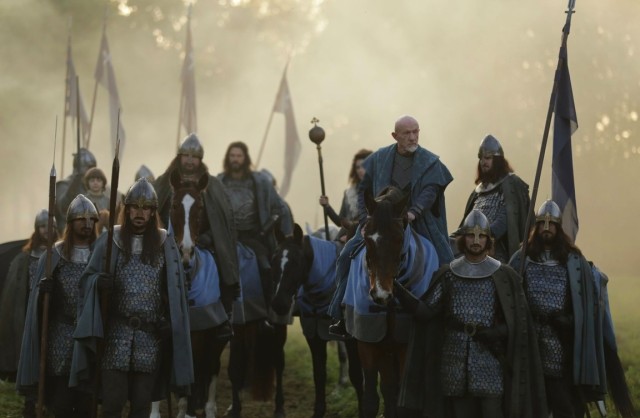 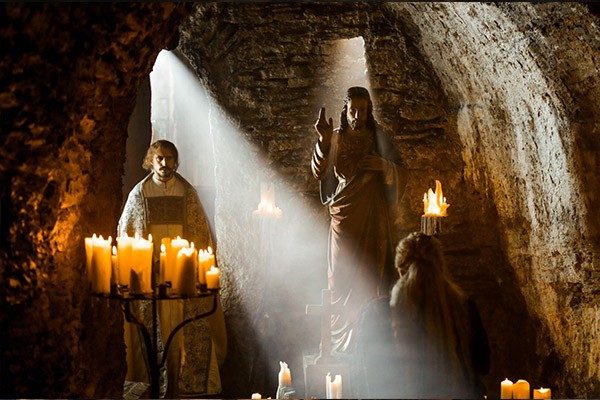 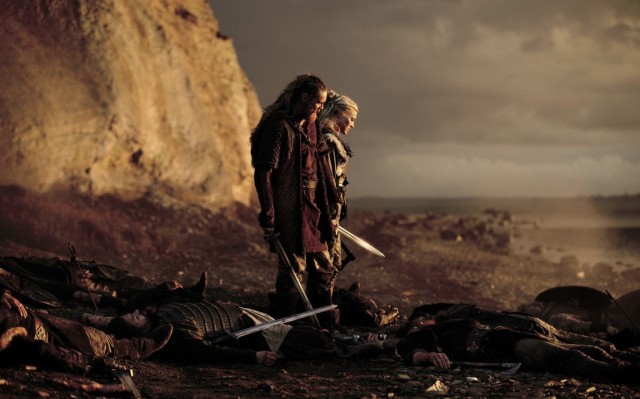 I got another Christmas Present. I found the Dutch movie ‘Redbad’ who may be my ancestor. I will keep this one a secret. Actually, I showed how to my daughter, Heather Hanson, and, the actress, Lara Roozemond. They were not paying attention. They do not read genealogies and history. I did not hear from Heather this Christmas. She is focusing on giving birth to my granddaughter. Lara has dropped out of sight, and I believe, acting school. She could have gotten a role in this movie, if she knew the right people. Young people need a pay day, not a intellectual study. Redbad is related the Merovingians.

There is talk about a third movie about William of Orange. I have Victoria Bond taking part in a Orange Parade. I doubt it will be made due to the tedious length and real history Redbad goes into. Christians found reasons to whine, a holy payday.

Having doubts about the pagan rituals of his fathers’ people, Redbad (Naber) starts to become disillusioned when the woman he loves is offered as a sacrifice. Whilst coming into conflict with his father, the Frisians are caught off guard as Frankish forces invade Dorestad. Having lost their territory and leader during the conflict, Redbad is tied to a raft and pushed to sea for going against the will of his people. Washed up on Viking land, he slowly starts to earn their trust and build a new life before finding out his sister has been married off to Charles Martel, son of the Frankish King. Vowing to get her back he begins to build an army to go up against the Franks and take back the land they stole.

Directed by Roel Reiné, Redbad is a Dutch film which holds the unfortunate honour of being the country’s biggest box office bomb. Failing to attract an audience, the producers cited a number of reasons for its miserable performance with warm weather, the World Cup and blockbuster competition all being potential factors for its downfall. Having also received negative reviews from major Dutch newspapers, things haven’t gone so well for Holland’s unsung hero.

Visually, Redbad is a very good looking movie, with Reiné’s stylish cinematography giving the whole production an aura of a big budget release. The sets look authentic and the score by Trevor Morris manages to ebb and flow throughout giving an almost majestical feel too much of the action. With some jaw-dropping shots, Reine has managed to exceed himself on such a tight budget and whilst the performances may not be the best, they’re good enough to keep one’s attention.

Sadly, the film is let down due to a weak script. Despite Alex van Galen’s screenplay attempting to ask deep questions about morality and religion much of the dialogue is laden with grandiose speeches about one’s destiny. Add to that themes of betrayal, loyalty, loss and sacrifice and you’re left with all the classic hallmarks that fans of the genre have seen before.

However, there is no hiding that the films biggest issue is its two hour and forty minute running time. With such a dense story that chronicles the many different battles within Redbad’s life, one might think that this would have been better suited as a mini-series instead. Alternatively, a couple more rewrites and a better editor at the helm could have easily shaved off an hour, making the whole experience much more palatable.

Overall, Redbad is an ambitious project which may have overreached its limitations. Aptly shot on a low budget, its main issue lies with the script. If you’re a fan of the medieval genre and can get past the long running time then you may be able to find some enjoyment. A melodramatic, retelling of a legendary figure, Redbad is a zealous attempt at creating a new action epic.

Redbad is a 2018 Dutch drama film directed by Roel Reiné.[3] It is based on the life of Redbad, the medieval king of Frisia. The film was intended as the middle part of a trilogy about iconic Dutch heroes, starting with the film Michiel de Ruyter about 17th century admiral Michiel de Ruyter and ending with a film about William of Orange.[4]

The film was shot in the prehistoric village-museum in Eindhoven,[8] De Alde Feanen National Park,[9] Ameland, Moddergat,[10] the Wadden Sea, Denmark, the German city of Wallsbüll and the Bouillon Castle in Belgium.[5] The film was shot in 42 days and used more than 10,000 extras, which is a record amount for a Dutch production. The final shooting day was on 19 November 2017.[11] The sound for film movie was produced by Dolby Atmos.[12]

Before the film’s release it was already sold to multiple countries and territories, among them Germany, France, China, Spain, Turkey, South Korea, Poland, Romania, Hungary, Slovakia, the Czech Republic, the Middle East and the Commonwealth of Independent States.[13] In February Epic Pictures Group bought the North American distribution rights.[14] Early testfootage of the film was shown on 31 March and 1 April at Dutch Comic Con in the Jaarbeurs in Utrecht.[15]

In May 2018, the producers of the film announced that YouTube and Facebook had sent an email to them that they would not show the trailer of the film on their platforms because it was considered offensive to large groups of people. Producer Klaas de Jong also mentioned he got hundreds of angry mails from Christians who did not agree with their depiction of historical events.[16]